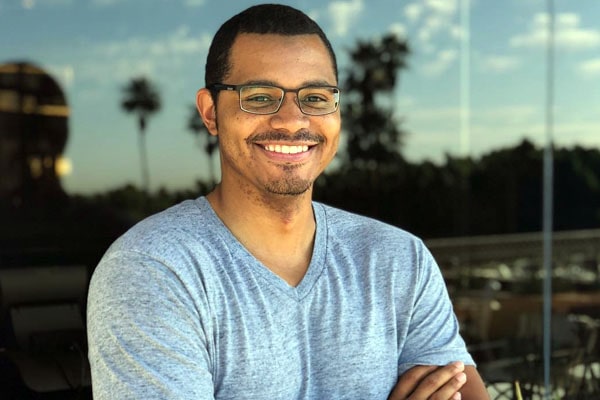 David Adkins, famously known as Sinbad, is an important member of the American Entertainment Industry. The stand-up comedian and actor is popular among his fans for his charismatic roles in the 1990s TV series like A Different World, The Sinbad Show, and many others. Similarly, he has also starred in dozens of hit movies such as Houseguest, Necessary Roughness, First Kid, and Jingle All The Way.

Unfortunately, Adkins was put in a surgically induced coma after suffering a stroke. Thankfully, he is showing recovery at present. Apart from his professional achievements, Sinbad is a family man with a loving wife, Meredith Fuller, and two grown-up kids, a son and a daughter. Here, in this article, get to know a little about Sinbad’s son, Royce Beckly Adkins.

Sinbad’s Son, Royce, Is A Director And Comic Writer

Royce Beckly Adkins followed the footsteps of his dad in the American Film Industry. However, he serves in the industry not as an actor but as an independent filmmaker, writer, and producer. Also, Adkins is prominent for his services in the sound department of several films and tv-series. To date, Sinbad’s son, Royce, has worked on numerous movie and television projects, and there are no signs of him slowing down.

The son of former US Air Force’s boom operator Sinbad, Royce Adkins began his career in the entertainment field as an Assistant Audio Engineer. He helped musician Everette Harp in the recording and mixing of his album ‘First Love‘ for a month. Then, he joined G4 TV as its Production Assistant and Morgan’s Mark as Electric Production Assistant.

Similarly, Sinbad’s son, Royce, also worked as a camera operator for behind the scenes footage for his dad’s film, Sinbad: Make Me Wanna Holla‘s special DVD release and even worked as a specialist in Apple Store with his dad for five months. In 2015, Royce got to write, direct, and edit a short film, “Retrospect,” which gained an impressive number of fans. Since then, he has bagged numerous feature and short films on his name as a production sound mixer, camera operator, and many other roles. Some of the projects Royce worked on include JINN, No Diggity, Bashment, Stolen Breath: The Truth Revealed, Express Yourself, and many more.

Furthermore, the Los Angeles Recording School graduate Royce has a comic book series called ‘BioPunks‘ to his name. Similarly, the owner of Royce Productions, Royce even served as a director and editor of several music videos by his sister, Paige Bryan, such as Finally, Firefly, Take a Picture, Higher, and You Gon’ Learn.

Royce’s Dad Influenced Him To Be In Film Industry

Soon after the independent filmmaker Royce Adkins released his short film ‘Outcast‘ which starred actor Gui DaSilva-Greene, Black Action Stars interviewed him. During the interview, Adkins told the magazine that his dad, Sinbad influenced him to be in the film industry. As a result, Royce wrote, directed, and produced Outcast while his father, Sinbad, contributed as its executive producer.

According to Royce Adkins, his father, Sinbad, influenced him on set when he was younger. While he was on set with his dad, it initially did not make him want to become a filmmaker. However, after being around it for many years, Royce liked the set life atmosphere. When his parents took him to watch ‘Toy Story‘ when he was six, it made him want to tell stories. He spent the next several years doing experiments with animation, filming, and learning to draw. He was unsure which path he wanted to go down to but did know that he wanted to tell stories.

In the present, Sinbad’s son, Royce, is gradually making his name in American showbiz as a writer, director, producer, and comic book author. His father always guided him in directing and told him to put his camera in his hand and begin shooting. At first, he wanted to do the animation thing, which he thought was his true calling. However, later he realized that it was not for him. So after high school, he decided to make film making his main focus, and he is quite successful in it.

Youngest Child Of Sinbad With His Wife Meredith Adkins

Royce Beckly Adkins is the youngest child of Sinbad with his gorgeous wife, Meredith Adkins. He has an elder sister, Paige Adkins, who is also in the American Entertainment Field. Royce’s sister, Paige, is famous for her roles as an actress and producer in Friend Request, Sinbad It’s Just Family, and Seed of a Legend.

Sinbad’s son, Royce Beckly Adkins, is slowly achieving success in moviemaking. Seeing his dedication and hard work in his chosen field, it seems like soon he will outshine his celebrity father. Sinbad must be proud of his multi-talented son.

ALSO READ: Learn About All Of Paul Schneider Children

A Married Man With A Toddler Son

The grown-up son of Sinbad, Royce Adkins, is a family man. Royce Adkins married Bianca Renee Today on 18 July 2016, in a private ceremony attended by their close friends and family members. Royce Adkins’ wife, Bianca, is a curly hair enthusiast and YouTuber. It’s been over four years since the couple embarked on their marital journey, but the love between them is still as fresh as new. Their love for each other and strong bonding can be seen on their respective social media pages.

Sinbad’s kid, Royce Adkins, is also a fortunate dad of a toddler son with his beloved spouse, Bianca. They named their son Jalen Sky Adkins who joined the family on 8 February 2020 at 12:06 am, weighing 8 lbs 1 oz. The jolly parents even have an Instagram page of their family where they often post pictures and vlogs of their little boy to help better understand their new phase in their life.

The birth of Royce Adkins’ son made Sinbad a grandfather. He is delighted with the new title and enjoys his time as a grandpa to little Jalen. It is heartwarming to see the famous stand-up comedian share beautiful moments with his son and grandson. We wish the Adkins family all the love the world has to offer.

The boy name Royce is of English Origin, which means son of the king.