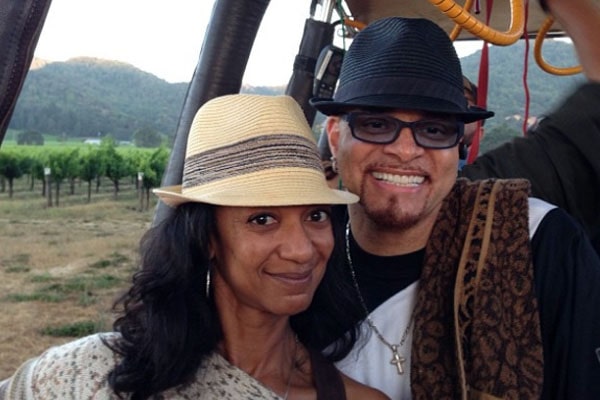 David Adkins, popular by his stage name, Sinbad, is one of the world’s leading stand-up comedians and actors. First, he came to prominence in the 1990s for his performance on stage and numerous TV shows. Some of the TV shows starred by Sinbad include the famous sitcom ‘A Different World‘ and the film ‘Jingle All the Way.’ He also had his own show named ‘The Sinbad Show‘ which aired on FOX network for a while in the late 90s. Before joining showbiz, Sinbad served as a boom operator in the US military. Sadly, the US Air Force dishonorably discharged him in 1981 for frequently going AWOL.

One of the greatest comedians, Sinbad, married the same woman, Meredith Fuller Adkins, twice in his lifetime. Here, get to know some more about Sinbad’s wife, Meredith Adkins, and if they are still married or not.

Aforementioned, Meredith Adkins and Sinbad married twice. The pair walked down the aisle together for the first time in 1986. They met at Wichita State University while Sinbad was at Wichita’s McConnell Air Force as a part of the US military and married some months later. Comedian Sinbad admits that at that time he married Meredith, he was not ready to be in a marital bond. As a result, they could not stay together for long and divorced in 1992.

A decade after the official separation in 1992, Meredith and Sinbad decided to reconcile. They retook their wedding vows in 2002, and to date, their marriage is going extremely well. During a talk with Black America Web in 2018, Sinbad said that living apart is a key to their successful marriage. He added that after remarrying Meredith, he kept his house for five years so that he could go there whenever he got mad or needed his own space. Though Sinbad and Meredith currently live together, Sinbad still moves next door whenever conflict arises between them.

So the main point is that Sinbad is still married to his wife, Meredith Fuller Adkins. Sinbad’s wife, Meredith, is always there for him in every ups and down of his life. The husband-wife duo is enjoying their happily married life. Their love and dedication to one another can be seen clearly on their social media posts. Sinbad and his spouse enjoy spending time together traveling to various places and attending different functions.

Meredith Is A Mother To Two Kids With Sinbad

Sinbad and Meredith’s togetherness has blessed them with a daughter, Paige Adkins, and a son, Royce Beckly Adkins. Meredith Adkins gave birth to both of Sinbad’s children before their divorce. She lived as a single mother and raised her kids during her time apart from Sinbad.

Meredith and Sinbad’s daughter, Paige Adkins, is the eldest of two kids. She is currently engaged to performer Byron L. Hopkins. Like Sinbad, Paige is also in the American Entertainment Industry but as a singer, songwriter, and actress. Similarly, Meredith’s son, Royce, is in a marital bond with his wife Bianca Renee Today and has a son, Jalen Sky Adkins.

Meredith always supported her kids in their careers. She even served as her daughter, Paige’s manager, while she chose to pursue a career in music. Meredith’s Instagram is full of photos of her children and grandchildren, which shows that her kids are always her top priority.

Mrs. Adkins Has Some Movie Credits To Her Name

Sinbad’s wife, Meredith Adkins, is also in the American Film Industry as an actress and producer. She is famous as a producer of a couple of short shows and dramas directed by her son, Royce Adkins. Some of them are The Girl With No Brain, Retrospect, and the latest short film, Outcast.

Happy Birthday to this wonderful young man!! @sinbadbad As the youngin’s say, you are my ride or die!❤️ pic.twitter.com/gr0rK7iGLa

Furthermore, the 1980 SM East graduate, Sinbad’s spouse, Meredith Adkins, even starred in her family show ‘Sinbad: It’s Just Family‘ along with her husband and kids. According to some online magazines, the strong believer in god, Meredith even worked as an accountant while she was a single mom to help raise her kids.

Nevertheless, Meredith currently lives a comfortable life with her husband, Sinbad, and her kids. Going through her social networking handles, she does not seem to be engaged in any profession at the moment. It looks like Sinbad’s wife, Meredith Adkins, is a homemaker at the moment, and she is enjoying her marriage with him.