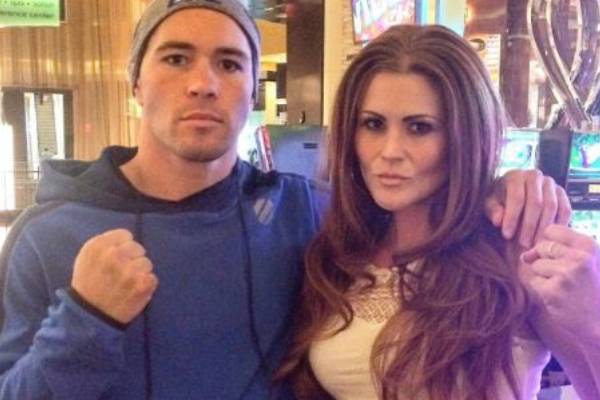 Colby Ray Covington, also known as Colby Covington, is a professional MMA fighter. He currently competes in the welterweight division of the Ultimate Fighting Championship (UFC), where he was #1 as of June 2021. He is one of the famous fighters of the UFC.

Colby has been in the limelight for quite a long time now, and hence his family members have also become famous. He is one of three children and the only son of his parents, Noelle Covington and Brad Covington. Among his two siblings, let’s learn in detail about Colby Covington’s sister Candace Covington and what she does.

One Of The Daughters Of Her Parents

As mentioned earlier, the popular MMA fighter Colby has two sisters. His parents welcomed three children, including him.

Colby Covington’s sister, Candace Covington, is older than him. However, it is not known when she was born as her birth details have been kept private by her and her dad and mom. Similarly, apart from Colby, Candace also has a sister named Callie Covington.

Likewise, it is not known when Callie was born. The Covington siblings share a great bond. Furthermore, Candace often shares lovely pictures with her brother and sister on her social media. Although not much is known about their childhood, Candace and her siblings must have grown up having a wonderful time together.

Colby Covington’s Sister Is A Dancer

Colby has made a good name for himself in the martial arts world. As an MMA fighter, he must be taking care of his diet and fitness. Like him, Colby Covington’s sibling is also into fitness. On her Instagram bio, she has described herself as a health and fitness coach.

Candace used to work as a fitness coach at Orangetheory Fitness. Moreover, she is also into yoga and currently works as the lead instructor at SPENGA. She has also uploaded most of her fitness videos on her Instagram.

A post shared by Candace “CAN DANCE” Covington (@candance143)

Besides being a fitness enthusiast, Candace is a pro dancer and choreographer. She received her Diploma from Thurston High School, where she went for four years from 1996 to 2000. Then, she attended Lane Community College in 2001. She graduated from the college in 2003 with a degree in Associate of Arts (A.A.) and Dance. She even took communications as a minor.

Furthermore, Candace is a former Ice Dancer for NHL’s Florida Panthers and Sacramento Kings Dancer at Sacramento Kings. She has experience of working as a Zumba and dance instructor at different studios. Candace danced professionally for the first time in Dare to Dance. Like her fitness videos, she has also posted her choreography and dance videos on her Instagram.

Candace has earned significant fame in her profession. She must also be earning considerably.

Candace Is A Number One Fan Of Her Brother

As mentioned earlier, Candace Covington’s brother Colby Covington has gained significant fame and fortune in his professional career. Because of his exemplary playing skills, he has a huge fan following around the globe. Although many people admire him, Colby’s sister, Candace, seems to be the one who is his number one fan.

Going through her Facebook and Instagram, we can see that Colby Covington’s sister has posted several pictures of the brother-sister duo by expressing her love and support for him. Furthermore, in November 2021, she was present at Madison Square Garden to see her brother fight against Kamaru Usman at UFC 268.

Unfortunately, Candace’s brother lost to Kamaru. But, she was not happy with the result and believed it was unfair. On her Instagram live, she shared that it didn’t feel like they lost as everyone knew and watched who the real champ was. Well, Candace has over 10K followers on her Instagram so there is no doubt that many of them agreed with her.

In her second post, Candace wrote that she was proud of her brother for breaking Kamaru’s zero takedown stat. Apart from this post, Colby Covington’s sister has posted time and again about how much she supports him and how proud she is of him.

Well, the MMA fighter must be fortunate to have such a caring and supportive sibling like her. Similarly, Colby is undoubtedly supportive of his sister.

Sadly, Candace suffered severe injuries in 2017. She had broken ribs on top of her heart, an injured spinal cord, and nerve damage throughout half her body. Moreover, her left arm and left leg were inoperable in the fitness sense but were operable for daily movement.

Candace had difficulty eating, breathing, sleeping, and going to the bathroom. Overall, it was difficult for her to perform her daily tasks. However, she has not revealed what exactly was the reason behind her condition.

Colby’s elder sibling has talked about her healing journey on her YouTube channel, The CanDance Chronicles. In one of her Facebook posts, she stated that she had to go through all those difficulties after someone was negligent with her body.

While she was struggling with the injuries, Candace was also baptized. It took nine months for her to be released from doctors, neurologists, physical therapists, and after that, she started at-home treatments and physical rehab on her own.

After a lot of hard work and treatment, Candace is able to do everything now. In her video, she has mentioned that she is thankful to everyone who was there for her at the time of difficulty.

Who Is Candace Covington’s Boyfriend?

However, she has remained quiet about her lovelife. As a result, it is not known who Candace Covington’s boyfriend is. But, anyone dating such a brave and cheerful girl like her must be fortunate.

Nevertheless, Candace seems to be living a great life. She often goes to several places for vacation. Let’s hope she continues to live her life to the fullest.