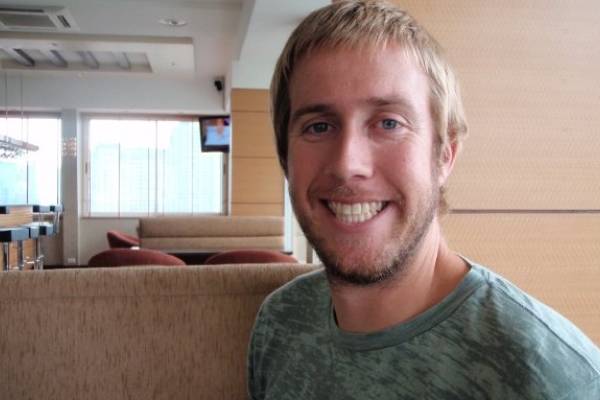 Bradley Keenan shares a blissful marital life with the professional beach volleyball player April Ross. They have been married for a long time, and their marriage is still going strong.

As fans are curious about April Ross’s husband, so here are some of the interesting facts about him.

As stated earlier, the famous volleyball player, April Ross, is enjoying her blissful married life with Bradley Keenan. The couple tied the knot on November 22, 2010. After dating for three years, they tied the knot in a beautiful wedding ceremony.

According to Heavy, in an interview, Bradley Keenan’s wife, April Ross, described their wedding as one of the funniest nights of her life. She also mentioned that after completing the special ceremony, she jumped in a swimming pool with her wedding dress on. Similarly, in other interviews, Bradley and April have talked about their support for each other and how they motivate each other to thrive for the best.

Talking about their children, Bradley and April haven’t revealed anything about their kids. However, some sites suggest that Bradley is the doting father of two kids, daughter Peri and son Wells.

Used To Be A Volleyball Player

Just like her wife, Bradley Keenan, used to play beach volleyball. He attended Pepperdine University, and while there, he won AVP Rookie of the Year in 2006 and also became a four-time All-American. Furthermore, in 2014, he was even inducted into the Pepperdine Hall of Fame.

After his successful college career, April Ross’s husband, Bradley, began his professional beach volleyball career with John Mayer. They won the three qualifier matches in 2006. In 2007, he won Most Improved AVP Player. Along with the title as AVP Best Server in 2014, Keenley and Mayer won the first AVP tournament of the season in St. Petersburg, Florida.

The same year, Bradley’s wife April also won her first AVP tournament of the season in St. Petersburg, Florida, with Kerri Walsh Jennings. In an interview, April stated that the day that both of them won together was one of her favorite days playing volleyball.

In addition, April Ross’s husband, Bradley, won $433,988 in his professional beach volley career. Thus, he seemed to had a successful career from 2006 to 2015. However, he stopped playing in order to pursue his career as a coach.

On the other hand, Bradley’s wife is currently participating in the Tokyo Olympics 2020 with her partner, Alix Klineman. The pair are eyeing the gold medal and is on their way to win.

Works As A Head Coach

In May 2016, Arizona State University hired Bradley Keenan as its full-time beach coach. He joined ASU’s restructured volleyball staff, which was led by first-year indoor coach Stevie Mussie as overall director. In an interview, Mussie expressed that he was thrilled to welcome him to the Sun Devil Family.

In addition, Stevie said that Bradley’s name kept coming up throughout the interview process, and many high-level people of volleyball across the country spoke about his abilities. After seeing him on campus, there was no doubt in Stevie’s mind; as a result, he hired Keenan as the head coach.

Furthermore, April’s husband, Bradley, also expressed how excited he was to join them. He added that he was super excited to work with incredible athletes at ASU and even thanked Stevie for giving him the opportunity.

Before joining Arizona State University as the head coach, Bradley has worked in several other fields. He worked as Pro tem and volunteer assistant coach for the Women’s national volleyball team from May 2015 to May 2016.

In 2015, Bradley had joined the Concordia University men’s volleyball program. There he earned his Master’s in Exercise and Sports Science. He had also worked as a graduate assistant at the university from January 2015 to May 2016. From September 2003 to September 2005, he worked as an account executive at State Street.

Is Rumored To Be Divorced

As mentioned earlier,  April Ross has been married to Bradley Keenan since 2010. However, according to some online sources, the couple got divorced in 2018. However, there is no concrete news on if the news is true. Furthermore, April has not posted any pictures of them recently and many have speculated that they could have parted away.

Despite the fame, April’s hubby Bradley seems to be a private person. He seems to be preferring his life away from the media and the limelight. Nevertheless, we hope that we get to learn more about April Ross’s husband, Bradley Keenan, in the coming days.