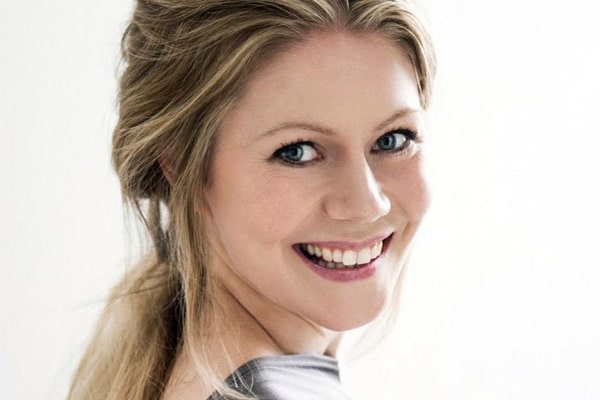 The “Kingsman: The Secret Service” star Hanna Carolina Alstrom is a famous figure in the film industry since she started back in 1988 in Sweden. Alstrom also happens to be Katherine Langford‘s co-star in Cursed and Gustaf Skarsgard’s ex-wife. She has collected quite a fame in all her career. Along with her soaring popularity, her fans are being concerned about her personal life along with her professional life.

So, here we are with some pieces of information about the internationally known Swedish actress Hanna Alstrom. Know some facts about her here.

Hanna Began Her Acting Career At The Age of Five

Stockholm, Sweden, born Hanna, had a great passion for acting since her early days. At the age of five years, she joined at “Unga Teatern‘, a reputed and oldest theatre in Sweden with her then 11-year-old sister. One year behindhand at the age of six, Alstrom appeared in the play Gränsland by Staffan Gotestam.

Hanna’s starting line in films is as impressive as her movies. Alstrom was just seven years old when she played the second lead role of ‘Berit‘ in a short family movie ‘Gull-Pian.’ It was her first move in the Film Industry. The next role for Alstrom on the Screen was five years later in 1994 in Swedish comedy TV Series ‘Bert.’ Since then, the talented Hanna starred, and guest appeared in various TV shows as well as movies.

Later, Hanna Alstrom played some child roles at the Royal Dramatic Theatre. She joined the Swedish National Academy of Mime and Acting to sharpen her acting skills.

Hanna Alstrom is the younger sister of the ‘Sebastian‘ star Sara Alstrom. As mentioned earlier, the Alstrom sisters began their acting career together, joining the “Unga Teatern’ theatre. Then, they moved on to perform on other theatres such as the Grona Lund and Puckteatern.

Sara also has played several roles in movies and TV series. Some of her notable movies include Badhuset (1989), Sebastian (1995), and 9 millimeters (1997). Moreover, she is also the cast member of Swedish soap operas Rederiet and Vanner Och Fiender.

The Swedish acting diva Hanna has been in the acting field for three decades now. Her filmography credit includes both Swedish as well as international movies. Some remarkable films of Hanna are Nya Tider, Sherdil, Karlek 3000, Crimes of Passion, The Glass Room, and more. But she got noticed by the public only when she starred in the movie Kingsman: The Secret Service in 2014. In the movie, she appeared in the role of Princess Tilde of Sweden.

Hanna also appeared on the same role in the movie’s sequel Kingsman: The Golden Circle, released in 2017. It paved her way to star in another Czech drama film, The Glass Room, in 2019.

Hanna Alstrom and Gustaf Skarsgard met for the first time on the set of horror three-part TV mini-series Skuggornas hus which translates to Shadow House in 1996. Both of the Swedish actors played side roles in the mini-series. Furthermore, they starred in short film Dyslexia alongside each other. Frequent meetings and working together brought them closer, which eventually turned them into lovers and started dating each other.

The ex-couples, Hanna and Gustaf, walked down the aisle in 1999. In 2002, they portrayed themselves as an on-screen couple, too, in the series Cleo. Gustaf played the role of Jonas, whereas Hanna was his love interest, Anja.

Their marital knot did not stay tight for long, though. With no children in the period of their marriage, the fellow co-stars as well as love birds legally separated in 2005. As for now, Hanna is enjoying her singleton life.

The First Acting With English As Major Language

Many TV series and movies that Hanna appeared in has been translated into English and several other languages over the years. However, the first acting credit for Alstrom in English as a major language goes to the TV Series ‘Welcome to Sweden’. She appeared only in Season 1 Episode 5 Fitting In as Anna.

Kudos to Welcome to Sweden as it’s the series which helped Hanna to land a major role in ‘Kingsman: The Secret Service‘ and many more.