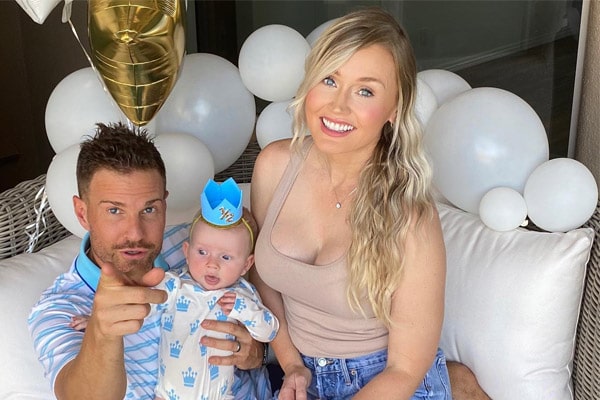 Blair O’Neal is one of the greatest women in golf. O’Neal is an American Model, influencer, and a professional golfer. The Arizona University stand-out, Blair, is famous for being one of the most beautiful women in golf. Also, Blair O’Neal won the Golf Channel’s BIG BREAK: Dominican Republic and was the runner up on BIG BREAK: Prince Edward Island. As a model, O’Neal has been featured in numerous fashion magazines and walked on several runways.

The expressive host of various Golf Channel Programs, Blair O’Neal is married to Jeff Keiser since 2013. Although gorgeous beauty Blair is very secretive regarding her married life, we have collected some details on her husband. So, here, in this article, learn the unknown facts of Blair O’Neal’s husband, Jeff Keiser.

Married To Blair O’Neal Since 2013

Golf Channel host, Blair O’Neal, took the wedding vows with her long-time boyfriend, Jeff Keiser, on 29 April 2013. Though O’Neal rarely talks about her marriage and other details of her husband to the public, she occasionally shares her man’s pictures on her Facebook and Instagram. The couple’s photos together make us assume that they are enjoying their happily marital life to the fullest.

After marriage, Jeff Keiser began appearing in golf-related events with his wife, Blair O’Neal. Besides, he and his better half spend some romantic time together, taking some break from their busy schedule. Blair O’Neal’s husband, Jeff, seems to be in so much love with his wife and supports her in every stage of her life. We hope the love bonding between Blair and her spouse, Jeff, keeps increasing till eternity.

Has A Son With Wife Blair O’Neal

The seven years long contented and blissful marital life of Blair and Jeff rewarded them with lots of understandings, love, and care for each other. And mainly, their relationship made them a proud parent of an adorable son named Chrome Andy Keiser.

Jeff Keiser’s wife, Blair O’Neal, welcomed their baby boy, Chrome, amidst the height of a global pandemic COVID-19 on 7 April 2020. Junior Keiser joined his family healthy at 5:47 a.m., weighing 8 pounds, 1 ounce. Blair had put herself on strict quarantine before giving birth to her son so that the pandemic does not affect her pregnancy.

The jolly couple, Jeff and Blair, brainstormed their baby’s name while on a road trip. They came through different words, like colors and metals. However, Jeff finally threw out the name Chrome when he looked down at their car’s handle and finalized it. Moreover, the overwhelmed parents, Blair and Jeff, already have an Instagram account for their son, Chrome, though it is private at the moment.

Worked As A Caddie Of His Wife

The handsome husband of Blair O’Neal, Jeff Keiser, accompanied his wife in almost every golf tour in the past. Either it is the Symetra Tour or other tours on which Blair battled to earn an LPGA Tour card, her partner, Jeff, was always there as her caddie.

In 2014, Blair O’Neal competed in the inaugural BIG BREAK INVITATIONAL, Reynolds Lake Oconee, which broadcasted live on Golf Channel. Jeff caddied his lady there and enjoyed a stay at the award-winning RITZ-CARLTON Reynolds. Also, the pair experienced the local community together.

When Blair was six months pregnant, she played at the Diamond Resorts Tournament of Champions. She eventually finished the day in sixth place on the celebrity board. At that time also, her husband, Jeff, was there as her caddie. Keiser was also in charge of making sure his spouse stays rested and comfortable. Jeff was well-prepared with all the little things like sun umbrella, healthy snacks, and made sure Blair takes enough rest during the game. Blair really has got such a caring and loving life partner.

A Senior Director Of Finance At PetSmart

The graduate of Arizona State University, Jeff Keiser, served in various other companies before joining the PetSmart. He worked as a Staff Accountant at eeCPA, an Associate of Simon Consulting, LLC, and a Senior Manager at KPMG for some years before joining PetSmart.

Going through the work experiences of Blair O’Neal’s husband, Jeff Keiser, he must have accumulated an impressive sum of money to his net worth. The husband-wife duo, Jeff and Blair, undoubtedly live a lavish life appreciating their love for each other.

If you go through the official website of Blair O’Neal, you can see the contact information of Jeff Keiser listed there. It means Blair O’Neal’s partner, Jeff, is also in charge of the Sports Management LLC and other events related to Blair.

All these dedications and attachment of Jeff with his beautiful wife, Blair, prove that their married life is running smoothly and full of understandings. Blair O’Neal’s husband, Jeff, is a real example of a dedicated husband, and we hope it lasts forever.