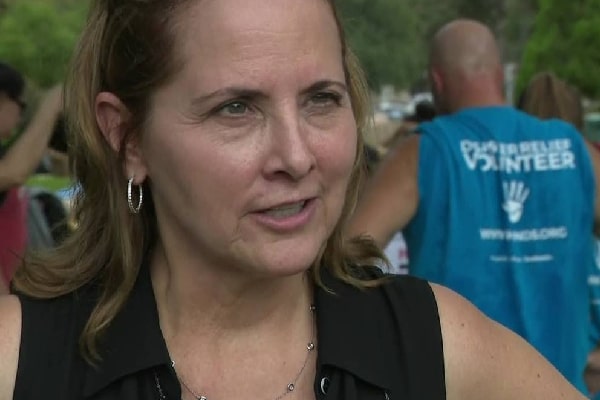 Mike D’Antoni is considered one of the greatest coaches in NBA history and is mostly known for acclimating his European style to this current NBA player crop.

Besides having a serious career, Mark D’Antoni is happily married to his basketball enthusiast wife, Laurel D’Antoni. The D’Antoni couple has been together for over thirty years and is still celebrating their love. The parent of a son, Mike and Laurel, lived in New York while their kid enjoyed being a standout on the school’s basketball team.

Therefore, here is everything you need to know about Mike D’Antoni’s wife, Laurel D’Antoni.

Used To Be Former International Model

Rockets’ coach, Mike D’Antoni, is known for his career as a coach and former basketball player. Alongside Mike, we can always see his wife, Laurel, tagging along and helping him become a better man.

Likewise, while talking to the NY Post, D’Antoni’s wife was asked if she had pictures of her modeling days. Instead of an answer, she quipped, ‘With clothes or without?’. Laurel further remarked that life is too short not to live it to the fullest. Maybe that’s the reason she planned marriage within ten days.

Well, Laurel D’Antoni retired from modeling in 1990 to do a sports segment for Italian TV. Presently, she is enjoying a blissful marriage of 32 years.

Married To Mike D’Antoni For More Than Three Decades

Life takes an unexpected turn as one can meet a soulmate anywhere, even when you are out there on vacation or a business tour. Such an incident happened with Mike D’Antoni and his beau, Laurel.

The pair met in Italy, where D’Antoni used to be a point guard and Laurel, a runway model. In an interview with NY Post, Mike D’Antoni’s spouse recalls eating pizza with her girlfriend and her former boyfriend, Wally Walker, who introduced her to Mike.

Laurel further remembers D’Antoni’s question if she’d join him in a game. The pair fell head-over-heels for one another and were already planning their marriage within ten days of the meeting. Can anybody imagine that in the present day? HECK NO!

Although Mike and Laurel dreamt of marriage hastily, they dated for a couple of years before sharing vows in 1986. They welcomed a baby boy, Michael D’Antoni, after seven years into marriage, and he has maintained his privacy and whereabouts a secret to date.

Born in San Diego and raised in San Juan, Puerto Rico, Laurel D’Antoni has overcome a lot and sacrificed for her family. As of now, Laurel serves society as a cheerful philanthropist.

Being a human, one of the greatest feelings is their sense of compassion. Such is Mike D’Antoni’s wife, Laurel D’Antoni. She has been passionately participating in charity works for ages alongside her coach husband.

Furthermore, the Communication major graduate, Laurel, has dedicated her time to sports and bring visibility to those in need. Moreover, she has chaired many non-profitable events and volunteer activities. Likewise, Laurel helped raise $1.4 million for Hurricane Harvey recovery in late 2019.

Moreover, the Texas School Public Relations Association named Mike D’Antoni’s spouse the inaugural recipient in 2018. Unfortunately, the D’Antonio couple announced their departure from the Houston Rockets in September 2020. However, they remain one of the crucial members of the league.

The Rocket’s Women’s Organization immeasurably appreciates Laurel’s hard work. Despite enjoying a massively successful career, the coaching couple still loves sharing a ride. They believe it as dates, as they catch up on their day-to-day lives.

They not only share every night but a car regularly. Given that both partners have hectic schedules, Laurel and Mike take their car ride as a date. The car-sharing ritual started when former Houston Rockets coach started his coaching journey at the New York Knicks.

Furthermore, it made sense to discuss potential professional issues and spent some quality time while dealing with the hectic NYC traffic. The car-sharing thing has now become a mandatory routine but with the same enthusiasm.

Laurel Was Rescued By Boat After West Virginia Flooding

During thirty-plus years of marriage, Mike D’Antoni’s life partner has experienced several incidents together. The thrill of winning the championships, the excitement of working together, and shared mutual sorrow of loss. But the D’Antoni couple also faced the wrath of nature together.

According to ESPN, Mike D’Antoni’s wife, Laurel, was rescued by boat as she was amongst the residents obliged to leave their homes in West Virginia because of rainstorms and flooding in 2016.

Furthermore, Laurel D’Antoni’s coach husband assured the house’s minimal damage and confirmed everybody’s safety. Along with their two cats, Laurel was boarded in a boat and left their offseason home at The Greenbrier.

Although Mike was in Houston working the NBA draft, it must have been one of the scariest times.

Consequently, Mike D’Antoni’s wife, Laurel, is his most prominent critic and motivates him to be the best. Therefore, let’s hope the love between the D’Antoni couple remains the same until the end.