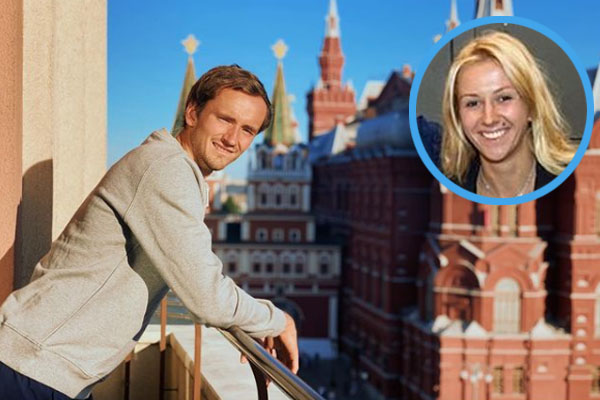 The Russian professional tennis player Daniil Medvedev is a well-recognized face in the tennis circuit. His professional achievements are crystal clear to his fans and media people. However, his personal life, including his wife and children, is still a hot topic for everyone who shows interest in him.

So, here, let’s learn 7 interesting facts about Daniil Medvedev’s wife, Daria Medvedeva, and get to know her better.

Beautiful Daria Medvedeva has been happily living as Daniil Medvedev’s spouse since 2018. The couple tied the knot in a private ceremony before Daniil played in the Davis Cup for Russia in September 2018. Daniil and Daria recently celebrated their third wedding anniversary. And, it became one of their best marriage anniversaries as Daniil beat the World no.1 Novak Djokovic to clinch the 2021 US Open title.

After winning his maiden Grand Slam title, Daria’s husband, Daniil, revealed that he had no time to get her a wedding anniversary present. So, his only option was to win the title, and he did it. The US Open even shared a video of Medvedev’s loving note for his lady, Daria, on their official Instagram handle.

According to reports, Daniil first met his future wife, Daria, in 2014. Eventually, they started dating and lived together in Antibes, France. The beautiful couple dated for four years before they decided to live their remaining life as a husband and wife. They first moved to Monte Carlo, Monaco from Antibes, in 2017 and married a year later.

So, the togetherness of Daniil Medvedev and Daria Medvedeva has crossed more than half a decade. But still, they are rejoicing their relationship with immense love, care, and support for one another.

More than six years of togetherness of Daria Medvedeva with Daniil Medvedev has blessed her with lots of love from her partner. However, it looks like she is yet to enjoy the feeling of motherhood.

But as both Daria and Daniil are very secretive concerning their personal life, they have not revealed much about when they might welcome a baby into their lives. So who knows, the couple might surprise everyone by introducing a new member to their family shortly.

Daniil Medvedev’s wife, Daria Medvedeva also used to play tennis in the past. According to some sources, Daria was one of the top 100 junior tennis players. However, she failed to make it as a professional due to her injuries.

In a media interview, Daniil said that his wife played tennis until she was 17 or 18. However, due to injuries, she could not reach her desired level.

Nevertheless, Daniil feels great that his better half, Daria understands tennis. She understands that they can’t go shopping before the game. Also, Daria knows that her husband can be busy from morning until evening due to training. Daniil said that it has helped him become better as a player and a person.

After an abrupt end to her tennis career, Daria Medvedeva opted to pursue a career in journalism. Daria earned her degrees from Moscow State Institute of International Relations and Lomonosov Moscow University.

So, after gaining a degree in journalism, Daria might be currently involved in the journalism field. But, sadly, her exact source of income or her profession is still not available to the public.

Moreover, Daria is mostly seen with her husband’s team while Daniil is playing. So, she might have a permanent job as one of Medvedev’s team members.

Lucky Charm For Her Husband

Daniil Medvedev has often commented on his wife in numerous media interviews. During a press conference in 2019. he said that his significant other, Daria is one of the important members of his team. She gave him a lot of confidence, and it was the moment he proposed to her when Daniil began to find significant success in his career. Daniil believes that Daria has always been a lucky charm for him.

Furthermore, according to Medvedev, Daria takes care of the small things in his life. It is the reason he can focus on his aim to play tennis and win the games. Moreover, it helps Daniil to focus on his game and sharpen his skills.

Moreover, Daria’s famous spouse, Daniil, also confessed that she showed him the beauty of life. So, he wants to spend his entire life with her and celebrate his every victory with her.

The supportive wife of Daniil Medvedev, Daria Medvedeva, can often be spotted attending her man’s matches and cheering him on. For example, she was there at the 2019 Western & Southern Open when he defeated Novak Djokovic.

Similarly, Daria watched live when her spouse won his first Paris Masters title by defeating Alexander Zverev of Germany in Paris on 8 November 2020. She was also there when Medvedev clinched his maiden Grand Slam title at the 2021 US Open.

Moreover, she also attended the 2021 Australian Open at Melbourne Park, where Djokovic defeated Daniil in the men’s singles final round. Upon the defeat, her man angrily destroyed his racquet. Then, TV cameras immediately cut to Daria while she was furiously looking at him.

Nevertheless, Daria is always supportive of her husband, Daniil. Whether he wins his match or loses it, she is always there by his side as his biggest supporter and motivator.

As of now, you might have already found out that Daniil Medvedev’s wife, Daria Medvedeva, is an extremely private person. She does not prefer to show herself off before the media or talk to the reporters.

On top of that, privacy-loving Daria does not have any social networking accounts. As a result, most of Daria’s details are still under the radar. But, hopefully, we will get to be familiar with Medvedeva and know her personal and professional life in the upcoming days.