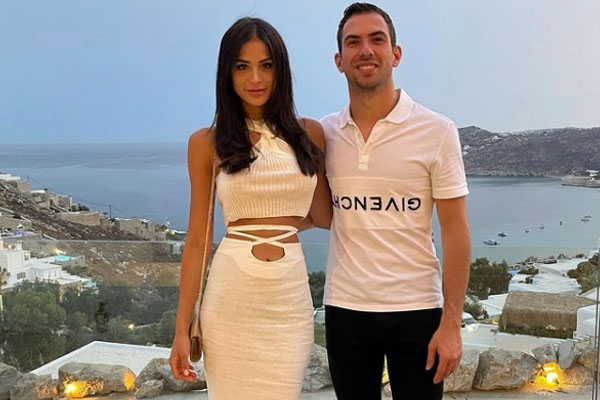 The wives and girlfriends of the 2021 Formula One drivers are under excess media scrutiny at the moment. And one of them is the Canadian-Iranian-Italian racing driver Nicholas Latifi‘s girlfriend, Sandra Dziwiszek. She came into the limelight after being romantically linked to the famous F1 driver, Latifi, who is currently competing for Williams under the Canadian Flag.

So, here, let’s get familiar with the current love of Nicholas Latifi, Sandra Dziwiszek, who completed a Master’s degree in Law in 2017.

Nicholas Latifi’s Girlfriend Is A Certified Lawyer And A Model

The 2019 Formula 2 runner-up, Nicholas Latifi’s partner, Sandra Dziwiszek, grew up in Portugal but was born in Poland. Currently, she resides in London. Reportedly, after completing her Undergraduate Law Degree, she earned Masters of Law from a university in London in 2017.

Though Sandra Dziwiszek earned LPC LLM and became a certified lawyer, she also chose to be in a completely different field than her studies. Along with giving continuity to her career as a lawyer, Dziwiszek opted to be in the modeling industry.

According to sources, Nicholas Latifi’s girlfriend, Sandra, started her journey as a model in 2014 and is still actively involved in it. She is currently signed to an independent modeling agency based in Milano named Pop Models.

As a model, Dziwiszek has done works for various fashion companies and magazines, including Puma, Vogue, Deha, and many more. She even walked down the ramp in London Fashion Week.

Besides pursuing a career as a model and lawyer, Sandra continues to flourish as a professional Pole Vaulter. It means that she is also a sportsperson, just like her current boyfriend, Nicholas Latifi. The F1 driver must be proud to have such a multi-talented lady as his partner.

Latifi And Dziwiszek Reportedly Dating Since 2020

The social media influencer with over 37K followers on Instagram, Sandra Dziwiszek, is reportedly Nicholas Latifi’s girlfriend since the beginning of June 2020. However, the exact time and place where the current lovebirds first met is still a secret. But, hopefully, they will reveal details about their love life someday.

Though Latifi and Dziwiszek are secretive about their romantic life, they often share photos of themselves getting cozy on their respective social networking handles. Going through the lovely pair’s social media pages like Instagram and Twitter, it looks like they enjoy visiting different places during the holidays.

Moreover, their social media posts show clearly that both Latifi and Dziwiszek are very much in love with each other. Seeing their bonding, it seems like their fans might hear about the couple walking down the aisle together in the near future.

We wish the romantic duo all the best for their upcoming days.

The raven-haired beauty, Sandra Dziwiszek, often shows up on the paddock during some of her boyfriend Nicholas Latifi’s racing events. Her latest visit was at the Hungarian Grand Prix. And, obviously, it became a weekend to memorialize for both Latifi and Dziwiszek. It’s because Latifi secured his first career points in F1 as he secured the 8th position.

Hence, Latifi and his girl, Dziwiszek, extended their parties into the summer break. Together with Nicholas’ teammate and friend, George Russell, and his partner, Carmen Montero Mundt, the couple spent some time together in Greece.

With a lot more racing events to go in the future, there is no doubt that Sandra will frequently attend them to support her man.

So, at the moment, Sandra Dziwiszek is doing great as a lawyer, model, and social media influencer. While not busy with her job, she enjoys going on outings and spending quality time with her lover, Nicholas Latifi. We hope to be more familiar with her and learn about their love life shortly.