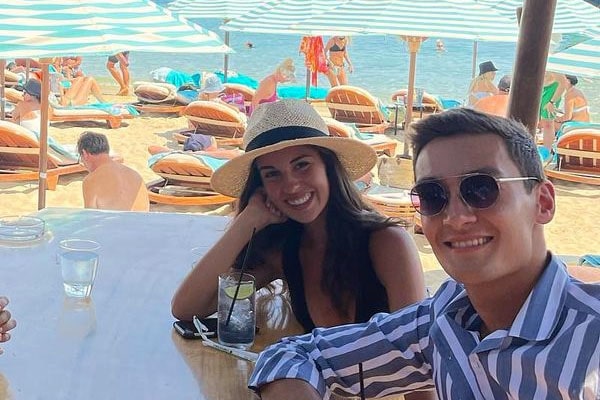 Most of the 2021 F1 drivers are committed to their respective partners at the moment. Some have already tied the knot and are enjoying their happy marital life, while others are waiting for the right time to take the next step with their current girlfriends. And, the young British racing driver, George Russell, falls in the second category.

So, who really is George Russell’s girlfriend, Carmen Montero Mundt? Let’s find out some details about her so that you can know her better.

George Russell’s Girlfriend Is In Business Management And Finance

The F1 driver, George Russell’s partner, Carmen Montero Mundt, is a graduate of the University of Westminster with a Bachelor’s degree in Business Management and Finance. As mentioned on her Linkedin page, she joined Westminister University in 2018 and graduated from there in 2021.

While pursuing her Bachelor’s degree, Carmen Montero served as a Client Relationship Internship at W1 Investment Group for some months. But, since she completed her internship from W1, it is unclear if Carmen has joined any other companies to further her career.

However, some online sources state that Carmen Montero works in Business Management at the moment. We hope she is doing well in whichever firm she is engaged in and earning a considerable amount of money to enjoy a lavish life.

Not much is known about George Russell’s relationship with Carmen Montero Mundt at the moment. However, some sources note that the couple first made their relationship public at the 2020 Tuscan GP. But, the prying eyes of media and Russell’s fans speculate that they were already together during the summer of 2020.

Ever since Mundt officially became George Russell’s girlfriend, she frequently attends her boyfriend’s racing events. For example, Mundt was there when Russell took part in the race at Silverstone. Similarly, she was in attendance during the 2021 Hungarian GP, where the Williams’ secured his first points for the team.

So, for now, Carmen Montero and George are deeply in love with one another and love spending their time together. Moreover, their relationship is strong with full support and understanding for each other. We hope to see Mundt in the limelight soon as George Russell’s wife rather than his girlfriend only.

Previous Relationships Of Mundt And Russell

George Russell’s girlfriend, Carmen Montero, made her social networking handles private after she started dating him. Therefore, the public rarely knows about her life before fame. So, it is still a mystery if she was in a romantic relationship with any other guy in the past. However, her current lover, George, was previously in a relationship with another lady.

According to The Sun, George Russell’s ex-girlfriend is Seychelle de Vries, also recognized as the racing driver, Nyck de Vries‘ sister. But their dating life did not last long, and the duo broke off within a few months of dating.

Reports say that Russell’s ex-girlfriend, Seychelle, also dated Max Verstappen. However, Max is now in a relationship with Kelly Piquet.

But, for now, George Russell is happy with his relationship with his loving girlfriend, Carmen Montero Mundt. And, could it be that the lovely couple is planning to take the next step in their lives and continue living together as a husband and wife. What do you think?