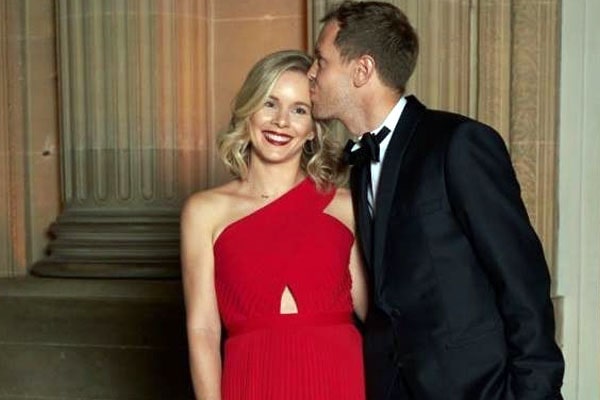 Sebastian Vettel and Hanna Prater are together since 2010. Image Source: Hanna Prater's Facebook.

Almost every driver competing in the 2021 Formula One is already in a committed relationship with their respective partners. While some of them are open about their love life, others have mostly kept quiet about their girlfriends and partners. Among those several F1 racing drivers, Sebastian Vettel is the one who is in a loyal relationship for many years and is very secretive about it.

Vettel is currently in a marital relationship with his childhood friend, Hanna Prater, whom we can sometimes see supporting her man during various racing events. So, who is Sebastian Vettel’s wife, Hanna Prater? Let’s know it all here, along with her marital life with Vettel and their children together.

Hanna Prater is one of the most loved celebrities, Sebastian Vettel’s wife since 2019. As both Vettel and his better half, Prater does not share much about their personal details; the information related to their wedding day is not available to the public yet. But, their private marriage ceremony must have been held in the presence of their family members and some other close ones.

Furthermore, Hanna Prater and Sebastian Vettel’s marriage was such a well-hidden secret that the media only found out about it when they saw a wedding ring on Vettel’s finger in Canada. But, he did not wear that ring later on, during his visit to France, which caused pretty confusion in public.

Reportedly, Hanna Prater met the love of her life, Sebastian Vettel, at school in 2006. Since then, they gradually became close friends and eventually started dating after a while. In addition, as mentioned in Essentially Sports, the beautiful pair started living together in 2010.

So, it has been more than a decade since Prater and Vettel are together as a couple. The beautiful couple turned their childhood friendship into a strong marital bond and are still enjoying their togetherness with each other full of love, dedication, and care.

The years-long courtship of Hanna Prater and Sebastian Vettel has not just showered them with lots of love and support for each other. Along with that, they are blessed with three adorable kids, two daughters, and a son.

Hanna Prater’s first child with Sebastian Vettel is a daughter named Emilie Vettel or Emily Vettel who made them parents in January 2014. Similarly, Prater gave birth to her second child, daughter Matilda Vettel in September 2015. Their third child, whose name is still not available on the internet, joined their expanding family in November 2019.

Currently, the happy family of five, Hanna Prater, Sebastian Vettel, and their children reside in a medieval-style farmhouse in Thurgau, Switzerland. Vettel, who usually prefers to be called a father and a husband rather than an F1 driver, must be happy that he has a supportive wife and loving kids, who always freshens his mind after a long hectic day.

Sebastian Vettel’s wife, Hanna Prater, is a pretty secretive lady like her husband. However, some online sources still managed to dig out some information about her. According to sources, Prater was born in 1987, in Heppenheim, Germany, to a German father and a British mother.

Later, after completing her studies at a Fashion School, Prater got the opportunity to work in the print fashion industry. Gradually, she made a name for herself by styling for the prestigious ‘Look Magazine.’ Moreover, Prater also served at the S. Oliver Fashion House and gained some experience.

Furthermore, after moving on with Vettel and having kids with him, Hanna took a break from her career. And, it is still unknown if she continues to work in the fashion industry at the moment or not. Hopefully, either Vettel or Prater herself will soon talk about their lives shortly.

5 Interesting Facts About Sonya C, She Was Master P’s Wife

Who Is Nikita Mazepin’s Girlfriend? Look At The f1 Racer’s Love Life And Relationship