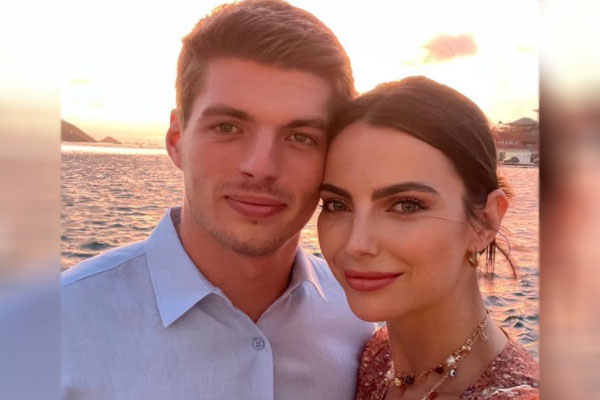 Max Verstappen and Kelly Piquet are very much in love with each other. Image Source: Max Verstappen's Instagram.

Max Verstappen and Kelly Piquet are not unfamiliar faces in the world of sports, especially auto racing. Verstappen is a well-known Belgian-Dutch racing driver competing in Formula One with Red Bull Racing at the moment. Similarly, Piquet is the daughter of Brazilian legend and the three-time F1 world champion, Nelson Piquet. Currently, she serves as a Motor Sports Professional Blogger, columnist, and model.

Reportedly Dating Each Other Since The End Of 2020

The 32-year old German-born model Kelly Piquet and the 23-year old F1 superstar Max Verstappen reportedly started dating each other at the end of 2020. However, the two confirmed their relationship only at the beginning of 2021.

The public found out about the duo’s romance when Verstappen took to his Instagram, wishing his over 5 million followers a happy new year 2021 and confirming his bond with Piquet in the same post. He shared a photo with Piquet along with the caption;

“Happy New Year everyone. Let’s make 2021 a year to remember in many ways. Wish you all success, love and happiness just as I found mine.”

The F1 driver officially confirmed that he was dating the Brazillian model and stated that he had found love and happiness. On top of that, Piquet also shared a snap with her love Verstappen on her own Instagram.

Ever since then, both Max Verstappen and Kelly Piquet have often shared pictures with one another on their respective social media pages. The couple never misses a chance to express their extreme love for each other publicly.

Similarly, after Max Verstappen became the World Champion in December 2021, Kelly took to her social media to congratulate her beau. She posted a series of pictures and videos on her Instagram exclaiming that her boyfriend was No. 1 in the world. Moreover, videos of the couple tearfully embracing and kissing after Max’s win circulated in the media.

We hope the beautiful pair’s affinity and care for one another get stronger with time, and their relationship does not fizzle out like their previous ones.

Before dating Kelly Piquet, Max Verstappen was reportedly seeing Dilara Sanlik. According to sources, the couple began going out with one another at the end of 2017. Though the former couple did not reveal much about their relationship, Sanlik was often spotted around the F1 paddock across race weekends.

However, after dating for almost three years, Max Verstappen broke up with Dilara Sanlik at the end of 2020. Kelly Piquet’s boyfriend came to the media disclosing that he no longer had a girlfriend and remained mute regarding why he separated from Sanlik.

Besides Dilara, Max Verstappen was also linked to many other beauties and fellow female racers during his early racing careers. For example, he was romantically linked with the Instagram models Roos Van Der Aa and Joyce Godefridi for a short period of time. Similarly, drivers Sabre Cook and Mikaela Ahlin-Kottulinsky were also Max Verstappen’s girlfriends for a while.

Like her present boyfriend, Max Verstappen, Kelly Piquet was also in a romantic relationship with another man in the past. She dated Russian racing driver Daniil Kvyat for three years, from January 2017 to December 2020. Kvyat is the same man whom Verstappen replaced in mid-2016 at Red Bull.

While Daniel Kvyat was still Kelly Piquet’s boyfriend, they welcomed a daughter named Penelope Kvyat together on 27 July 2019. Currently, their daughter, Penelope, mainly stays with her mom and occasionally visits her dad. Max also has a lovely bond with Penelope.

Moreover, it seems like we will get to see them tie the marital knot soon as both have introduced each other to their parents also and are close with them.

Hopefully, Max and Kelly’s relationship pass the test of time, and we get to see them together for years to come.