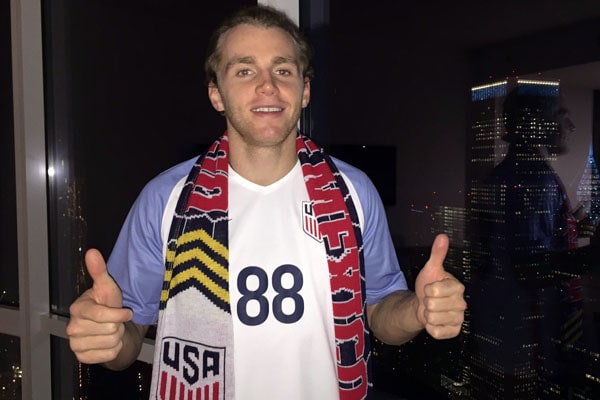 Patrick Kane has been in a romantic relationship with Amanda Grahovec since many years. Image Source: Patrick Kane's Twitter.

The professional ice hockey player Patrick Kane, who currently serves as the Chicago Blackhawks’ right-winger and alternate captain, is open about his professional life. However, not much is disclosed about his personal life, including his relationship.

Patrick Kane’s Girlfriend Since More Than A Decade

Amanda Grahovec has been the veteran ice hockey player Patrick Kane’s partner for more than a decade. Reportedly, the long-time pair has been together since early 2010. Grahovec was spotted together with her boyfriend, Patrick, in public for the first time in 2013 when Kane’s team won the Stanley Cup.

According to various online sources, Patrick Kane met the love of his life, Amanda Grahovec, in their mutual friend’s party in Dallas. At first, they befriended each other and started meeting often.

However, their friendship gradually grew into something big, and finally, they decided to take their relationship to the next level. So, both Kane and Grahovec began dating publicly in 2013.

Hence, Amanda Grahovec and Patrick Kane’s togetherness as a romantic couple has crossed over a decade, and they seem to be extremely happy with their relationship. But, still, the two have not exchanged their wedding vows yet. So, hopefully, we will get to hear news of their marriage soon.

A Mother To A Son With Patrick Kane

Though Amanda Grahovec has not walked down the aisle with her long-time lover yet, she has already welcomed a son with him. Patrick Kane’s girlfriend, Amanda, gave birth to their first child, Patrick Timothy Kane III, on 12 November 2020.

However, the proud dad, Patrick, announced his son’s birth date and name via a tweet only on his 32nd birthday, i.e., 19 November 2020.

Since becoming a daddy for the first time, Amanda Grahovec’s boyfriend, Patrick Kane, has admitted to experiencing growth and significant changes in himself. During a talk with NBC Sports, the Blackhawks champ said that fatherhood had been great fun for him so far. He added that returning home to his son and girlfriend after his morning training and skating makes him unbelievably happy.

Furthermore, both Amanda and Patrick let their child do what he wants to do. Once, they tried to put a hockey stick in little Patrick’s hand with the intention of getting him some hockey gear. However, he really did not have it too much.

So, the new parents thought that their son might not like hockey and decided to let him play whatever he wants.

Despite being a partner of a well-known sports personality, Patrick Kane’s girlfriend, Amanda Grahovec, prefers to stay far from the reach of excess media scrutiny. Besides accompanying her man in few events, Grahovec does not have any interest in the limelight. As a result, Amanda is not available on any of the social media handles.

Furthermore, due to the secretive nature of Amanda, her exact profession and family background is still a mystery to many. However, according to PlayersGF, her parents are Joseph Edward Grahovec and Linda Grahovec, who resides in Yorkville, Illinois.

Talking about her education, she is a graduate of Harrington College of Design with a BFA in Interior design. Hence, it’s speculated that Patrick Kane’s baby mama, Amanda, might be working as an interior designer at some private firms in Chicago, where she lives with her partner and their son.

Hopefully, we will get to know more about Tytyana Miller’s net worthKane’s partner, Amanda Grahovec, in the upcoming days.