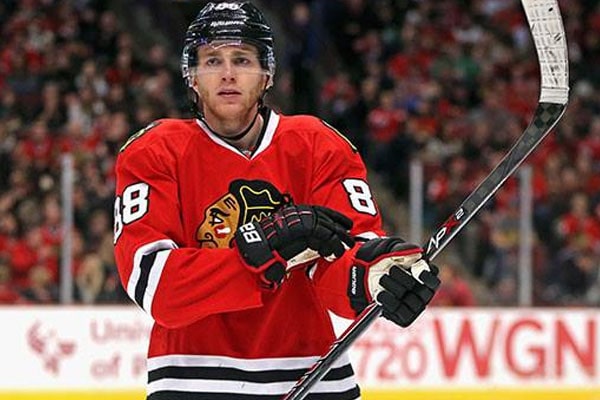 Patrick Kane is one of the successful American sports personalities, currently serving as an ice hockey right winger and alternate captain for the Chicago Blackhawks of NHL. He is one of those exceptional NHL players who have scored over 1000 points in the regular season. So, along with various championships and titles, the BlackHawk’s trusty right-wing is also winning the hearts of millions of hockey fans worldwide.

Kane’s admirers and those who usually keep track of his life are often curious about how much he earns as a professional hockey player. So, here, we will be especially tailing New York-born Patrick Kane’s net worth and his salary and contracts from his team.

Patrick Kane Net Worth And Earnings

Also called ‘Showtime’ by supporters, Patrick Kane has made millions from his successful career in the sports industry. Celebrity Net Worth and some other online sources claim that Patrick Kane’s net worth is currently estimated to be roughly $28 million.

The maximum percentage of the NHL star Patrick Kane’s total earnings comes from his career as a hockey player. And, some portion comes from his involvement in other business ventures. So, how does he manage to accumulate such a hefty amount to his total assets? Let’s take a peek at his income source.

During his initial days as a hockey player, Patrick Kane played junior hockey for different hockey teams earning numerous titles. However, he started playing professionally in NHL after Chicago Blackhawks drafted him to its team in 2007. Ever since then, he is regularly playing for the Blackhawks, winning various awards and accolades for his team and himself.

Ever since his debut in the NHL, Patrick Kane is reportedly receiving six figures or more in salary every year. His first three-year contract with the Blackhawks, which he signed in 2007, was worth $2,625,000.

Moreover, the average amounts Patrick Kane received as his salaries and signing bonuses from the Blackhawks all these years are mentioned below.

So, looking at Patrick Kane’s contracts and salaries worth millions, we can be assured that his net worth of $28 million mentioned in various sources is pretty justifiable.

Pocketing Some Dollars From Endorsement Deals

Besides, Kane has also appeared in several advertisements for Gatorade and McDonald’s. So, these companies might have paid him a good sum of money for advertising their products to millions of customers worldwide.

Honor Willie O’Ree and support the growth of diversity in our game!
My autographed @Bauerhockey Willie O’Ree skates are now up for auction with all proceeds supporting @blackgirlhockey. Visit https://t.co/k9orK7lzJR to place a bid! @NHL pic.twitter.com/mwFz82Kz7D

Moreover, like many other athletes, Patrick Kane might have also invested in big and small businesses to have long-lasting financial security. However, the businesses where he has poured his money are still a secret to the public.

ALSO READ: Brendan Fraser Net Worth And Earnings As An Actor

The multi-millionaire sportsperson Patrick Kane does not just use his money to enjoy a lavish life. He also utilizes his wealth and stardom in the service of humankind and other living beings.

In 2020, when the campaign against racism was on the rise in the United States, Patrick showed his solidarity through words and actions. In a lengthy Twitter thread, he explained that even though he won’t completely understand the outcomes of racism as a white male, he feels that racism must end for good.

Moreover, apart from his professional busyness, Patrick Kane often takes part in charity games. In 2016, he lent his hand in the Denis Savard Charity Golf Tournament. Kane also played in the Champs for Charity game in 2012. The event amassed $323K, which went to Ronald McDonald House of Chicagoland and Northwest Indiana.

Furthermore, Kane and his team participated in another charity ice hockey game to collect money for Special Olympics in 2018. Hundreds of spectators watched their game which helped them raise $50K.

The Chicago Blackhawk star Patrick Kane’s net worth of $28 million has provided him with all the luxuries that he deserves in his life. He lives in comfy and expensive apartments and houses and owns a wide range of spacious and comfortable cars. Moreover, Kane has enough money to give his partner Amanda Grahovec and son Patrick Timothy Kane III a rich life.

A year after claiming a spot in the 2007 NHL draft, Patrick treated himself with an extravagant condominium at the Trump International Hotel and Tower in River North. According to records, he paid $2.06 million for the 2,000-square-foot unit. But, later, Kane put the condo up for sale in 2016 with a price tag of $2.15 million.

Besides, Patrick Kane drives luxury cars, including a spacious Hummer H2, a Black Chevy Truck, and a white SUV. We hope he does not just ride them but also pays their insurance premiums and taxes in time.

Looking at the millions of dollars he receives as a professional player, it is no surprise that Patrick Kane enjoys a lavish lifestyle. We hope the Chicago Blackhawks player continues to make a decent sum every year and even win a few more trophies in the upcoming seasons.