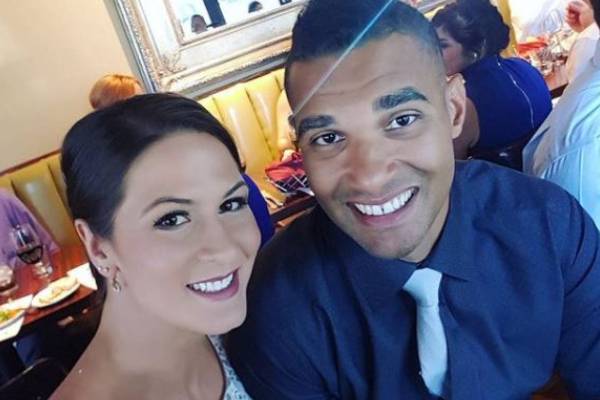 Adelina Gray and Damaris Sanders have been together for a long time now. Image Source: Adeline Gray Instagram.

Adeline Gray, aka Adeline Maria Gray, is a wrestler from America, famous for being a five-time world champion. Furthermore, she is also recognized as the first U.S. woman to gain victory in back-to-back wrestling World titles and also the first American wrestler to acclaim 5 World titles.

Adeline’s fans and supporters are curious to know who is the lucky man to whom a successful wrestler like her has been married. So, here is some information about Adeline Gray’s husband and his whereabouts.

Have Been Together For A Long Time

The popular American wrestler Adeline Gray shares a blissful marital life with her long-time partner, Damaris Sanders. The adorable couple met for the first time in 2013 in Colorado when she was training in Colorado Springs, and he was at Fort Carson.

Shortly after that, they began dating each other, and in September 2016, Damaris proposed to Adeline, and she said, “Yes!” Furthermore, she revealed the news about her engagement via an Instagram post, to which she captioned saying she was getting married.

Then, a year later, on July 4, 2017, the lovely pair of Damaris and Adeline walked down the aisle in a wedding ceremony attended by their friends and family in Denver, Colorado. The couple shared beautiful pictures of their weddings as well.

Is The Captain Of the U.S. Army

Adeline Gray’s husband, Damaris, is the captain of the U.S. Army. In April 2017, he graduated from Ranger. He is stationed at Fort Polk, Louisiana.

Similarly, Damaris Sanders’s wife uploads several posts of him in army dress and states her respect for the U.S. army.

People Ask Him If He Can Wrestle His Wife

Similarly, people also ask if he wrestles his wife, to which he answers, saying he does not.

In the interview, Damaris also said that he is her hype man and always tells her that she’s the heavyweight champion of the world. He even roams around with the belt. He added that he once wore the belt to work and said that they had won the title.

Their Marriage Is One Of The Examples Of Interracial Marriage

Adeline Gray and Damaris Sanders’s marriage is one of the many examples of interracial marriages. In one of the interviews in 2021, she talked about her relationship and marriage. She mentioned that she had some rocky moments with her husband in 2020.

She mentioned that although he is supportive in her career, they had to deal with their emotional issues of being a mixed-race couple. Gray talked about some very uncomfortable discussions that she had in her own household, as she was married to a Black man, and her dad is a police officer.

Damaris’s partner has also talked about this on her Instagram. Despite the bumpy roads in their relationship, they are gracefully handling their marital life.

Is Supportive Of His Wife

As mentioned above, Adeline’s hubby, Damaris, has talked about being her hype man in one of the interviews.

Just like him, Damaris Sanders’s wife, Adeline, is also the biggest supporter of him. They both are deeply in love with each other, and because of this immense love and support, the couple’s marriage is going strong.

Talking about kids, Damaris’s wife talked about her eagerness to embrace motherhood. She mentioned that she couldn’t wait to become a mom someday. Nonetheless, Damaris and his wife surely will become great parents to their children.