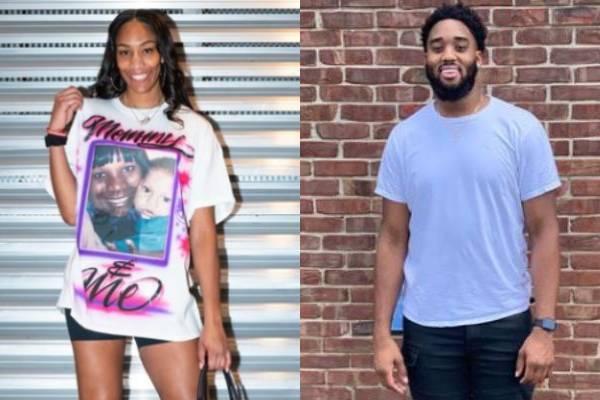 A'ja Wilson and Josh Cunningham met back when they were in high school. Image Source: A'ja Wilson Instagram.

A’ja Wilson and Josh Cunningham are both professional basketball players. Both of them are well-accomplished and one of the most famous athletes. A’ja currently plays for a WNBA team, Las Vegas Aces, which she joined in 2018. At the same time, Josh plays for KK Borac Bonja Luka, a European Club. Before that, he played for Southland Sharks.

After the young athletes started dating, their relationship made a big headline. However, their approach of keeping things away from the public eye has made their fans wonder if they are still dating or not. Thus, in today’s article, let’s find out if the love birds are still together or not, including how it began for them.

In an interview, A’ja revealed that she reached out to her now-boyfriend not only to consider the school but to know more about him. Furthermore, the WNBA player admitted that her lover is a man of few words, which created some awkward moments.

Although they joined different colleges, the duo kept in touch with each other. They exchanged messages occasionally and realized that they have a lot in common. Apparently, their birthdays are in the same months. A’ja’s is on August 8, while Josh’s is on August 11. Finally, in 2018, the love birds started dating and have been together ever since.

Doing Great In Their Professional Lives

Both A’ja and her lover are doing well in their career. In addition, the duo earns a lot of money. As an active athlete, the Dayton university graduate seems to have earned a hefty sum in his career. As reported by Scottfujita, the average salary of European basketball players ranges from $500K to $800K per season. However, the pay highly depends on the athlete’s skills. So, Aja Wilson’s boyfriend must be earning within the stated range. As a result, Josh Cunningham’s net worth must be a significant sum.

Furthermore, the loving boyfriend also promotes several clothing brands on his Instagram account. Thus, his earnings must also benefit from those endorsement deals. In addition, A’ja Wilson’s beau also has a YouTube channel which he runs with his friend, Jermaine D Morgan. But they have not uploaded any video since January 2021.

On the other hand, Spotrac reported that the South Carolina graduate signed 2 years of contract worth $398,422 with the Las Vegas Aces. In 2022, Josh Cunningham’s girlfriend is expected to earn an average of $196,267 while carrying a cap hit of $196,267. Even during her rookie contract, she had an average pay of $58,045 per season. Now, with her new deal, her fortune is bound to increase drastically.

Likewise, the Las Vegas Ace player has a huge fan following on her social media. Owing to her fame, she has inked a lucrative endorsement deal with Mountain Dew. The deals will certainly benefit A’ja Wilson’s earnings. Considering their endeavors and earnings, there is no doubt that the pair are living comfortable lives.

Are The Duo Still Dating?

YES, A’ja Wilson and Josh Cunningham are still happily together. Although both are very busy with their careers, they share a strong bond. However, the couple prefers to keep their relationship details to themselves. As a result, the duo has not posted any pictures together on their social media accounts. Both of them are active on Instagram and regularly update only about their professional life.

Regardless, the adorable pair seems to be doing great in their relationship. Josh Cunningham’s girlfriend once mentioned that they survive long-distance relationships by Face Timing and texting a lot. So, the love birds must be enjoying quality time apart from the unnecessary attention of the public. Nonetheless, we wish the couple a lasting bond.