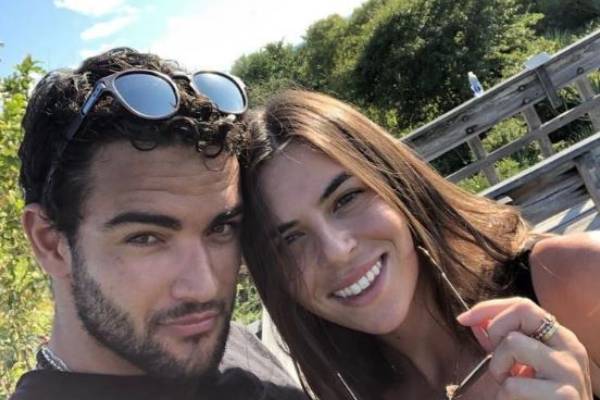 Anyone keeping track of tennis might have heard the name, Matteo Berrettini. If you don’t know who he is, then he is a professional tennis player from Italy who has competed in both singles and doubles events. Matteo has established himself as one of the successful tennis players of his time.

Matteo often keeps his fans up to date with his professional career records, but apart from that, his followers have shown interest to know about his personal life. Well, the athlete is currently dating fellow tennis player Ajla Tomljanovic. Many might be curious to know how did it start for the couple.

So, let’s find out all the details about Matteo Berrettini and Ajla Tomljanovic’s relationship in this article.

As mentioned earlier, the popular tennis player Matteo is in a happy relationship with Ajla Tomljanovic. Matteo Berrettini’s girlfriend is a Croatian-Australian professional tennis player. In her playing career, she has achieved numerous victories on different matches and has also earned different titles.

In October 2008, Ajla made her professional debut at the ITF Circuit event in Mexico City. She used to play for her birth country Croatia until she began competing for Australia after receiving permanent residency in 2014. The first time she played for Australia was at the 2014 US Open.

However, she still had to represent Croatia at non-Grand Slam tournaments until she gained full Australian citizenship in January 2018. She is yet to win the Grand Slam Singles title but has reached the second round in the Australian Open four times, the third round in the 2021 US Open, and the fourth round in the 2014 French Open.

Ajla gained full Australian citizenship in January 2018 and began representing Australia on WTA Tour. In 2018, she reached the quarterfinals of a Grand Slam championship at Wimbledon for the first time in her career.

Nevertheless, Matteo Berrettini’s partner seems to be doing well in her tennis career. Let’s hope she gains victories in different events and finds more success in the coming days.

Tennis Might Be The Reason Why They Got Together

Matteo and Ajla have been dating for a few years now. The couple does not hesitate to share adorable pictures on their respective Instagram. However, it is unknown when and how the duo met.

As Ajla and Matteo are tennis players, tennis might be why they got together. Moreover, the lovebirds have remained tight-lipped about when they started their relationship. So, it seems like it might be a while before we get to know the details about Matteo Berrettini and Ajla Tomljanovic’s relationship.

Well, fans linked the couple for the first time when they spotted Ajla in the box of Matteo during the 2019 US Open. Before that, an Instagram post of the duo visiting an Italian restaurant in New York also raised the eyebrows of many.

In October 2019, Ajla Tomljanovic’s boyfriend, Matteo, posted a picture of them together for the first time. The duo was walking around and shopping in Vienna, Austria. Since then, they have frequently shared photos of one another.

Moreover, the pair were living together during the COVID-19 pandemic with Ajla’s family. Matteo and Ajla seem to be deeply in love with each other. They are yet to get married but let’s hope we hear some good news real soon.

The Couple Prefer To Play At The Same Time

As mentioned earlier, Matteo and Ajla have been dating each other for a few years. Now that the couple has made their relationship official, they are also seen supporting their partners at each others’ matches.

In an interview, Ajla Tomljanovic’s beau revealed that he likes it when they are playing at the same time because he feels ten times more stressed while watching her match. Ajla also added that it’s better to play at the same time as it takes away the stress that she has when watching from the locker room.

Not only that, but Matteo also becomes nervous when he cannot see her scores and imagines worst-case scenarios. His girlfriend revealed that whenever she finishes, and he’s in the third set, she won’t go there, maybe due to superstition.

It is clear that the couple supports each other in their respective careers. We hope to see the pair clinching Grand Slam titles in the upcoming days.

While Matteo Berrettini and Ajla Tomljanovic’s relationship is the talk of the town now, it is not the first time that she has dated a tennis player. Before getting into a relationship with Matteo, Ajla was dating her fellow Aussie Nick Kyrgios. The former boyfriend and girlfriend had begun their relationship in 2017.

However, the duo dated for less than a year and broke up. It has been reported that Ajla and Nick’s relationship broke off after he was spotted partying with a couple of girls.

It must have been hard for Ajla to go through the heartbreak. But she has already moved on in her life with Matteo. On the other hand, there is no information about Matteo’s previous relationship.