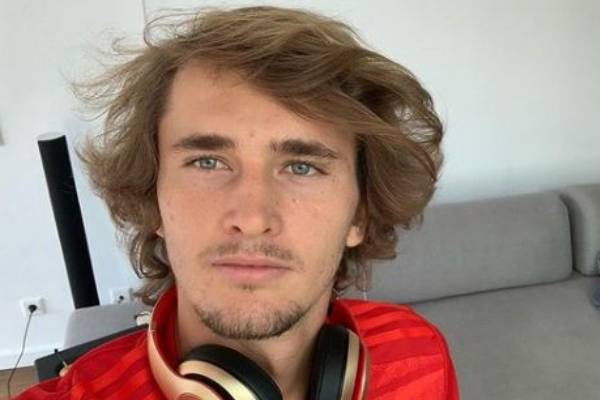 Alexander Zverev is a professional tennis player of German nationality. He has gained immense fame by getting ranked as high as No.3 in the world by the Association of Tennis Professionals. The fame and recognition have helped him gain a huge fanbase around the world.

Anyone who follows the tennis sport knows that Zverev is a doting father of a child. However, many are curious about who his partner is and about his love life.

So, who is Alexander Zverev’s wife? Also, find out about his tumultuous love life.

Welcomed A Daughter With His Ex-Girlfriend

As mentioned earlier, Alexander Zverev is a father of a daughter. He and his ex-girlfriend, Brenda Patea, welcomed their baby girl, Mayla, on March 11, 2021. Brenda shared the news of the arrival of their little one via her Instagram.

Brenda had revealed the news of her pregnancy in an interview with Bild, saying she was 20 weeks pregnant and was expecting a baby with Alexander. Their romance had blossomed after Alex approached the model in a Paris coffee shop in October 2019.

While many fans were expecting Brenda Patea to be Alexander Zverev’s wife, the pair ended their relationship in August 2020. And although Alex had talked about co-parenting in the media, his baby mama, stated in an interview that she wouldn’t share custody with him. Patea also mentioned that she did not have any communication with the tennis star.

Furthermore, Brenda also explained why the former couple was not together. She stated that they had crises before and ended their relationship.

However, in August 2021, the estranged duo was seen spending quality time with their daughter. Brenda also shared videos of the fun times between the loving parents and their daughter. The couple might have come to a mutual understanding regarding their little one and are probably raising her together.

Before dating Brenda, the handsome tennis player, Alexander was in a relationship with Olya Sharypova aka Olga Sharypova. The couple was childhood friends and they began dating on September 5, 2018. While talking to Slate in August 2021, Alexander Zverev’s ex-girlfriend, Olga Sharypova, accused him of domestic violence. She mentioned that over the course of their 13-month relationship,  he allegedly punched, hit, and strangled her.

Olya added that he even controlled what she did and who she saw. Furthermore, she accused him of telling her that she should have died. Sharypova also provided photos of bruising, text messages, and witness testimony in support of her allegations.

However, even after the allegations, the ATP did not do anything to address them. Instead, the tennis association promoted him on its social media accounts, stating that those allegations were none of their business.

Furthermore, Alexander has denied the claims and has launched legal action. The court granted him a preliminary injunction in Germany against the publisher and author of the allegations.

In addition, Alexander was involved in a controversy when he made a joke about not having a girlfriend while facing such serious allegations. Many people tweeted against him and called him out. However, Zverev has not spoken much about it.

Who Is Alexander Zverev’s Wife?

After his two unsuccessful relationships, it is not known if the player is single or married. He has only posted about his professional life on his social media and has not revealed anything about his personal life. Moreover, with his ill-timed joke about not having a girlfriend, one can assume that he has not dated anyone in recent days.

Thus, we might have to wait for quite some time to meet Alexander Zverev’s wife. And whoever that might be, we hope the doting father of one does not hesitate to introduce her to his fans.

Thus, it seems like Alexander is single and might be fully dedicated to his sports and raising his daughter, Mayla with his ex-girlfriend. We hope that he finds someone in the future and enjoys a happy life.