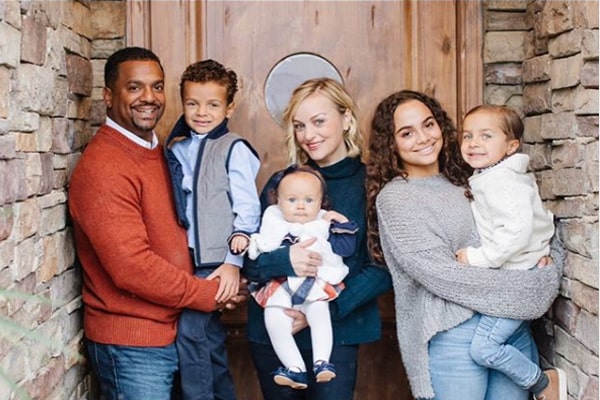 Angela Riberio is a beautiful woman with big heart and eternal love for her husband and family. Image Source" Angela Riberio's family

An American actor, comedian, television personality, and what not, Mr. Alfonso Ribeiro is known for his role as Maxwell Stanton on In the House. He has made a massive name in the entertainment industry since his debut in 1980. Alfonso is, without a doubt, versed in what he does on-screen; however, he is equally successful as a father and a husband off-screen as well.

Alfonso Ribeiro’s wife, Angela Unkrich, has been married to the witty guy since 2012 and are still together with lots of love for one another. Let’s find out who Angela is and what she does besides being Ribeiro’s partner.

Alfonso Ribeiro’s spouse, Angele Unkrich, is a fun person to hang out with. It has been quite some time since he introduced Unkrich to the world and she hasn’t disappointed at all. According to Angela Unkrich’s Twitter bio, she is a wife, mother, travel enthusiast, Basketball, and Golf lover. Moreover, she is an accomplished blog writer.

Her Instagram leads to her blog, My Mommyhood Tales, where she shares about her pregnancy, products, parenting, and many more. Alfonso Ribeiro’s wife, Angela Unkrich was born to Stanley Unkrich and Valerie Sue Unkrich in Swedesburg, Iowa, United States. Likewise, she grew up alongside her siblings, Brendan Unkrich, Tyson Unkrich.

Furthermore, she graduated from Northwestern University with a degree in communication. She was super-active and was involved in basketball, softball, gymnastics, etc. When she moved to LA, she worked many jobs including screenwriter’s assistant, diving coach, etc. Aforementioned, Alfonso Ribeiro’s beau is an avid traveler and seems to have traveled a handful of places including Bali, Israel, NZ, Bahamas, India, LU, Monaco, Belgium, & Qatar. According to her blog, she had traveled over 85 countries.

#tbt Some of my #handstands from around the world…Bali, Israel, NZ, Bahamas, India, LU, Monaco, Belgium, & Qatar. pic.twitter.com/oqP3j5pnKK

The beautiful petite woman with blue eyes seem to be very generous and supportive of her husband and is very passionate about her writings. Furthermore, Angela has also appeared in I’m a Celebrity, Get Me Out of Here! alongside her husband in 2013. Likewise, Ribeiro’s IMDb also reveals that she has made her appearance in House Wife as well.

Although Angela Unkrich rose to fame as Alfonso Ribeiro’s wife, she is a very talented and self-sustained woman, not to mention a lovely housewife and a nurturing mother of three.

Emotions are more robust than we think it is. When you come to understand the nature of a person and look past their mistakes, we get to know what great person s/he is. That is the story of this beautiful couple, Angela Unkrich Ribeiro and Alfonso Ribeiro.

In an interview, the couple revealed that they met at National Game Championship at Four Season Hotel, where their familiar friends would watch the game together. Alfonso Ribeiro’s wife also told that she had heard that Alfonso was a director, and she was determined not to date anyone in the entertainment industry.

However, the couple did catch up on each other and had something special. Unkrich’s husband added that he knew that she was the one, but he was going through a divorce. Although it was going to be Angela’s first marriage, she managed to look past that, and everything was smooth.

The Fresh Prince of Bel-Air star Alfonso proposed Angela Unkrich on a yacht in Lake Tahoe in 2012. The proposal happened during Mr. Ribeiro’s golf tournament, and therefore, Angela explains that she was not expecting that at all.

After two months of being engaged and a year-long dating, the couple finally decided to walk down the aisle. The intimate ceremony took place in Burbank, California, joined by Joey Fatone, Ricky Schroder, and his daughter, Sienna Ribeiro.

Michael Russo planned the beautiful wedding, and the couple shared their vows in front of 175 family and friends under a beautiful sky. The couple further announced their commitment and excitement via Twitter. Known as Will Smith‘s uptight cousin on famous series The Fresh Prince of Bel-Air, Alfonso tweeted, “Last night I got married to the most incredible woman in the world.”

Likewise, Ribeiro’s wife also tweeted, “1st morning, waking up as Mrs. Ribeiro = AMAZING!!! So happy and blessed!” The couple looks incredibly happy together and has been in love ever since. It has been almost eight years, Alfonso introduced his jolly wife to the world, and nothing seems to have changed as they glow with love.

Likewise, Alfonso often flaunts his beautiful woman on his Instagram with cute captions even after being together for so long. They have nothing but love and a lovely family to adore.

Changes And Expansion Of Family

Alfonso Ribeiro and Angela Ribeiro were ready to welcome a new member of the family within a year of their marriage. The couple welcomed their first son, Alfonso Lincoln Ribeiro, Jr., on October 27, 2013, in Los Angeles. The winner of Dancing with the Star, season 15, tweeted the good news thanking Dr. Jason Rothbart.

Likewise, they welcomed their second son Anders Reyn Ribeiro on April 30, 2015, in LA at 6:16 a.m. Furthermore, Alfonso announced the birth of his second child during an episode of Dancing With the Stars.

Similarly, Alfonso Ribeiro’s wife, Angela, gave birth to their third child, Ava Sue Ribeiro on May 13, 2019. The couple had announced their pregnancy via Instagram post, with a hashtag #babyontheway.

Besides being the biological mother of three, Alfonso Ribeiro’s partner, Angela Ribeiro, is also a loving step-mother of Sienna Ribeiro. She is Alfonso’s daughter from a previous marriage with Robin Stapler.

Angela Unkrich is a wonderful lady with beautiful ocean eyes, a big heart, and a warm smile. She is a dedicated housewife and manages to support her family in any manner. Let’s hope the Ribeiro family enjoys their family and continues to prosper indefinitely.