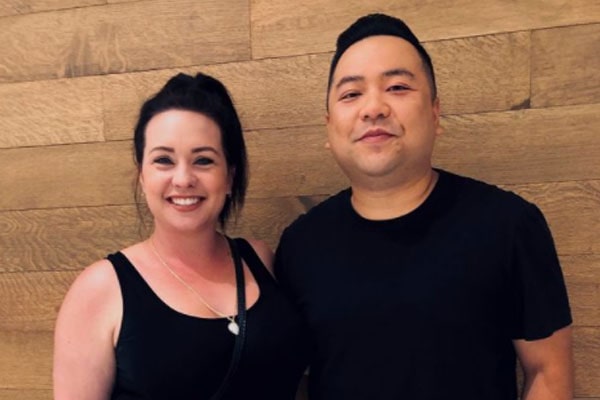 Andrew Phung is a famous Calgary native actor, improviser, and comedian with full of energy. Currently, Phung portrays the role of Kimchee on the CBC’s TV sitcom Kim’s Convenience. Phung has won numerous Canadian awards for the character, including the 2020 Best Supporting Actor in a Comedy category. Other comedy shows and films in which Andrew appeared include Cowtown, Drafted, and many more. He is also the co-founder of an online sneaker group, YYCSolediers. Moreover, the young and handsome hunk, Andrew Phung, is an active participant of a non-profit organization, Youth Central.

One of Calgary’s best local comedians, Andrew Phung, is in a marital relationship with gorgeous beauty Tamara Sharpe. Here, without any delay, get to learn some more about Andrew Phung’s wife, Tamara Sharpe, and their children together.

Married To Andrew Phung Since 2013

Andrew Phung took the wedding vows with his long time girlfriend, Tamara Sharpe, on 1 June 2013. The exact venue and attendees of Andrew Phung and Tamara Sharpe’s marriage ceremony is not available on the internet. However, kudos to Andrew Phung that he opened up some fragments of his relationship with Tamara via an Instagram post.

As mentioned by Andrew, 1 June is the luckiest date for him as it is the day he went for a first date with his future wife, Tamara Sharpe. They met in the Outlaws Nightclub and fell for each other. The adorable couple dated for almost seven years until Phung popped up the question with a diamond embedded ring in 2012. And, without any delay, Tamara said ‘Yes.’

It’s been over fifteen years since the husband-wife duo, Tamara and Andrew are together. However, they are still so much in love with one another, which can be seen clearly on their social media posts. As often mentioned by Andrew on his social media posts, his wife, Tamara, is not only a best friend and a dedicated wife for him but also his best board game partner and has the best and biggest laugh in the world. Moreover, Andrew Phung’s wife is very good at hanging picture frames and a good interior decorator. According to Andrew, she is quite good at driving, mainly if she has google maps with her. In short, Tamara is a perfect match for Andrew Phung, and he feels the luckiest to have her in his life.

Furthermore, Andrew Phung’s partner, Tamara, is also not less in expressing her immense love for her husband in social networking handles. She often flaunts her love and gratitude for her better half via social media posts. As mentioned on her Instagram bio, she is so much obsessed with her husband and feels lucky to have Andrew as a life partner.

More than fifteen years of togetherness of Andrew and his wife, Tamara, have blessed them with adorable sons, Nico Phung and Mateo Phung. The husband-wife duo, Phung and Sharpe, welcomed their eldest son, Nico, in 2014 while the youngest, Mateo, in 2017. Nico graduated from Kindergarten in 2020 and is currently enrolled in Grade-1. Talking about another son of Andrew Phung, Mateo, he is enjoying his toddler years at the moment.

Andrew and his beloved wife, Tamara, never hesitate to share pictures with their cheerful sons, Nico and Mateo. The proud parents of two frequently take their little ones for adventures to various places around the country. Going through the Instagram and Twitter page of Andrew and Tamara, it seems like both of Andrew Phung’s sons have good manners and are creative as well. They love doing kids activities together with their parents like painting, building a snowman during snowfall, singing, and visiting the farm.

According to the Calgary Herald, the talented actor, Andrew Phung’s wife, works as a Kindergarten teacher. The graduate of St. Mary’s High School Calgary, Tamara Sharpe’s exact workplace’s name is a mystery. However, it’s speculated that being a resident of Toronto, Ontario, Sharpe might teach Kindergarteners of the nearest Kindergarten School.

Though Tamara Sharpe’s profession is out shadowed by her husband, Andrew’s fame at the moment, we hope soon she will also come to prominence like him. Who knows, one day, she might also shine out like many other teachers turned celebrities like J.K. Rowling, Robert Frost, and Sylvester Stallone. Nevertheless, for now, she seems to be enjoying a happy and contented life with her husband, Andrew Phung, and sons, Nico and Mateo.