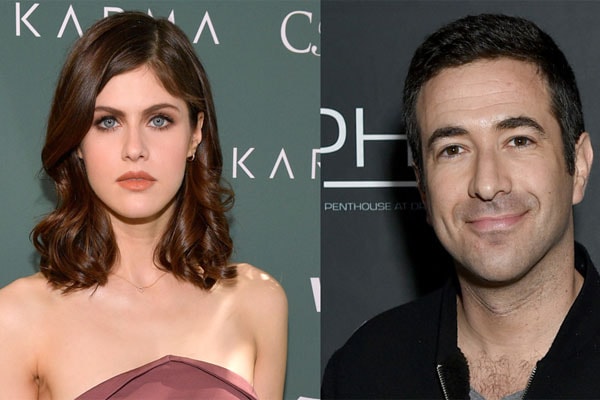 Ari Melber is an undeniably a renowned person that there isn’t a doubt how everyone enjoys watching his shows. Besides his professional life, his personal life is also worthwhile to keep us quite interesting. Ari Melber is currently dating Baywatch actress, Alexandra Daddario. If you wonder if he is a bachelor, well, he isn’t. He has an ex-wife named Drew Grant whom he divorced in 2017. The former couple shared no kids.

The Emmy Award winner, Amerian Journalist, Ari Melber is doing a great job hosting The Beat show that comes on weekdays at 6 pm on MNSBC. The show aired from July 24, 2017, which gained millions of viewers and fans. We don’t know how much you know about him, but Ari is a huge fan of Hip-Hop; hence, he mostly uses hip-hop terms while delivering the news. He is also a writer and attorney who appear to be one of the talented people in his field.

Ari Melber And Alexandra Daddario Are In A Relationship

Well, no one might have perceived that the two persons having different personality could end up meeting together. While considering Alexandra’s parents, both being a lawyer, it makes quite a sense that how she got interested in Ari Melber. The two lovebirds first came into limelight with comedian Richard Lewis while celebrating his 24 years of sobriety.

Since then, the couple officially started dating in public as they were often spotted going out for lunch. Ari and Alexandra were once spotted getting lunch together at a Cuban restaurant called Cafe Habana Malibu. Under the media coverage, it was reported that Ari leaned on to kiss Alexandra in the car. It shows that they are going strong. So far, they have tried to maintain their private life as low-key as possible.

We don’t want to spoil your mood but Melber’s current girlfriend, Alexandra Daddario has a history of dating her co-stars. She had dated actor Jason Fuchs for about three years in the past. She was even engaged to Percy Jackson costar Logan Lerman. And  Alexandra was rumored to be in a relationship with Zac Effron and Trey Songz.

Regarding Ari Melber’s past relationships, as mentioned above, he had been with Drew Grant since 2013 until they split in 2017. Ari’s ex-wife, Drew is also a journalist, currently working as the editor of The New York Observer. Even though the couple hadn’t been specific about their separation, according to what occurred between them, probably there must be a troubled relationship.

Well, everyone seems to have exes, so, it isn’t a big deal. It looks like the 33-year-old, Alexandra is having a great time with her boyfriend, Ari Melber. We hope they last long.