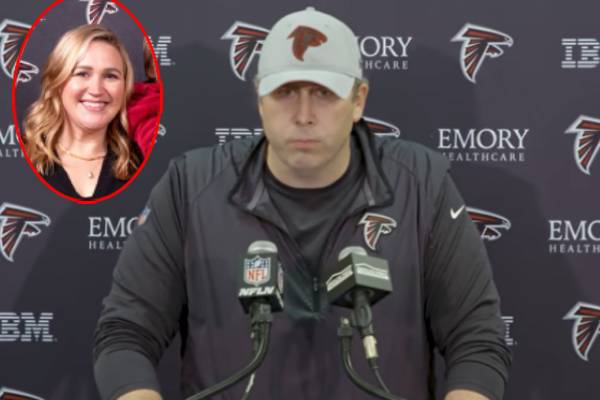 Arthur William Smith, aka Arthur Smith, is an American football coach who currently serves as the head coach of the Atlanta Falcons in the National Football League. Prior to becoming the Falcon head coach in 2021, Smith worked as an offensive coordinator for Tennessee Titans. Moreover, he attended Georgetown Preparatory School, where he was a member of the offensive line and served as team captain.

The NFL personality also saw some live action at defensive tackle and took part in track, lacrosse, and basketball at school. As his coaching career progressed, he got more well-renowned, and his fans are intrigued about his personal life. Well, he and Allison Smith are happily married. So, let’s take a closer look at Arthur Smith’s wife and their relationship.

As previously stated, Arthur is wedded to Allison Smith and lives a happy and contented life with her in Nashville, Tennessee. However, it is unknown when the duo tied the knot. The couple has kept their relationship details so private that not many know about their marriage. Still, they’ve probably been married for a long time now.

In addition, Arthur and his wife have remained silent about how they met and how their relationship developed. Similarly, there is not much information regarding their dating history, including how long they dated before getting married.

Regardless, the happily married couple must be having a wonderful time together.

Allison Is A Mother Of Three

After tying the knot, Arthur and Allison have been blessed with three kids, Tanner Smith, Sophie Smith, and William Smith. The couple’s first child, Tanner, was born on March 10, 2015. Then, after a few years, Arthur Smith’s daughter, Sophie Smith, arrived.

Eventually, Allison Smith’s youngest son, William, was born in October 2019. He came four and a half weeks ahead of the expected date and was put in NICU for some days.

The head coach’s children have been kept hidden from the public eye. Still, the kids often attend their dad’s team’s matches to cheer for them. Likewise, who knows, Arthur’s sons and daughter might follow in his footsteps in the coming days.

Fortunately, the Smith family is content with their lives and are now enjoying their time.

Supportive Of Her Husband’s Career

Arthur Smith’s wife, Allison Smith, has also been his biggest support system. She has posted many pictures on her Twitter account supporting her husband’s team. For instance, she uploaded a photo of her and her son watching Falcon’s match with the caption #titanup.

In addition, Allison and the children visited Arthur after his first conference during his first day at Atlanta Falcons Headquarters to support him.

Despite the fact that Arthur’s wife tries to keep herself out of the spotlight, she can’t stop herself from including herself in the crowd.

Arthur has gained significant popularity in his coaching career. With his outstanding coaching abilities, his fame has expanded globally. In addition, his family has also come into the spotlight following his media exposure.

Allison has also gained recognition because of her husband’s popularity. Still, she is a private person who prefers to lead a low-key profile. In addition, the blonde beauty uses her social networking platforms to cheer for her husband rather than reveal her affairs. As a result, it has gotten more difficult to know about her career interests and other things.

Regardless, Arthur Smith’s wife must be doing well and leading a pleasant life away from the media limelight. So let’s hope she will feel comfortable enough in public to talk about her personal life in the coming days.