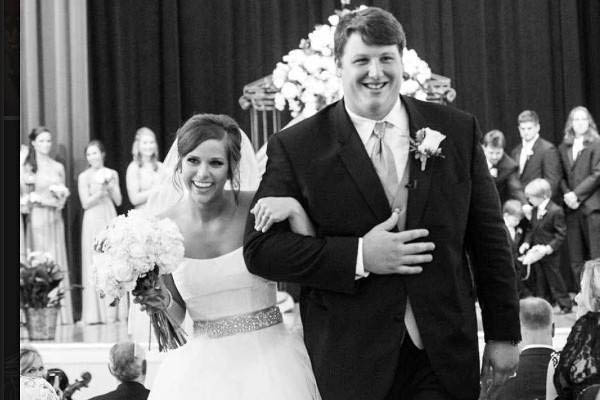 Ben Jones, born Benjamin Jones, is a well-known American football offensive lineman signed to the NFL’s Tennessee Titans since 2016. The former college football player for Georgia Bulldogs, Jones also played for the Houston Texans after being drafted in the fourth round of the 2012 NFL Draft. The Sports Illustrated magazine had ranked him the second among center prospects after former guard Peter Konz.

Like many other sports personalities, the football center Ben Jones is also mute regarding his personal life. He rarely opens up about his family and other personal details in the media interviews. However, it is not hidden to his fans that he is a married man. Jones is in a marital relationship with Alex Hilton. So, here, get to be familiar with some unrevealed facts about the Titan’s player, Ben Jones’ wife, Alex Hilton.

The famous sports personality Ben Jones exchanged wedding vows with his long-time girlfriend, Alex Hilton, on 31 May 2014. But, just two days after their wedding, Jones went back to his then-team, Houston Texans, for practice. During an interview with Texans Radio, Jones said that for both him and his girlfriend turned wife, Alex, football comes first. He added they would only go on their honeymoon once his game was over.

Ben Jones’ wife, Alex Hilton, met him in Georgia while both were in college and are together ever since. Their first dance while dating was to Brian McKnight’s ‘Back at One.’ The pairs’ first dance at their wedding was also to the same song.

The beautiful couple, Ben Jones and his wife, Alex, got engaged in 2013. While talking to the media, Jones said that after Alex entered his life as his love, he found life truly exciting and rewarding. It has been more than six years since the couple tied the knot; there seem to be no issues in their marital life. Instead, their love for one another is increasing with each passing day.

Runs A Charitable Foundation With Her Husband

Everyone who is well-informed about the offensive lineman’s life knows well that he runs a charitable organization named The Jones Mission. His childhood adversity planted a seed of a strong passion for helping children in need. He wanted to show kids experiencing hardship that anything is possible through hard work, determination, and prayer. So, he with his wife, Alex Hilton, founded The Jones Mission in 2017 at the Community Foundation of Middle Tennessee.

Ben Jones’ wife, Alex Hilton Jones, actively participates in philanthropic activities conducted by their foundation. Alex, her husband, and their foundation regularly organize various programs to continue their humanitarian works. Their family and friends must be proud of them as their foundation has greatly impacted the lives of homeless and poor kids in Nashville and Alabama.

Is Alex Hilton Engaged In Any Profession?

When Alex Hilton met her future husband, Ben Jones, she used to work in the sports information office. However, after moving in with Jones, she left her previous job. Since after marrying Jones, Alex seems to be giving her full-time to their non-profit organization. Besides that, other professions in which she is engaged in the present are still a mystery.

Furthermore, Ben Jones’ wife, Alex Hilton, is available on social media pages. But sadly, she does not post much about her personal and professional life on them. So, her life is entirely away from the public eye.

Nevertheless, her famous husband, Ben Jones, has currently resigned a contract with Titans worth $13 500 000. So, she might be living a luxurious life with her millionaire husband at their Alabama home.