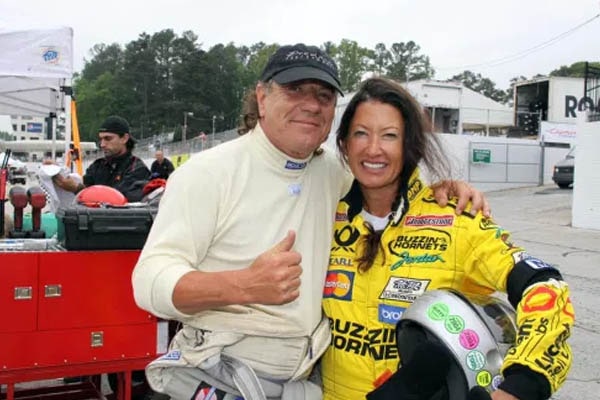 Brian Johnson is a famous name in the music industry. Johnson is best recognized as the lead singer of the Australian hard rock band AC/DC, who joined the group after the death of its former singer, Bon Scott. He worked as AC/DC frontman for over three decades. Besides, Johnson is also the founder of the British glam rock band ‘Geordie,’ which spawned many hit singles in the 1970s. Some of the albums in which Brian Johnson worked as AC/DC’s lead singer are Back in Black, Flick of the Switch, Blow Up Your Video, and many more. However, Johnson left AC/DC in 2016 due to hearing problems. But later, he rejoined the band to record its 2020 album, Power Up.

Brenda Johnson is the second wife of the AC/DC lead singer, Brian Johnson. Before Brenda, Brian Johnson exchanged the wedding vows with Carol Johnson in 1968. But they divorced two decades later in 1990 while Brian was about to release his 12th studio album with AC/DC band, The Razors Edge. Brian married Brenda some years later after dating her for a while.

Though Brian Johnson’s first marriage did not survive the test of time, he is committed to his current wife. Brenda often accompanies her husband on various red carpet events and music tours with his band. She enjoys having fun, going for outings, and partying with her better-half, Brian Johnson, and his bandmates. We hope Brian Johnson and Brenda Johnson’s love for one another remain strong like it is now for eternity.

Both Brian Johnson and his beloved wife, Brenda Johnson, are very secretive about their personal life. Apart from the occasional clicks by the media on events, they prefer not to share their photos together on their own. Consequently, there are no snaps of Brian Johnson’s wife, Brenda Johnson, with her step-kids. However, we hope she shares a great bonding with them behind the camera.

Brian Johnson’s wife, Brenda Johnson, is also a part of the music industry like her celebrity husband. Though she does not seem to possess singing skills like her spouse, she is a talented and experienced band manager. Brenda has managed numerous popular rock bands to date. She has experience working for bands such as Hangman Jury, 7 years Past, and many more.

Before the American rock band Hangman Jury came into existence, it was known by the name Bad Sara and was not as famous as it is now. So, they decided to take help from Brian Johnson’s spouse, Brenda Johnson, who accepted to be its manager. After Brenda took the responsibility of the band’s manager, it became known as Hangman Jury. However, it is not available for the public if she still manages the band or not.

Besides being a band manager, beautiful Brenda Johnson is also an ambassador of a couple of organizations, including the Patrick Mullan Company. Also, she attempts to simplify her husband’s life during his band, AC/DC’s tours since she knows the in and out of the music world.

Brenda And Her Husband Shares The Same Passion

Seeing Brenda Johnson’s pictures available on the internet makes it clear that she is fond of traveling to various places with her famous husband, Brian Johnson. Besides being a great outdoor enthusiast, Brian Johnson’s wife, Brenda, shares a passion for car racing with her husband. She often participates in car racing events alongside Brian Johnson in the circuits.

The Johnson couple has their own racing website on Brian’s name, where they regularly share updates, photos, and videos of them racing. Brian Johnson’s fans might be glad after knowing that their favorite vocalist’s wife also shares the same passion with him. It looks like their common interests are also one of the many reasons behind their long-running relationship.

Currently, the beautiful couple, Brian and his wife, Brenda Johnson, reside in Sarasota, Florida. We wish the Johnson couple all the happiness in the world.