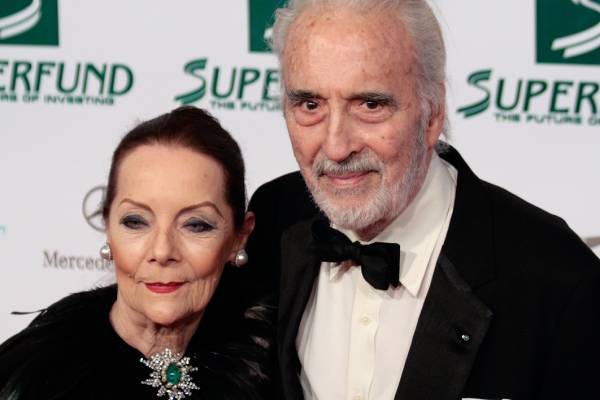 Only a few notable Hollywood actors have had careers that spanned decades and have left an everlasting influence on the entertainment industry. While many people have a negative perception of actors who play villains in films, Christopher Frank Carandini Lee‘s portrayal of Count Dracula in seven Hammer Horror films charmed audiences.

Christopher’s notable works include playing Count Dooku in Star Wars: Episode II – Attack of the Clones and Francisco Scaramanga in The Man with the Golden Gun. People also recognize the actor as Saruman from The Lord of the Rings and The Hobbit trilogy. When it came to giving great performances and leaving the admirers stunned, Sir Christopher Lee was always at the top of his game.

Furthermore, the actor’s heart-throbbing appearances, graceful demeanor, and eye-catching physique caught the eyes of many female admirers. Unfortunately for them, Lee remained devoted to his wife till his last breath.

So, let us learn about Christopher Lee‘s wife, Birgit Kroencke, in this article. Let us also find out what the celebrity wife is up to at the moment.

In 1960, a friend introduced Christopher Lee to Danish painter and former model Birgit Kroencke, a.k.a Gitte Lee. The duo hit it off instantly and got engaged soon after. Then, on March 17, 1961, Lee and Gitte lawfully tied the knot. As husband and wife, they attended several events together and Christopher rarely showed up without his wife. Like two peas in a pod, it was difficult to spot one without the other.

Christopher Lee’s spouse gave birth to their daughter, Christina Erika Carandini Lee, on November 23, 1963. Christina is the couple’s only child, and her parents adored her. Their daughter accompanied them everywhere, and the press would frequently see the three of them hand in hand, smiling from ear to ear.

In addition, the LOTR star used to take his daughter, Christina Erika Lee, and his partner to parks to spend family time together.

Christopher Lee Passed Away In 2015

The family lived happily in Cadogan Square, London, until Birgit Kroencke’s husband, Christopher’s death on June 7, 2015. The actor died at Chelsea and Westminster Hospital after being admitted for respiratory problems and heart failure.

Christopher Lee’s spouse, on the other hand, did not make his death public until June 11 to ensure that their family and friends were aware of his passing before the general public.

The news of Lee’s demise left his admirers in a state of disbelief, with many of his co-workers paying tribute to the actor on social media. The Academy recognized him on February 28, 2016, at the annual Memoriam portion of the 88th Academy Awards.

Christopher Lee and Gitte Lee were married for over five decades. Thus his death must have been difficult for his wife to bear. Still, let us wish Lee’s sweetheart well and hope that her wounds have healed with time.

Before exchanging wedding vows with Gitte, Lee was engaged to Henriette von Rosen in the late 1950s. Lee and Henriette met at a nightclub in Stockholm. The two were set to marry. However, her father, Count Fritz von Rosen, got them to delay the wedding for a year. During the time, he asked his London friends to meet the actor and even hired private investigators to look into him.

Following this, the star had to receive blessings from the King of Sweden to marry, which he did. However, Christopher ended the engagement shortly before the wedding, citing his financial instability. His ex-fiancee understood and agreed to call off their wedding.

Birgit Kroencke Is A Former Model

Apart from being Christopher Lee’s wife, the world also recognizes Birgit Kroencke as a former model and painter. While her earlier works remain a mystery, she has worked with many talented artists in recent years.

In 2016, Birgit served as the cover model for Jo Malone London. She was also part of the CELINE 2010 Campaign. Moreover, Tim Walker shot the gorgeous model for Vogue Italia in 2010.

Even at such an age, Birgit Kroencke is a sensation in the modeling industry. So, let us hope we see more of the stunning model in the near future.

Christopher Lee’s Wife Has Acted In A Handful Of Films

Starting her career as a model, Birgit slowly made her way into the acting industry. Her debut film is the 1961 Danish movie Een blandt mange. In addition to her acting skills, the former model was recognized widely as Christopher Lee’s spouse.

So, it is safe to say that her connections in the entertainment industry did help her bag roles in other films. Some of the movies in which Birgit has appeared, along with the timelines, are as follows:

The movies mentioned above and television documentaries brought a lot of fame to the talented actress. However, it looks like she’s taking a break from the entertainment industry as of late. Birgit has yet to appear in any new series and movies.

Still, if Christopher Lee’s wife ever does decide to return to acting, we are sure she will make a stellar career for herself out of it. So, let us express our best to the celebrity wife and hope to learn more about her in the future.