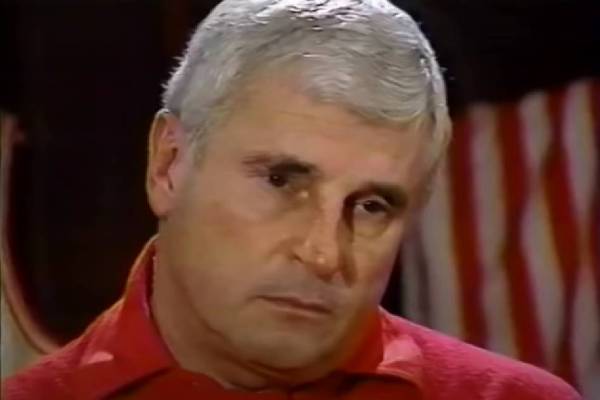 Robert Montgomery Knight is a retired basketball coach who is best known for being the head coach of the Indiana Hoosiers. Mostly known as Bob Knight, the former coach previously held a record of 902 wins in NCAA Division I men’s college basketball games and was given the nickname “the General.”

Bob announced his retirement from the profession on February 8, 2008. After his retirement, the former coach must be blissfully enjoying his life with his family. Many of his fans must be curious about his life as a married man.

So, let’s take a look into who is Bob Knight’s wife and the couple’s married life.

Karen Vieth Is The Second Wife Of Bob Knight

Karen Vieth Edgar is Bob Knight’s loving spouse, moreover, as suggested by the title, he is the second wife of the general. Bob Knight got married to Karen on May 23, 1988, when Knight was 47 and Karen was 41 years old. As it has been reported, it was the second marriage for both the pair.

The pair have been living together as a married couple for 33 years ever since their marriage and will soon be celebrating their 34th anniversary together. The husband-wife duo seems to want to keep their personal life private as both of them don’t seem to own any social media accounts.

Bob Knight and his wife, Karen Vieth Edgar, both share a common love for basketball. They both played the sport and coached other people. That must be why the couple was attracted to each other.

Although she is known as the basketball coach, Bob’s spouse, Karen used to be a winning coach for girl’s basketball herself. She served as the head coach for the girl’s Lomenga High School basketball team, which is located in Kingfisher County, Oklahoma.

Karen has won three Oklahoma basketball titles in 14 years of her career at the mentioned high school. In fact, Bob Knight’s wife had tasted success before their marriage.

As per the reports, Karen Vieth Edgar resigned from the position in 1987. She left after guiding the Lomenga basketball team to Oklahoma State Championships for 3 years.

As we said, Karen is the second wife of the general. Her husband was previously married to Nancy Falk. The former pair first met each other as classmates when they were attending Orrville High School in Ohio together.

After their marriage, the duo welcomed two children, both sons, Patrick Clair Knight and Tim Knight. Pat took Bob’s place as Texas Tech’s 13th head coach after his retirement. Karen Vieth Edgar’s stepson is still working as a coach and a scout even now.

Tim Knight, who is the eldest son of the former coach, didn’t follow in his father’s footsteps. Instead, he graduated from Stanford University with an economics degree. As per a 2000 article by The Washington Post, Tim has a son named Brady Knight. The grandchild of Bob Knight should be in his early twenties at the present.

Married For More Than Three Decades

As mentioned above, Bob and Karen have been married to each other for almost 34 years. Although the couple has been together for over 3 decades, the husband and wife don’t have any children together. The pair must be happy enough with just the two of them. After all, they still have Pat and Tim to call their sons and Karen probably has a close bond with her stepchildren.

We’re sure Bob Knight’s wife is happy and makes him happy as well. Well, with the net worth of the former coach being $15 million, we can assume the couple is living a very comfortable life with each other by their sides.

Nevertheless, we hope their love for each other stays the same for the rest of their lives.