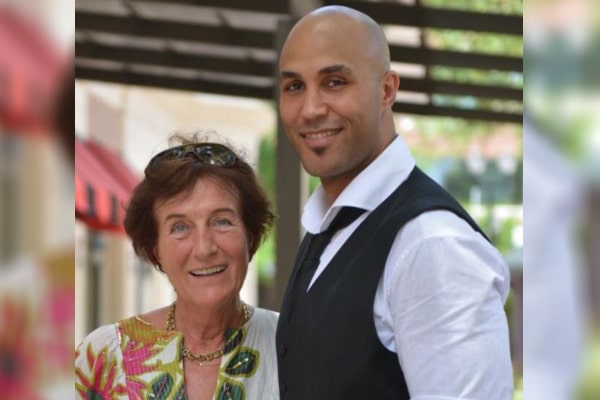 Boris Kodjoe is an American actor of mixed Ghanaian and German-Jewish descent known for his role in 2002 movie Brown Sugar. Similarly, he has also appeared in several other movies/series like Soul Food, The Last Man on Earth, Grey’s Anatomy spin-off, Station 19, etc.

Besides being known as a popular actor, Boris is also a phenomenal person at heart and father of two. Furthermore, he is very philanthropic and always active in the welfare of society and civil rights. However, we barely know about people who brought this beautiful soul on earth, i.e. Boris Kodjoe’s parents. Hence, we shall be tailing Kodjoe’s parents, Eric Kodjoe and Ursula Kodjoe.

Boris Kodjoe’s Mom Is A Psychologist

Boris Kodjoe’s mother, Ursula Kodjoe, is a wonderful woman with a tremendous scholarly background. She is a German psychologist at Ursula Kodjoe Therapy and Meditation. She provides family, couples, and individual therapy as well as family and custody meditation service. Given that Boris has been married to Nicolas Ari Parker Kodjoe for 15 years and together for two decades without significant problems, Boris might have learned great lessons from his mom.

Boris Kodjoe’s mother studied psychology at the Albert-Ludwigs- University in Freiburg, and her LinkedIn suggests that she has been practicing since 1995. Furthermore, her prime focus is on children’s participation in separation or divorce, etc.

Besides her psychology graduation, Ursula also has a diploma in social pedagogue and conducts several seminars on related topics. As of now, Ursula is doing great in her job and living a happy life in Germany.

Furthermore, Boris Kodjoe was raised Jewish in Germany by his mother since his parents separated. It is unclear if she has moved on or not, but she sure seems happy living her private life. Well, she also must be pretty close to her grandchildren, Nicolas Neruda Kodjoe and Sophie Tei Naaki Lee Kodjoe.

Boris Kodjoe’s Father Is A Physician

Actor Boris Kodjoe has a pretty decent and diverse family background. While his mom is a gorgeous German woman, Kodjoe’s father is a Ghanaian physician who migrated to the US with big dreams of the good life. But it’s a world ruled by arrogance and greed so, it was difficult, and Boris has frankly put his dissatisfaction publicly.

Unfortunately, Boris Kodjoe’s father, Dr. Eric Ofuatey-Kodjoe, born on 30 December 1938, is no more, he did live long and witness pretty much everything.

Sadly, there isn’t much about Eric; however, according to his son, he had a pretty tough time establishing himself. Since people determine one another’s status and talent by their skin color, Dr. Eric Kodjoe endured endless racial slurs and racially driven abuse even as the anesthesiology head at his hospital.

Although Kodjoe’s father made several contributions through his medical services, his abilities were questioned, and patients refused to be examined. Despite all of the hurt, Eric kept on helping and saving lives. The half German and Ghanian expressed his thoughts purely via his social media handle.

The kind man, Dr. Eric, passed away on 4th April 2016. Boris confirmed the news via Instagram with a heartwarming caption, asking him to rest easy. He died at the age of 78 and several good deeds.

Code Black actor, Boris Kodjoe’s parents were together for a long time before they parted ways. It is unknown when and where Eric and Ursula got married, but the pair welcomed three children together.

Unfortunately, Kodjoe’s parents separated in 1979. He was only six at the time and then began his estranged relationship with his father. However, things weren’t rough for a long time since the father-son duo patched the rough edges of their relationship pretty swiftly. Boris Kodjoe shared a good bond with his parents whatsoever and has great respect for them.