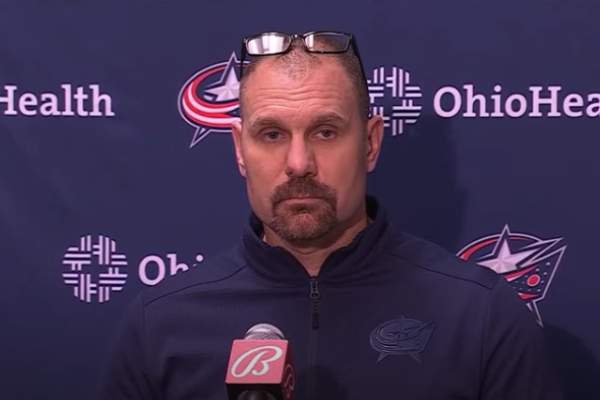 Brad Larsen is married to his wife, Hannah Larsen, and shares two children with her. Image Source: Social Media.

Brad Larsen is a Canadian ice hockey coach and former professional player. He currently serves the Columbus Blue Jackets of the NHL as their head coach. As an athlete, Larsen played for the Colorado Avalanche and the Atlanta Thrashers in the league between 1998 and 2008.

Besides having a successful career in hockey, the coach enjoys a blissful life with his partner and kids. However, many might be unaware of the fact and might be curious to know about his family. Hence, we will learn more about Brad Larsen’s wife and children in this article.

His Spouse Is A Private Person

The 45-year-old is married to his beloved wife, Hannah Larsen. Unfortunately, not much has been revealed about Brad Larsen’s spouse. It is possible that she is a private person and prefers to stay out of the spotlight as much as possible.

Moreover, Hannah doesn’t seem to be active on any social media platforms. In addition, the hockey coach also seems to prefer keeping his personal life low-key, revealing only a little about his family. Likewise, information about the couple’s encounter and their dating timeline has yet to be divulged. Furthermore, the pair has not said anything about when they exchanged their wedding vows.

Nonetheless, we can assume that the husband-wife duo must enjoy a blissful and comfortable life with each other. Let’s hope to learn more about Brad Larsen’s wife, along with the story of how he met her in the future.

Brad Larsen’s Wife Is A Mother Of Two

The hockey coach and his missus, Hannah, share two children, Ty Gregory Larsen and Faith Larsen. Brad Larsen’s daughter, Faith, is his eldest child. Also, the former has always been open about his faith in God. He also once revealed that after the birth of his baby girl, he started believing in God’s existence.

Likewise, Hannah gave birth to their baby boy, Ty, on December 5, 2012. He is currently nine years old and will turn ten in December 2022. Moreover, in the winter of 2019, Brad Larsen’s son suffered a broken jaw after getting kicked in his head by a horse on their family’s farm. It could have been much worse had he been kicked an inch or two higher or to the side, but thankfully, it wasn’t that serious. Ty, who was seven at that time, had surgery to fix his jaw at Nationwide Children’s Hospital and was released the next day.

Brad Larsen’s wife, Hannah, must be an amazing mom to their kids. Likewise, the children must enjoy a comfortable life with their parents. As they are likely still young, Hannah and Ty might be attending school. Nonetheless, we wish the Larsen family a successful, happy, and prosperous life ahead.

Faith’s given name is derived from the Latin word fidere, which means “to trust.”

Likewise, Ty is a gender-neutral name of American origin that means “from the land of Eoghan.” Whereas, Gregory comes from “Gregorious,” meaning “watchful.”