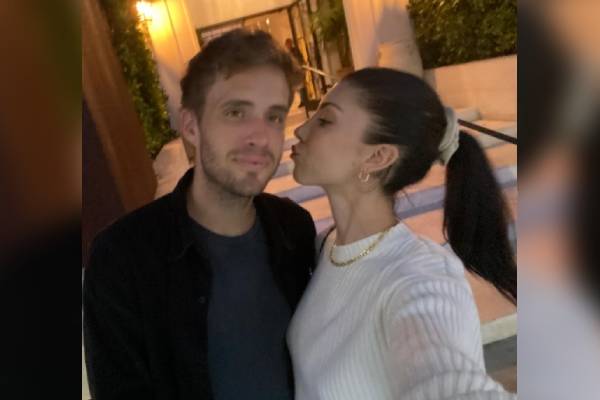 Actress Briana Cuoco is best known for her performances in several films and television series. The California native has impressed millions with her acting skills and continues to do so. Some of her acting credits include The Flight Attendant, Harley Quinn, Beauty in the Broken, and Sugar Mommy. It has been over a decade since the talented performer started her career in the glamour world. Also, she is Kaley Cuoco‘s sister.

Briana has gained considerable fame in her flourishing career. As a result, the gorgeous lady has accumulated a significant amount of attention to her personal and professional life. Talking about her personal affairs, especially her love life, did you know Briana Cuoco’s boyfriend is Brian Logan Dales?

Well, Brian is certainly not a new name in the entertainment world, with his years of experience as a singer. Fans of both personalities must be curious about how long they have been dating and other facts. So, let’s find about that and more in today’s article.

Are Head Over Heels For One Another

As we can see, Brian and Briana both share similar names. Likewise, they must have other common interests as well. But one thing is for sure, the pair are head over heels for one other. Many celebrities try hard to keep their love life under wrap. In contrast, the Cuoco-Dales couple doesn’t shy away from expressing their love and affection and often post photos of them getting cozy on their respective social media accounts.

Moreover, the lovebirds appear to spend a lot of quality time together. We can often witness them attending parties, or simply walking together on the streets with their furry friend. Cuoco and her partner share a rescued dog named Joni. Both often post photos with their pet on IG.

Furthermore, it is not known when the couple began their romantic bond, but we can be assured that they have been together for over a year. As both of them work in the entertainment industry, could it be they might have met through their work circle?

Also Read: Did Idris Elba And Natasha Rothwell Ever Dated?

Brian Logan Dales Is In A Band

Briana Cuoco’s boyfriend is a passionate musician. He is the lead vocalist and one of the founding members of The Summer Set, an American rock band with a huge social media fan following, boasting 43.9K Instagram followers, 105K YouTube subscribers, etc. Moreover, the band’s Spotify account has nearly 600K monthly listeners. Some of their popular songs are Boomerang, Lightning In A Bottle, Teenagers, Chelsea, and Hard Candy.

Jess Bowen, Stephen Gomez, and John Gomez are other band members of The Summer Set. The rock band took part in Macy‘s iHeartRadio Rising Star competition. They were voted the 2013’s Rising Star with six million online votes. Additionally, the band has released its merchandise. Some of its items and their prices are listed below in the table.

As the lead vocalist of The Summer Set, Dales must be earning well. Likewise, Brian Logan Dales’ net worth is heavily influenced by his earnings as a musician.

As reported by Who’s Dated Who, Briana’s partner was in a relationship with famous actress Chelsea Kane Staub. The ex-duo was dating in 2009, and the singer had even written the song Chelsea for his then-girlfriend. Staub had also appeared in the music video. But now, the musician’s heart belongs to Briana.

On the other hand, Brian Logan Dales’ girlfriend was once alleged to be involved romantically with Badflower frontman Josh Katz. However, there were no further details to support the fact, and Brian’s lady love never shared any official statement about the rumor.

Whatever their past affairs were, the couple is now smitten with each other. As the duo’s relationship seems to be going smoothly, will we see them turning their romance into marriage? Hopefully, the actress-singer pair’s love and affection will last forever. We send our best wishes to them.