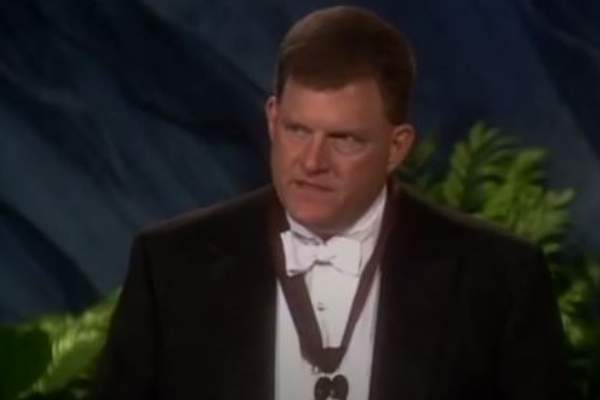 Clayton Ike Bennett, popularly known as Clay Bennett, is a businessman from America. He is the chairman of the ownership group of the Oklahoma City Thunder Professional Basketball Club LLC. Likewise, he serves as the chairman of Oklahoma city-based Dorchester Capital Corporation.

Despite being in the limelight, Clay has kept his personal life private. Talking of which, he is happily married to Louise Gaylord Ennis. So, what is Clay Bennett’s wife doing these days? How many kids have the couple welcomed? Keep reading to find out.

As mentioned earlier, Clay is happily married to Louise. The couple met at high school. The businessman was a sophomore, and his partner was a freshman. The duo dated for some time and eventually tied the knot.

However, the pair have kept their marriage away from the spotlight. As a result, not much is known about their wedding details. But the following years were blissful and happy. Let’s hope we learn more about the lovebirds’ marital life in the coming years.

A Doting Mother Of Three Children

It must have been a lovely journey for the Bennett couple. In all these years of togetherness, the duo has welcomed three kids. Clay Bennett’s children with Louise are Mollie Inez Bennett, Graham Bennett, and Christine Marie Bennett. They all have grown up and must be doing well professionally and personally.

Clay Bennett’s wife gave birth to their son on January 17, 1993, in Oklahoma City. He played football at the Casady School and then attended the University of San Diego. Graham is now happily married to Alex Bennett. Louise Gaylord Ennis’ daughter-in-law signed a contract to produce digital content with Barstool Sports.

Likewise, Louise Gaylord Bennett‘s daughter, Mollie, is married to Samuel Lawson McCurdy. The duo has welcomed a daughter, Francie McCurdy, and a son. So the McCurdy family must be doing well. Similarly, Christine is also married and goes by the name Christy Bennett Lane.

In addition, Clay and Louise’s baby girl is the mother of Charlotte Clayton Lane and Mollie Eleanor Lane. However, there’s not much information about Christine’s husband. Nonetheless, the Bennett couple must be proud grandparents to their grandchildren.

Clay Bennett’s Wife Is The Daughter Of Media Mogul

Furthermore, Louise Gaylord’s dad was a media mogul. He founded the Gaylord Entertainment Company, which included Oklahoma Publishing Co., The Oklahoman newspaper, and others. Unfortunately, Edward passed away in April 2003.

Talking about Louise’s siblings, Mary is a horse breeder, exhibitor, horse owner, and businesswoman. She owns many Hackney ponies and American Saddlebred horses and has won many races with them.

Likewise, Louise’s sister, Christy, previously served as chair and chief executive officer of Oklahoma Publishing Company. Having been born into a famous family, Clay Bennett’s wife must have learned to deal with what comes with being popular from a very young age.

Nonetheless, Mrs. Bennett must be living a good life away from media scrutiny. We look forward to hearing more about her in the coming days. We wish her sound health and abundant happiness.