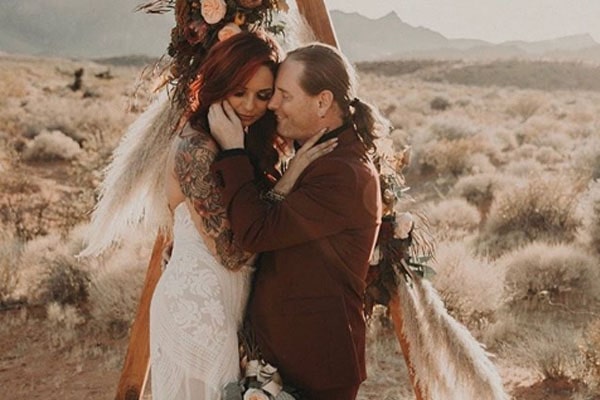 Alicia Dove is Corey Taylor's wife, and they married each other on Oct 6, 2019. Image Source: coreytaylor/Instagram.

After divorcing ex-wife Stephanie Luby, Corey Taylor started to date gorgeous Alicia Dove in 2018 who is super hot. Then the two love birds took their relationship to the net step with marriage on Oct 6, 2019. Their marriage has not been over a year but Corey and Alicia’s marriage have lots more to go.

Metal Giant Corey Taylor has earned a notable place in the Metal scene with the release of five Slipknot Albums with the first two being platinum and other hits from Stone Sour. Speaking of his relationship life it’s been over a year since Corey parted ways with his ex-wife, Stephanie Luby. The ex-couple got married in 2009. Corey also had a wife named Scarlett Stone; their marriage lasted from 2004-2007.

The stunning Alicia Dove is a phenomenal dancer. She is a member of the all-girl dance group Cherry Bombs. The group was created in 2013. Before, Alicia worked as a cheerleader in the NFL, but she left the pompoms for good and became a metal dancer.

Maybe it was during one of the shows where Alicia was performing, Corey couldn’t get his eyes off her. It’s just a hunch though. Alicia also has a good relationship with Corey Taylor’s son, Griffin Parker Taylor.

Corey Taylor’s hot wife, Alicia is a beautiful redhead and a perfect companion to someone metal like Taylor. The gorgeous dancer has got some fantastic tattoos inked in her body with Cryptic meanings and scripts. Take an in-depth look at Alicia Dove’s tattoos and its meanings.

Looking at the bond between Corey Taylor and Alicia Dove, the lovebirds are insanely in love with one another. We might get to see them welcoming a new member of the family pretty soon as well.

The Start Of Corey Taylor and Alicia Dove’s Love

As said before, following Corey’s divorce with ex-wife, Stephanie, he found her replacement rather quickly, and that was/is Alicia Dove. A lovely couple of Corey Taylor and his wife, Alicia Dove is undoubtedly a blessing to them and attraction to many of their fans. Corey and Alicia went on beautiful vacations and posted adorable pictures on their social media handle.

After their vacation in Bora Bora, the lead vocalist of Slipknot Corey admitted that it was one of the best breaks he had in years. We mean it surely would be if everyone’s girlfriend would be as hot as the glamorous Alicia Dove.

The gorgeous Alicia Dove mentioned Corey Taylor as her king and the feeling is mutual as Corey calls her his queen. If you are to check out the Instagram profile of both parties, then you will see how much the lovely pair is into one another.

So excited to celebrate my King @coreytaylor as he receives the Legend Award from @kerrangmagazine_ #KerrangAwards. ?❤

Then, Corey Taylor and Alicia Dove married each other on Oct 6, 2019. Corey sang for his wife, Alicia after the wedding and had a romantic time too. They are so much happy with their married life. We hope their love for each other stays young and never fades away.

New Project Of The Married Couple

The hot couple, Corey Taylor and Alicia Dove have been working on a new project. However, they have not revealed anything about the project. Alicia tweeted out about this on her Twitter and said the project is related to a hobby.

CT and I have been working on a completely new project together (like we need another hobby) and I CAN’T WAIT to share it with you! 🤘🖤😈

She said that she could not wait to share it. Her fans and followers must be very excited and cannot wait to know what the couple’s project is.