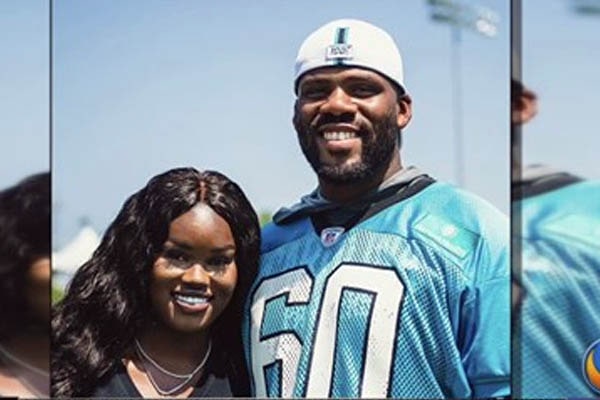 Daryl Williams is a famous American sports personality who currently plays for NFL’s Buffalo Bills as a football offensive tackle. Williams had signed only a year contract with the Bills in 2020. However, he signed a three-year contract extension in March 2021 and is staying with the team. Before signing to Bills in 2020, Williams played for the Carolina Panthers for four years from 2015 to 2019.

The veteran offensive tackle, Daryl Williams, is in a marital relationship with Amber Williams. Recently, after the Buffalo Bills extended their contract with Williams, his fans are curious to know about his personal life as well. So, here, get to be familiar with some details on Daryl Williams’ wife, Amber Williams, and their marital life.

Married To Daryl Williams Since 2015

Daryl Williams married Amber Williams on 4 July 2015. The talented football player Williams is extremely secretive regarding his family life. As a result, the venue and other similar details of Amber and Daryl Williams’ marriage ceremony are still not available for the public. Moreover, the maiden name of Daryl Williams’ wife, Amber, is also a complete mystery to people who want to know about her.

However, we know that Daryl Williams’ wife, Amber attended the same high school as him – Lake Dallas High School. Before meeting and marrying Daryl, Amber used to live in Corinth. However, later, she moved out to Carolina to live with the love of her life, Daryl Williams.

Amber shares a great bond with all of her in-laws. Mainly, she is close to her mother-in-law, Lameca Williams-Hindman, who taught Daryl how to treat women. In fact, Daryl’s mother is Amber’s role model, and she feels very fortunate for being the daughter-in-law of such an inspiring woman.

The Biggest Motivation Of Daryl Williams

Daryl Williams’ wife, Amber Williams, is her husband’s biggest motivation and his number one fan. In an interview, Daryl notes that said he would not have been in the position he is in the present without his beloved wife, Amber. She was his biggest inspiration through overcoming his brutal knee injury in 2018. Also, Daryl Williams’ spouse, Amber, was his stimulus during the period of struggles he faced later.

Furthermore, whenever Daryl faces any problems or controversial situations, his wife, Amber, is always there for him to keep him motivated. Amber was the reason Daryl played amidst the COVID-19 pandemic also. He listened to his wife’s inspiring words and kept on moving ahead. Daryl Williams must be proud of having Amber as his life partner.

Besides his wife Amber, Daryl Williams also takes his mother as his inspiration, who raised him and his other four siblings alone. She was just 14 when she had her first child and was already a mother to five by age 23. Even though Lameca became a victim of an abusive marriage, she taught her kids never to quit, to persevere, and keep fighting. And that’s what Amber’s celebrity husband, Daryl did during his hard times.

Welcomed Her First Child With Daryl In 2020

Five years after their marriage, Daryl Williams’ beau, Amber, gave birth to their first child, a son named Adonis Williams, in the spring of 2020. Adonis arrived healthy weighing eight and a half pounds in Dallas during the coronavirus pandemic. Soon after the birth of their son, Daryl signed with the Buffalo Bills. So, Amber had to navigate motherhood and a new city amidst the pandemic.

Currently, Daryl Williams’ wife, Amber Williams, does not seem to be engaged in any professions. She stays home and takes care of their home and their only child, Adonis, while Daryl goes out for his games. The happy Williams family lives in a condo in Charlotte.