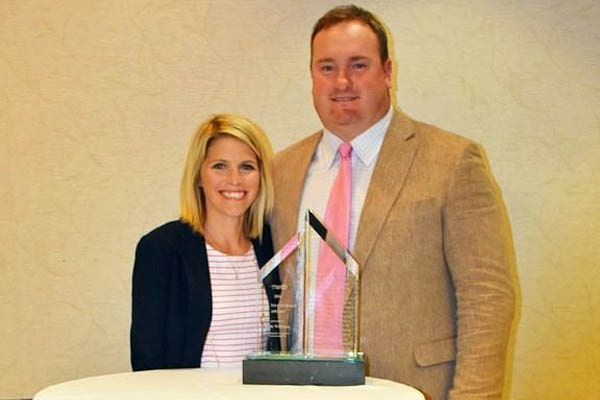 Kyle Williams and Jill Myers have been married since 2005. Image Source: Social Media.

Kyle Williams is the retired American football defensive tackle. He devoted his entire thirteen years career as a player with National Football League’s (NFL) Buffalo Bills. Williams, who played college football at Lousiana State University, was drafted by the Bills in the 5th round of the 2006 NFL Draft. He played thirteen seasons with the team before leaving following the 2018 season. When Williams retired, he was ranked fifth in the Bills history in tackles, and sacks and the associated press described him as the Buffalo Bills’ heart and soul.

The former defensive tackle Kyle Williams is a married man with a beautiful wife, Jill Myers. Though Williams is usually mute regarding his personal life, we have collected some information about his partner. So, be ready to know about Kyle Williams’ wife of over a decade, Jill Myers, who always stands with him through thick and thin.

The pretty blond wife of Kyle Williams, Jill Myers, who goes by the name Jill Williams now, is a graduate of Louisiana State University. She completed her degree in Kinesiology and a concentration in Health and PE from LSU. Soon after earning her teaching degree, Jill Myers spent some years teaching PE in grades K-3.

Furthermore, Kyle Williams’ wife, Jill Myers, was also the equipment manager at her alum, LSU. In 2004, during a Senior Day ceremony, LSU honored her along with other seniors, Regan Hood, Rachel Pittman, and Beth Cowley.

As Jill Myers does not seem to be available on any social media platforms, her current profession is not within the media reach. However, it’s speculated that she might be currently spending her life as a dedicated and busy housewife.

Married To Kyle Williams Since 2005

Kyle Williams married the former Baton Rouge native, Jill Myers, in the May of 2005 in the presence of their few close friends and relatives. The couple met at the age of 19 while they were students at Lousiana State University and began dating soon after. They waited until the completion of their degree from LSU and exchanged their wedding vows at 21 in 2005, and have been enjoying a blissful married life since.

The beautiful husband-wife duo, Kyle and Jill, often appear together in public events. Though Kyle Willaims’ wife, Jill Myers, used to stay in the shadows during her husband’s games, she was often pictured looking pretty fashionable in red carpet events. However, after Kyle’s retirement from the Bills, both he and his beloved wife usually stay away from the media.

A Doting Mom To Five Kids With Husband Kyle Williams

Aforementioned, Jill Myers is a doting mom to five children with her husband, Kyle Williams. They are parents to three boys, Gray Williams, Bennett Williams, Harrison Williams, and two girls, Kate Williams and Anna Claire Williams. Kate is the eldest of Williams’ siblings, while Bennett is the youngest.

In 2015, the Pro player Insiders described Kyle Williams’ wife, Jill Myers, as a Super Mom. After all, she is handling not only her 300-pound defensive tackle husband but also their five youngsters. During a short interview, Jill said that her passion is her kids. She added that being the mom of five is her full-time job, and she loves it.

Furthermore, the pretty and strong Mrs. Williams, Jill’s short career as a school teacher, helped her with her own kids. She knows very well how to keep her young ones busy and moving without getting bored.

Moreover, while talking to Independent Health, Jill revealed how she and her hubby keep their kids from fighting. To keep their children from fighting, kicking, and hitting, they make them wrestle. The doting parents of five, Kyle and Jill, tell their kids to stand in different corners and wrestle by the rules, and if they don’t then, they lose. And, as everyone in their family wants to win, wrestling seems to avoid the fighting.

At the moment, Kyle Williams, his wife, Jill Myers, and their five kids reside in Lousiana. The former school teacher, Jill Myers, is currently a full-time homemaker, and she loves her job.