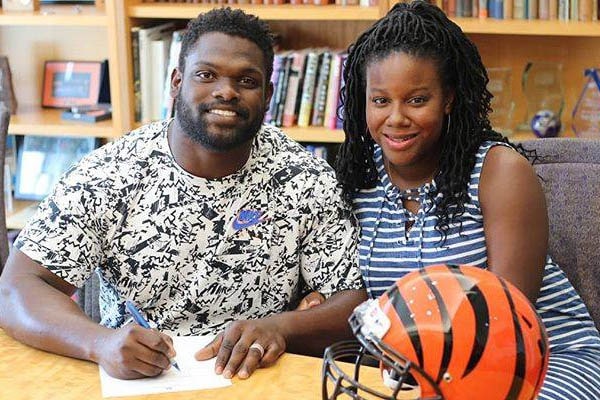 Geno Atkins is one of the best American Football defensive tackles, currently playing for the Cincinnati Bengals of the NFL. Atkins has been selected as a first-team All-Pro twice and Pro Bowler eight times. The son of the former New Orleans Saints and Miami Dolphins safety Gene Atkins, Geno Atkins’s professional career in football has crossed over a decade and has won various titles and awards to date.

The University of Georgia alum, Geno Atkins, is a married man. He is in a marital relationship with a registered pediatric nurse, Kristen Danielle Merritt. Here, get to be familiar with Geno Atkins’ wife, Kristen Merritt, including the details of their wedding day and their children together.

Married To Geno Atkins Since 2016

Geno Atkins and his wife, Kristen Merritt, were best friends and college sweethearts. They first met when both were students at the University of Georgia and fell for each other. Kristen fell in love with Atkins’ character and spirit, while Atkins chose Kristen because he found all the qualities that he searched for in a woman in her. Some years after being in a romantic relationship, Atkins proposed to his then-girlfriend, Kristen Merritt, with a glittering emerald cut diamond ring. They exchanged the wedding vows a few months later, on 25 June 2016, at the St. Regis Hotel in Buckhead, Georgia.

Kristen Merritt and Geno Atkins’ wedding theme was a modern secret garden. On their big day, Kristen opted to wear sparkly blue sneakers to match her bridegroom Geno’s royal blue tux. They wrote their own vows and presented them to one another in vow books. The beautiful bride, Kristen, shared that she felt like royalty on her wedding day while Atkins felt like a king with his boys there celebrating him. He felt on top of the world on his wedding day.

Geno Atkins’ wife, Kristen Merritt’s dad, walked her down the aisle and gave her away. The most shocking moment at Kristen and Geno Atkins’ wedding was the time when Geno shed a few tears of joy.

The beautiful couple, Geno Atkins and Kristen Merritt feel proud to have each other as their life partner. While they are husband and wife, they are still one another’s best friends. Geno Atkins’ beau, Kristen, loves spending every possible moment with him. She is always available for him through the good and bad, be it as a friend or a lover. Moreover, even though things get tough in Atkins’ football career, he loves the feeling that he can always reach his home to a woman who loves and supports him no matter what. We wish for the couple’s togetherness till eternity.

Geno Atkins’ wife, Kristen Merritt, is a doting mother to two adorable kids with her beloved husband. The happily married duo, Geno and Kristen, welcomed their first child, Gene Atkins III, on 29 January 2019. Geno and Kristen named him after his grandpa and dad. The proud dad, Geno, announced the birth of their son via his Instagram and Twitter.

Similarly, Kristen Merritt gave birth to Geno Atkins’ daughter, Isla Elise Atkins, on 9 November 2020 Monday. Their second child, Isla, arrived five weeks earlier than the due date. Geno announced the happy news via his Instagram and also informed his fans that his wife was recovering amazingly. Kristen and Geno often post pictures with their little ones on their social media pages.

Unlike Geno Atkins, his wife, Kristen Merritt, seems to prefer to live her life away from media scrutiny. She is available on social media pages, but sadly they are private. We hope she is doing well in her career as a registered pediatric nurse and enjoying her family life with a loving husband and two little kids.