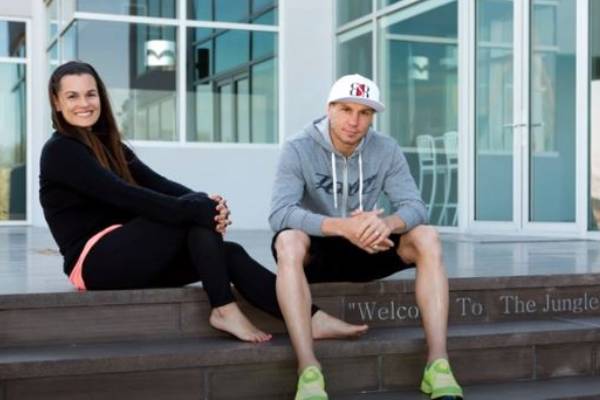 Dave Mirra and Lauren Mirra were married for a decade until his death. Image Source: Social Media.

Lauren Blackwell Mirra is the lovely wife of late BMX rider Dave Mirra. The couple was married for ten years and had two daughters.

Years after the demise of BMX legend, fans are curious about what his wife and kids are doing these days. Thus, today, let’s learn in detail about the late BMX rider, Dave Mirra’s wife, Lauren Blackwell Mirra, and her whereabouts.

Were Married Until Dave’s Demise

Aforementioned, Lauren Blackwell Mirra is well-known as the wife of the late rider Dave Mirra. They first met in the Greenville, North Carolina area. After dating for some time, the love birds tied the knot in February 2006.

The adorable couple of Lauren Mirra and Dave Mirra were married for tem years until Dave’s last breath on February 4, 2016. Since then, Lauren has kept the legendary BMX rider’s legacy alive.

Is The Doting Mother Of Two Daughters

In their a decade of togetherness, Dave and Lauren welcomed two daughters together. As mentioned earlier, the couple tied the knot in February 2006, and the same year, in September 2006, the couple welcomed their baby girl, Madison Michael Mirra.

The following year, Dave Mirra’s wife, Lauren, gave birth to their second daughter, Mackenzie Mirra. Dave and Lauren did not reveal any information regarding their kids and preferred to keep them away from the unnecessary media attention.

While he was alive, Lauren’s husband, Dave, uploaded several pictures of their baby girls. He used to take them to gymnastics, riding bikes, and ice skating. It must have been tough for the young girls to lose their dad.

Dave Mirra’s widow, Lauren, is a yoga instructor. She seems to enjoy yoga and is a registered Holy Yoga Instructor or HYI. According to Heavy, she participated in at least 95 hours of training and student teaching to become a certified instructor.

Lauren launched her own practice in late 2015, which is called Inspired Yoga with Lauren Mirra. She has already conducted numerous classes in the Greenville area. Furthermore, she also had an agreement to teach classes at the Greenville Hilton.

Dave’s wife might be doing great in her job and might be earning significantly. With her income, Lauren has been raising her daughters.

As mentioned earlier, Lauren and Dave were married since 2006 until his death on February 4, 2016. He was found dead of an apparent suicide in a parked truck. Police found him dead by a self-inflicted gunshot wound.

Lauren Mirra’s husband, Dave, was diagnosed with chronic traumatic encephalopathy (CTE). It can be diagnosed only through a brain examination after death.

In one of her interviews post-Dave’s death, Lauren mentioned that she had started to notice changes in his mood. And after it got worse, he could not be present in any conversation or situation.

Following her husband’s death, Lauren even gave an interview with ESPN, where she mentioned their daughters and her husband’s legacy. In addition, after hearing about the BMX rider’s death, several fans and colleagues flocked to social media to share their grief and offer deep condolences to the family.

After his death, Lauren, his friends, and other family members relaunched DaveMirra.com on his birthday to assist youth cycling, and organizations are involved in action sports and support them. Furthermore, the site also has several photos and videos portraying Dave Mirra’s life, on and off his bikes.

As stated earlier, Lauren Blackwell Mirra has gained huge popularity as the late BMX rider Dave Mirra’s wife. However, despite the fame that she has gained, she prefers to live her life in privacy. Besides a few public appearances with her late husband at several events and tournaments, Lauren seems to be loving life away from the unnecessary media attention. Furthermore, she is not active on her social media.

Sadly, we will never get to see Lauren and Dave together again. But we wish her all the best for her future and hope to know more about Lauren Mirra in the coming days.