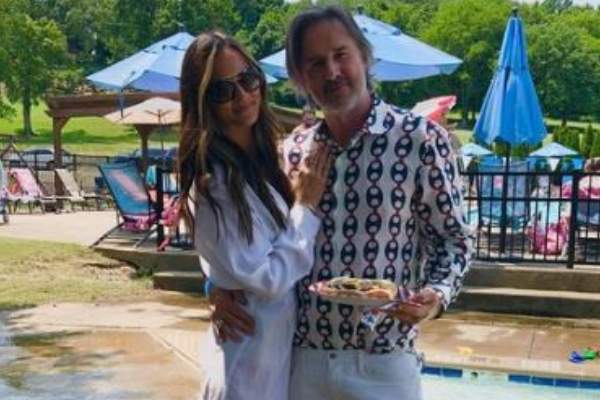 Monica, who was initially a hopeless romantic, finally found her happily ever after with Chandler. Although it has been several years since the last episode of Friends aired, fans to date ship Mondler. Courtney Cox, who portrayed Monica, had an opposite love life to what she had in the series.

Courtney was married to David Arquette for fourteen years before parting ways. Together, the former couple welcomed a daughter, and it must have been quite difficult for them after the divorce. But now, both seem to have moved on in their respective lives with their partners.

In order to know about his current marriage, let’s take a look at this article about David Arquette’s wife, Christina McLarty. How did it start for the duo? Let’s find out.

Met At A Boat Party

As mentioned earlier, David shares a blissful marital life with Christina. The lovebirds first met when she interviewed him on Entertainment Tonight. The duo met again at an ’80s-themed boat party of a mutual friend in 2011. At that time, she used to work as an entertainment reporter and interviewed many celebrities. So, their mutual friends were actually movie stars.

Reminiscing about the time they had their first encounter, David Arquette’s partner revealed that he had about eight outfit changes as he loves wardrobe and costume changes. Although it was a random meeting, she thought it could be a “meet-cute.” Furthermore, Christina McLarty’s husband once revealed that he was very serious about her after their meeting. The couple officially started dating in the summer of 2011.

Unfortunately, the duo broke up for a brief time in mid-2012 but eventually patched things up. Then, in July 2014, David got down on one knee at a Malibu Restaurant during a family dinner. Interestingly, he proposed to her twice that night, once outside and once inside, with few people around. She said yes the second time. Then, on April 12, 2015, the engaged pair tied the knot in the presence of their friends and family in Los Angeles.

It must have been a lovely ceremony. Furthermore, it was the second time the couple walked down the aisle. David was married to Courtney for fourteen years, and Christina was married to Joe Francis, but within four months, they separated.

As of 2022, it has been seven years since the duo tied the knot. The pair have welcomed two children. Moreover, David shares a daughter, Coco Riley Arquette, who was born on June 13, 2004, with Courtney Cox.

In November 2013, it was confirmed that the Arquette-McLarty couple was expecting their first child together. In an episode of The Howard Stern Show, David referred to Coco Arquette as his first kid while describing about his relationship with the paparazzi. When asked why he called Coco his first child, he realized what he’s done and tried covering it, saying he has only one child.

David Arquette’s son with Christina, Charlie West Arquette, was born on April 28, 2014, and weighed 8 lbs. 7 oz at the time of birth. Furthermore, in October 2016, Christina McLarty’s husband shared a video of Charlie holding an ultrasound photo to announce their second pregnancy.

On March 8, 2017, David Arquette’s wife gave birth to their second son, Augustus Alexis Arquette. He announced the news of their baby’s arrival by sharing a picture of the newborn. Augustus’ middle name was also given after David’s late sibling, Alexis Arquette, who passed away in September 2016.

Christina must be close to Coco and is gracefully handling her motherhood duties. Her children must be living a wonderful life.

Was A Competitive Skater As A Child

David Arquette’s other half, Christina McLarty Arquette, was born on April 25, 1981, as the only child of her dad, Bud McLarty, and her mom, Shelley McLarty. She was the first girl child born in five generations of McLartys. In addition, Christian McLarty’s parents thought she would be a boy and even planned to name her Christian.

Additionally, after Christina was born, her grandmother was pleased and even forgave her father for anything he had ever done just because he and Shelley gave birth to a daughter. She grew up having a wonderful time in Hope, Arkansas. She always enjoyed summers in Hope.

David’s spouse was a figure skater when she was a young girl. She went through sixth grade when her family moved to Little Rock. Then they shifted to Los Angeles, where her dad worked in the movie industry, producing live music events and concerts. Likewise, the McLartys moved to Phoenix for a year before settling in Colorado Springs.

Christina Arquette‘s parents chose Colorado because they thought it would be a perfect place for her to train. She was serious about skating and dedicated her life to it. However, life had different plans. She hung up her skates at the age of 15, despite aspiring to compete in the Olympics. She is now involved in a different career.

A Variety Of Career

After graduating from high school, Mrs. Arquette went to New York University and majored in Journalism and English. There, she interned in the press department of then-Sen. Hillary Clinton. Her uncle, Mack McLarty, was chief of staff of President Bill Clinton, which made her realize she was interested in politics but would not take it as a career.

Once Christina watched an interview between Peter Jennings and Bill Clinton, which made her pursue a degree in journalism. After college, she interned with Hillary and in MTV’s news and documentaries division. Her first full-time job was at KATV-Channel 7 in Little Rock, where she was a general assignment reporter. Then, from 2004 to 2006, the gorgeous lady worked at KTVT and KTXA as a correspondent, host, and producer.

David Arquette’s wife gained fame as a correspondent for Entertainment Tonight, where she got to interview famous celebrities. Likewise, she also worked as a reporter at The Insider. She was doing both shows in New York before moving to LA, where she only worked for The Insider.

McLarty has also worked as a producer for several projects. In October 2022, she was appointed president of the Arkansas Cinema Society’s board of directors. In an interview, she talked about wanting to make more films in her hometown.

All in all, David Arquette’s other half seems to be doing well as a mom and producer. She must be making good earnings to her name. Hopefully, she will have more prosperous days ahead in her career.