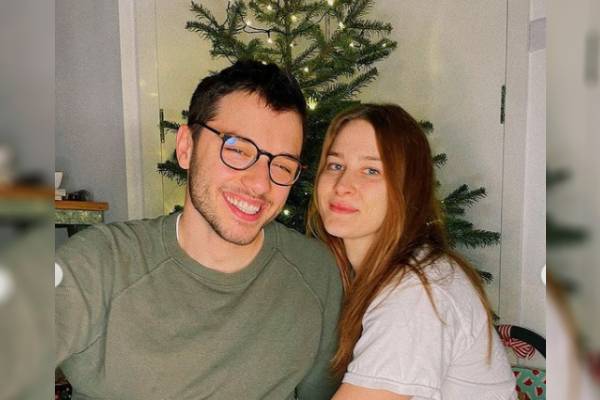 Born as Destry Allyn Spielberg, Destry Spielberg is an American actress and director best known for her role in Licorice Pizza (2021), Rosie (2019), and Mass Hysteria (2019). Also, she is the director and producer for her movie Rosie.

Destry Spielberg is also famous as the youngest daughter of renowned movie director Steven Spielberg and actress Kate Capshaw. In addition to that, the Rosie actress recently got engaged to an actor, Genc Legrand. Hence, in today’s article, let’s learn more about Destry Allyn Spielberg’s partner and their love story.

Is Engaged To Destry Spielberg

Genc Legrand is not a familiar individual in the Hollywood industry. However, he has been in the spotlight thanks to his relationship with the daughter of famous director Steven Spielberg and retired actress Kate Capshaw.

Destry Allyn Spielberg’s partner proposed to her in July 2020, and she said yes! The pair might have been dating since 2017, seeing as the first picture of them together is from the same year.

On the day of engagement, Destry posted a cute picture on her Instagram showing off her beautiful diamond ring. The Licorice Pizza actress seemed all over the moon, and she expressed her feeling through a caption in the post. Steven Spielberg’s daughter wrote that she was excited to take on life with her best friend.

As the couple announced their engagement, family and fans showered their love and blessing through comments on the posts. Both Gene and Destry seem so much in love with each other and spend a lot of time together.

While best known for his association with the Spielberg family, as per Hollywood Reporter, Genc Legrand is an actor from Switzerland. He graduated from the conservatory program at the Lee Strasberg Theatre and Film Institute. Once, Genc posted a picture where he claimed to be at the set of his soon-to-be father-in-law’s highly anticipated movie West Side Story. As per Hollywood Life, he worked as a badge PA on the set.

Destry Allyn Spielberg’s fiancé has also appeared in web series and feature films, including Ketosis and All About Elaine. He has also worked on several productions, including his fiancée’s short movie Rosie and a miniseries Lisey’s Story.

Genc Legrand has also appeared in theatre plays like Death of a Salesman, Cat on a Hot Tin Roof, and Orange Flower Water. Well, it is clear that Genc is attempting to make it big in the industry, and we hope he succeeds in his pursuit.

Destry Spielberg’s fiancé seems to love traveling. He often shares pictures where he is enjoying various outdoor activities. As per Hollywood Life, he has many hobbies, including painting, cooking, and jazz dancing. He also plays soccer and badminton. In addition to that, he seems to enjoy swimming, cycling, and ice skating. Steven Spielberg’s soon-to-be son-in-law is a free-spirit person.

Apart from his hobbies, Destry Allyn Spielberg’s partner is a man of multiple talents. He can speak four languages, English, French, Albanian, and German. It is a really fascinating fact that someone can speak so many languages.

Talking about Genc Legrand’s fiancée, she is also a big fan of outdoor activities. Moreover, she is a model and a competitive horse rider.

Loves Sharing Pictures Of One Another

Both Destry and her fiancé share their picture together without hesitation on their respective Instagram page. The couple spends a lot of quality time with each other. Sometimes they can be seen horse riding while other times they reach the coast of the ocean and spend peaceful moments.

Furthermore, Destry and her soulmate, Genc, were spotted at the premiere of her dad’s movie West Side Story. The love birds are the perfect match for one another. Both of them are content and happy with each other’s company.

Steven’s soon-to-be son-in-law is no exception. Although he shares many pictures of him and his love, he doesn’t disclose any kind of information regarding his personal life. For instance, Genc’s education and family details are still confidential.

Steven Spielberg’s daughter and her partner are happily together and living their life to the fullest. We wish more joy and successful life to Destry and her fiancé and hope to see the pair getting married soon.