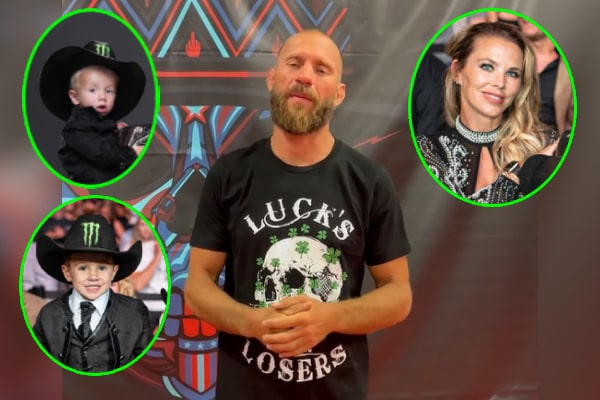 Donald Anthony Cerrone, simply Donald Cerrone, is an American professional MMA (mixed martial artist). He is also a former kickboxer with black belts in Brazilian Jiu-Jitsu and Gaidojutsu. The Colorado native is also famous by his nickname, Cowboy. Apart from that, he is also involved in the entertainment industry and has starred in several movies and TV series.

Cerrone decided to retire from MMA on 03 July 2022, immediately following a submission loss to Jim Miller (36-16) at UFC 276. Will he enjoy his retirement with his loved ones? Well, the fighter has a beautiful family of four, including his gorgeous partner, Lindsay Sheffield, and two adorable kids.

Thus, in today’s article, let’s get to know more about Donald Cerrone’s wife and children. Follow us till the end to learn about the talented athlete’s new career plan and many more.

Well, it’s hard to answer as the pair haven’t clearly revealed about their marriage yet. Several sites address Lindsay as Donald Cerrone’s fiancée, while some claim she is his wife. Also, she goes by Lindsay Cerrone on her IG. So, could it be the duo has already married? Nevertheless, it is evident that the lovebirds share a solid bond and strong relationship. Not to mention their deep love, affection, and respect for each other.

Moreover, Cowboy’s partner was born on 03 June 1984 and grew up in Amarillo, Texas, USA. Although she has not shared much about her parents and siblings, she must have grown up having a happy childhood.

Furthermore, the adorable couple first met in 2014. During a show of the Tapout series of UFC in Amarillo, Texas, the fighter and his friend, Rashad Evans, went to a country bar called “midnight rodeo.” Lindsay happened to be there, and that chance encounter changed their lives forever. Ever since then, the lovebirds have been together and have created a beautiful family.

Lindsay Sheffield is an experienced registered nurse with a demonstrated history of working in the hospital & health care industry. She holds double Bachelor degrees from West Texas A&M University. She studied BS in biochemistry from 2002 to 2008. Afterward, the fighter’s ladylove took a registered nurse course in 2012 and graduated in 2014.

Moreover, the gorgeous lady also holds a Master’s degree from Grand Canyon University. After earning degrees in nursing, Lindsay worked as a registered nurse at Kindred Her from March 2015 to January 2018. She currently serves in the same position at Lovelace Health System. The West Texas A&M graduate has been working with the center since February 2017.

According to US News Money, the average pay of a registered nurse is around $75K per year. Thus, Lindsay Sheffield Cerrone‘s net worth must be significant, thanks to her notable salary. On the other hand, her partner, Donald Cerrone’s net worth is $9 million. Considering the earnings and fortune the couple has amassed in their career, they seem to be living contently.

The Cerrone siblings have an Instagram account which their parents manage. They seem to be growing up with all the love and care from their father and mother. In addition, the Cerrone family spends a lot of quality time together.

Besides, Donald Cerrone’s son, Dacson, was seen attending his first martial arts class recently. Who knows, we might see the little guy pursuing a similar career as his dad in the future. However, even if the Cerrone brothers will choose to pursue their careers in different fields, their parents will undoubtedly support them wholeheartedly. Also, Cowboy’s future plan of focusing on his acting career, his wife and kids must be backing it wholeheartedly.

All in all, the talented MMA fighter’s partner is a well-established nurse, a supportive person, and a doting mother. The gorgeous lady’s both personal and professional lives are going smoothly. We look forward to learning more about her in the coming days. We wish Lindsay and her loved ones a joyful life ahead.