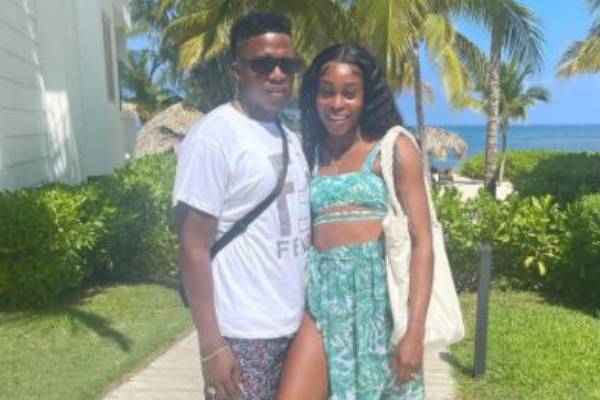 Elaine Thompson-Herah, also known as Elaine Sandra-Lee Thompson-Herah, is a sprinter from Jamaica who competes in 200 and 100 meters. The athlete is considered one of the greatest female sprinters of all time, rightfully so as she is a five-time Olympic champion. Furthermore, in December 2021, she and Karsten Warholm were named World Athletics Athletes of the Year.

Because of Elaine’s achievements and the several titles to her name, she has been able to establish a huge fan base globally. Those fans and followers of hers are curious to learn more about her personal life.

Taling about her life, the successful sprinter is in a blissful marriage. So, in this article, why not learn in detail about Elaine Thompson-Herah’s husband and see what he does.

Dated For A Long Time

As mentioned earlier, the successful Jamaican sprinter Elaine Thompson-Herah is happily married. On November 2, 2019, Elaine got married to her long-time beau, Derron Herah. Prior to the marriage, the couple had kept their relationship lowkey and had not even revealed when and how they met.

Moreover, in a post that Elaine Thompson-Herah’s husband, Derron Herah, uploaded in June 2019, she wore a ring on her finger. So, we can assume that the Herah couple might have gotten engaged in June 2019 or even before that.

As mentioned earlier, Derron and Elaine had not brought their relationship into the limelight. But after the marriage, both of them took to their Instagram and gushed about each other and their marital life. Since then, the duo has not refrained from showing their love for each other.

Is A Former Athlete

Just like Elaine, her husband was also a professional athlete at one point. He went to St. Jago High, and after that, attended Texas Tech University – Rawls College of Business, and graduated with a Bachelor’s degree in Administration Management. Then, he studied Finance at Davenport University.

Talking about his athletic career, Elaine Thompson-Herah’s husband, Derron Herah, is a former St. Jago athlete. As per World Athletics, he began his athletic career in 2001 but retired in 2008. The site also reports that he last competed in Hillsdale Gina Relays in 2008.

As a track athlete, Deron mainly competed in 400 meters hurdles. After ending this professional athletic career, he switched to a different career path.

Who knows, Derron and Elaine might have bonded over their shared interest in athletics.

As stated above, Elaine’s house, Derron, started a different professional career after retiring as an athlete. He started various business ventures and is doing great in his work.

Herah is the managing director of The Loan and Pawn Shop, a small business enterprise that provides goods in great deals. As per the shop’s Facebook page description, it capitalizes on the harsh economic times and provides a service with fewer hassles on time.

Moreover, Golden Trend Boutique mentioned Elaine as the boss lady in one of their Instagram posts. So who knows, he might be the co-owner of the shop along with his wife.

Apart from the business ventures mentioned above, Elaine’s beau also works as a coach. He is the male sprint coach at St. Jago high. Furthermore, he was also a member of the Cameron Blazers setup.

Furthermore, in December 2021, Elaine’s hubby, Derron, was speculated to take over as a coach of hers after her intended split from MVP Track Club. However, it is yet to be made sure if he will coach her.

Derron is supportive of his wife’s achievements and seems to be proud of her. He often posts about her victories. Similarly, Elaine also supports her husband.

The couple loves each other immensely, and let’s hope their marriage remains the same forever. Moreover, when the couple is planning on expanding their family is unknown. But as fans, we wish to be introduced to Derron and Elaine Thompson-Herar’s children soon.