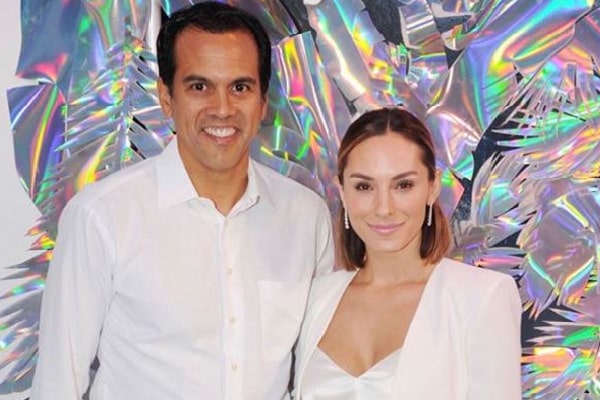 Coach Spoelstra and his wife Nikki Sapp have been together for 4 years. Image source: instagram/nikkisappspo .

Erik Spoelstra is a big name in the National Basketball Association (NBA). He was born to a Philipino mother and American father in Evanston, Illinois, on November 1, 1970.  He is most popular for being an American professional basketball coach for the Miami Heat. Spoelstra is the NBA’s youngest coach, yet he has blossomed as one of the best coaches in the NBA.

Not only that, but Spoelstra is also the first Asian-American head coach to win an NBA championship. With such a fantastic ongoing career, he has been filling the shoes of a Hall of Fame coach which he might have never expected.

Like it’s said, there is a woman behind the success of a man, and the woman behind Spoelstra’s success and happiness is Nikki Sapp.

Erik Spoelstra’s wife Nikki Sapp, who is also a former Miami Heat cheerleader, is the love of his life. The lovebirds met in 2006 during the course of their works in Miami Heat and started dating in 2012.

Loyal and strong love between a dancer and a head coach is not something that we would expect, but things are not always the way we expect. Even though they have an age gap of 18 years, they complement each other really well.

After nearly three years of dating, Spoelstra realized that she (Nikki) was the one. So he popped the question to which Nikki said ‘Yes.’

After dating each other for quite a long time, the couple decided to tie their knot on July 22, 2016. Since coach Spoelstra likes to remain hidden from the media, they decided to have a private wedding. The couple refrained their guests from taking and posting photos online.

The couple managed to keep the wedding ceremony under the radar for some time. Nikki and Spoelstra shared their vows dressed in a floor-length lace-bottom mermaid-cut dress and a white dinner jacket, black pants, and a bow tie. The sacred ceremony was solemnized by a family friend Ron Book. The wedding took place in the gardens of Villa Vizcaya with only about 150 family and friends, which included Heat President Pat Riley and Spoelstra’s assistant coach Juwan Howard.

The open-handed philanthropist requested her guests to donate to the charities instead of the wedding gifts.

This 33 years old is not just a bombshell; she is also a beauty with a brain and a heart of gold. This beautiful lady is all about charisma and character. Erik Spoelstra’s wife Nikki is not just someone who flaunts expensive stuff, but she has a thing for philanthropy and arts. We already know about her love for the contemporary fine arts by her degree in art history.

She had worked three jobs: as a member of Miami Heats dance squad, as a dance teacher, and as an employee in a luxury boutique, during her university days, to get through. She currently works as the Creative Director and Contemporary Fine Art Specialist for Art Angels Gallery.

She also voices up for the Black Lives Matter and does not hesitate to speak for what is right. Erik Spoelstra’s wife is also associated with Miami Learning Experience, which is a school that offers educational programs to differently-abled people. She is a strong woman with a fine career and heart, and we stan for that. No wonder a strict coach like Spoelstra fell for her.

After two years of marriage, the couple wanted to start off their family, so they gave birth to their first child, son, Santiago Ray Spoelstra, in March 2018. It was several weeks before the due date, but luckily everything went normal during the delivery. It was the first time Spoelstra missed the game in ten seasons.  In December 2019, Spoelstra and Nikki welcomed their second child, son, Dante Nicholas Spoelstra. He welcomed his second child by heading back home by leaving his team in South Florida.

Having a second brother was a great deal for Santiago, as he would now have a sibling to play with. We can often see the video clips of him playing with his little brother on the Instagram handle of their mother, Nikki. They might be even planning for a third child; we never know.

Erik’s Spoelstra’s wife Nikki Sapp is a bold, brave, and accomplished woman. Let’s hope that the responsibility of a family won’t stop her from achieving big things (in her career). Kudos to this wonder-woman.