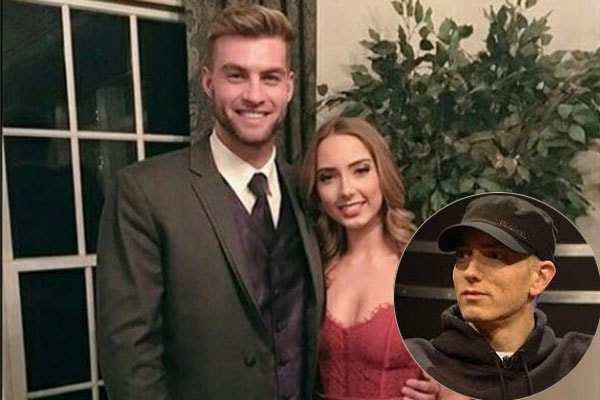 Hailie Jade‘s boyfriend Evan McClintock must be a special guy, and he has got guts for dating Eminem‘s daughter. Hailie and Evan have been dating since 2016. It has been over three years since their dating started, and the pair is still so in love with one another.

Hailie goes by many surnames, including Hailie Mathers and Hailie Scott. Scott is Eminem’s ex-wife Kim Scott‘s maiden name. Everything must be right between Hailie and her boyfriend Evan, or else Eminem wouldn’t approve of his daughter’s relationship or dating.

We have seen Eminem dissing rapper like Ja Rule just for mentioning Hailie’s name in their songs. If you are a fan of the “Rap God” singer Eminem, then you must have heard his daughter Hailie’s name many times in his songs.

Hailie Jade met her boyfriend, Evan McClintock, at Michigan State University in 2015. There Hailie studied psychology, and her partner Evan studied Economics. Eminem’s future son-in-law Evan is a fantastic man as the whole family approves the relationship of the lovebirds.

Hailie often uploads photos of her beau Evan on her social media and let the world catch a glimpse of the cute couple. It looks like Hailie had a great 21st birthday with her boyfriend, Evan, by her side. Plus, the couple also spent the 2017’s Saint Patrick’s Day together with Hailie, stating she felt extra lucky that day.

Despite posting photos of being together, the adorable pair of Hailie Jade and Evan McClintock are rarely seen together in public. But in June of 2018, Kim’s daughter Hailie was spotted strolling with her better-half Evan in Detroit.

So looks like all in all, Hailie Jade is enjoying her love life with boyfriend Evan to the fullest.

Eminem Praised His Daughter And Her Boyfriend

Eminem’s daughter, Hailie, graduated from her college and received a degree in psychology from Michigan State University. She made her dad very proud of her. At the same time, Hailie’s boyfriend, Evan, was also very happy for his other half. Eminem himself stated:

“No babies, she has a boyfriend, but she’s doing good. She’s made me proud for sure. She’s graduated from college.”

Going through Hailie’s Instagram Profile, she often posts photos of her with him. However, she never tags him on social media. It could be that she does not want any media to interfere with her love life and relationship.

Eminem’s daughter, Hailie Jade, also celebrated her very special birthday with her lover, Evan McClintock, and shared few snaps of herself embracing her boyfriend in Dec 2019. Everyone is most probably waiting eagerly to see them getting married soon. We hope the same as well.

Hailie’s Relationship With Her Dad

Although the father-daughter duo is not seen in public, Hailie stated that she is pretty close to her father. We know how much the Rap God loves his child. When rapper Machine Gun Kelly (MGK) tweeted about Hailie, Eminem dissed him in his 2018’s song “Not Alike.” Eminem also had used Hailie’s videos when she was a kid in his 2004 hit song “Mockingbird.” Apart from MGK, Eminem also has a feud with Mariah Carey.

He loves his daughter more than anything in the world and will do everything to see her happy. So, Eminem is glad to see his daughter with handsome Evan and also approves of their loving relationship.