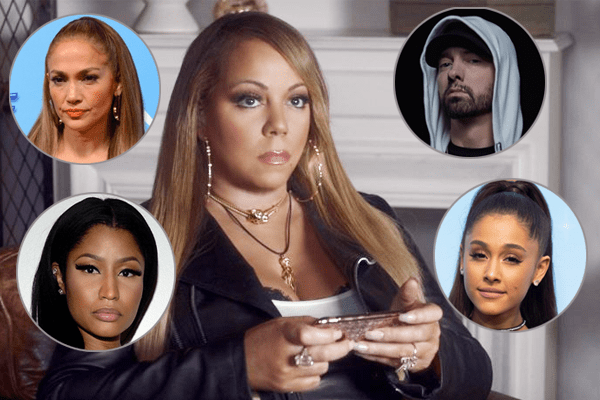 If there was to be a competition on who has the highest numbers of feuds, then Mariah Carey would surely be in the top. Since she has got feuds with a lot of top artists, literally a lot, it would not be a mistake to call Mariah “The Queen of Feuds.”

The list goes on and on if we were to look back at Mariah Carey’s feuds. Mariah is one of the top names in the music industry who has a rundown with many other artists.

Here are some of the few artists with whom Mariah has had a dispute with, in the past.

First of all, Ariana Grande is a huge fan of the singer Mariah Carey and she even covered her song Emotions. While Mariah was in an episode of “Carpool Karaoke” she gushed oh my god after hearing Grande’s song. And later when asked about Ariana, Mariah replied that she wished all the best of luck and hoped that they could achieve longevity.

While Mariah was bagging Grammys in her 20s Ariana garnered her Teen Choice Awards. Poor Ariana, she still thinks of it as a compliment coming from someone whom she has admired since her young age.

Shortly after Jennifer’s music career began, the alleged feud started too. Jenifer is said to stole a track from Mariah with the help of Mariah’s ex-husband Tommy Mottola. The famous singer Mariah once supposedly said that J.Lo was a dancer and didn’t consider herself in the same category as artists.

Although Jennifer had denied about the feud with Mariah. When asked she replied that there has never been any and she always has been a big fan of Mariah. But still, the queen of feud Mariah shades on Jennifer saying she doesn’t know her.

This feud between Mariah Carey and Nicki Minaj reportedly began in 2013 when Nicki appeared as a judge on American Idol. When Mariah was informed about Nicki joining the judging panel, she hung up the phone instantly.

Further, Mariah stated that she didn’t know Nicki Minaj sang or not, she thought that Nicki was just a rapper. Many of their heated up moments could be seen in the episodes of American Idol too.

Not too many have the intention to have a feud against one of the top rappers, Eminem but guess what? The queen of the feud has had her fair share of troubles with Em too. When back in 2001, Eminem and Mariah had collaborated on an album, and a rumor spread that they were dating.

Mariah kept denying about all the rumors, but the “Slim Shady” rapper confirmed about the hookup. When Mariah denied seeing Eminem, Em dropped one of the top diss song titled “The Warning.”

Mariah too dropped a track titled “Obsessed” inspired by Eminem.