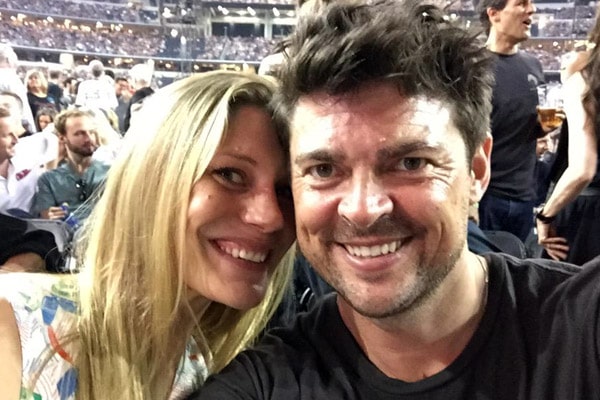 Karl Urban is a famous actor in New Zealand who gained fame after performing in the hit show Xena: Warrior Princess. Urban’s first Hollywood role was in the movie Ghost Ship. Following that, he starred in numerous other films such as The Lord of the Rings, Star Trek reboot, Riddick, and Dredd. Currently, he is busy with his role as Billy Butcher in Amazon’s web TV series The Boys.

Likewise, Karl Urban’s ex-girlfriend, Katee Sackhoff, is also a famous American Entertainment Industry personality. She is an American actress popular for performing the role of Lieutenant Kara ‘Starbuck’ Thrace on the Sci-Fi Channel’s TV series Battlestar Galactica. Also, Sackoff is the voice behind the character Bitch Pudding on Robot Chicken. The winner of the Best Supporting Actress Award on TV in 2005, Katee Sackoff, also starred in several other short movies like The Fearing Mind and Bionic Woman.

The Hollywood Hunk Karl Urban started dating the American starlet Katee Sackhoff in 2014. According to various sources, the two superstars became close during filming on the Riddick set in Quebec, and their love affair blossomed since then. After staying in a romantic relationship for some period, the former pair announced their love for each other and even appeared in numerous public events together.

A year after Urban and Sackhoff began dating, both decided to take each other their home to introduce to their family. In November 2014, Sackhoff took Urban to meet her parents. And after some months, in January 2015, Urban brought his then-girlfriend, Katee, his home to meet his family and friends. Both were familiar with each other’s family.

However, the romance between Karl Urban and Katee Sackhoff did not continue for long. The former lovebirds eventually parted their ways away in 2016. Every fan of Karl Urban was surprised to hear the news of him being separated from his long-time girlfriend. Karl announced the news of his breakup with a quote tweet in a classy way on one of his fan’s tweets about him and Katee.

Hey Scott
Glad you dug The Boys
One small inaccuracy in your article @kateesackhoff and I are no longer together and have not been for over a year .
Katee is a phenomenal woman , a compassionate humanitarian & a brilliant actor . I love and respect her .Thnx K https://t.co/fkZqv5Hw7n

Both parties have not mentioned any significant reasons behind their separation. So, it’s still a mystery regarding what went wrong between Karl Urban and his ex-girlfriend, Katee. Although Urban and Sackhoff are no more together as boyfriend and girlfriend, they seem to be still close as good friends.

After separating, Karl Urban’s ex-girlfriend, Katee Sackhoff, started an affair with the American writer and producer, Robin Gadsby. The girlfriend-boyfriend duo, Sackhoff, and Gadsby led their relationship to a new level by getting engaged later on 10 April 2020. Currently, they are happily living together and seem to be committed to each other. Going through the couple’s Insta posts, it looks like their fans might hear the good news of their marriage soon.

Before starting the relationship with Karl Urban, Sackhoff was previously engaged to her boyfriend of seven years, film producer Scott Niemeyer. Niemeyer proposed to Sackhoff with an engagement ring in 2012. However, they did not marry and ultimately ended their engagement in 2014.

While talking about Karl Urban, there are no rumors regarding his new love relationship. But, before beginning a chapter with Katee Sackhoff, he was in a marital relationship with Natalie Wihongi from September 2004 to June 2014. During their together, Wihongi made Sackhoff a proud father to two kids, Hunter Urban and Indiana Urban.

Currently, Karl Urban’s ex-girlfriend, Katee Sackhoff, is living a contented life with her fiance Robin Gadsby. And Karl Urban is possibly single and busy with his current loves, his two children, and his acting career.