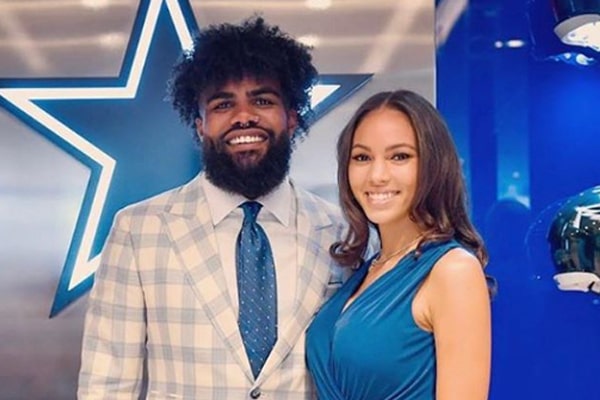 Ezekiel Elliot and Halle Woodard are together since 2017 and are very private about their relationship. Image Source: Dawn's Instagram.

Ezekiel Elliott is an American footballer for the Dallas Cowboys of NFL. The Cowboys drafted Elliott in the 2016 NFL Draft, and the three-time pro bowl selection led the league in rushing yards in 2016 and 2018.

Along with the professional gain followed his relationship. Yes, Ezekiel Elliott is husband material and has been in a relationship with his sweetheart for quite a while.

Fame does not allow people to breathe in private, so leave the dating part alone. However, we nosy heads love to know everything about our favorite players so, here goes nothing.

Famous American football player, Ezekiel Elliott’s girlfriend, Halle Woodard, seems to be a private person and keeps her business to herself. According to Woodard’s Instagram bio, she seems to be working as a nurse by day. Likewise, Elliott’s sweetheart graduated from Iowa State University.

She is a nurse by day and bartends ar Citizen Dallas. Besides nursing and bartending, she also trains at Body Machine Fitness.

Furthermore, Elliott’s girlfriend has sternly warned strangers not to holla at her Instagram if she does not know you personally. Whoah woman! But the bar is set for a reason. Being a potential wife of a famous face can cause a problem and sometimes invite unnecessary attention. Therefore, the wise woman has decided to keep her profile private and details buried.

Are The Couple Secretly Married?

Although Ezekiel Elliott’s love for his sweetheart, Halle Woodard, is immense, he does not post about his to-be wife and the couples’ relationship much.

Unfortunately, the couple is secretive. But, thankfully, Ezekiel Elliott’s mother, Dawn Elliott, is there to rescue all the fans with updates. Therefore, she doesn’t seem to be a mom who would sit behind and not boast about how gorgeous her to-be daughter-in-law is or how dapper Ezekiel looks. Hence, let’s conclude that the pair aren’t married yet but are pretty close to it.

In 2019, Elliott’s mother posted a picture with a beautiful message. She claims her to be her daughter although ‘not related biologically.’ In previous posts, Dawn told that Elliott’s girlfriend, Halle fitted with the family and is an indispensable part.

Ezekiel Elliott’s mother, Dawn, absolutely adores Halle. She is invited to every family dinner and is photographed together. She was also asked for the Thanks Giving dinner, which included Elliott’s entire family. That’s a huge affirmation.

Every couple has their difficult times, and times when they cannot bear arguments and decide to leave.

Footballer, Ezekiel, and his long-time girlfriend were in a break briefly because of the reason mentioned above. The famous footballer was detained in May 2019 in Las Vegas after the couple’s argument got heated.

The pair briefly broke-up after the scuffle and confirmed that they were on a break. However, the break did not last long, and the long-time pair got back together by September. Ezekiel Elliott first met his partner in 2017, the year after he was drafted in 2016.

The pair has been together since 2017 and going strong even after three years without a proposal or gaining unwanted media attention. Let’s hope we get to see them walk down the aisle soon.