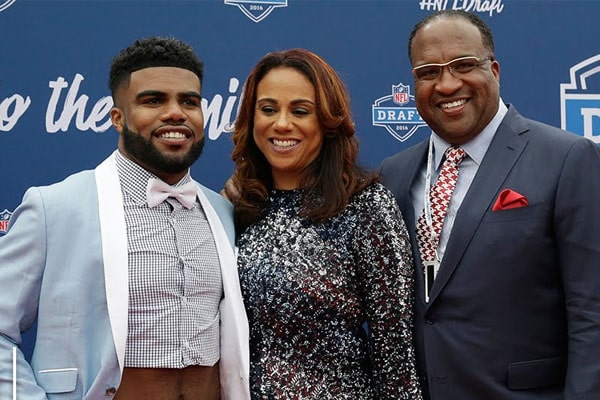 Stacy Elliott and Dawn Elliot are the father and mother of the NFL player, Ezekiel Elliott. Image Source: YouTube.

Ezekiel Elliott is an American football running back for the Dallas Cowboys in the NFL, who made a shining career in the sports area. The Cowboys drafted him in the 2016 NFL Draft. Well, going through his personal life, he is Stacy Elliott’s son with wife, Dawn Elliott.

Ezekiel is not the only son of the married couple but also has two sisters named Lailah Elliott and Aaliyah Elliott. His parents are so much proud of him and his career. They are frequently at AT&T Stadium to cheer and support their son. Dawn and Stacy are well-known faces in the spotlight. Plus they are also very close to Ezekiel’s girlfriend Halle Woodard. But, to know more about Ezekiel Elliott’s mother and father, let’s get underway straight down below.

Stacy And Dawn Elliott Were Both Student-Athletes At Missouri

Well, Ezekiel Elliott’s parents, Dawn and Stacy Elliott, both were student-athletes at Missouri. Stacy played defensive end and linebacker and was on the field during Colorado’s “fifth down”play in 1990.  As for his mom, Dawn, she was also a standout athlete and competed for the Missouri track team in the heptathlon.

However, they could not continue their routine all the time. Stacy and Dawn made sacrifices to help their son pursue his athletic dreams. They had a huge responsibility to provide a high-quality education for Ezekiel and his sisters. Since they were middle-class families back then, they were doing everything to make their children’s life better.

Stacy also said that they did not go on fine trips or live in big houses. Most of the money was spent for the sake of their three children. Nevertheless, as athletes, their family vacations were AAU national track championships held in places across the country. But now, the sacrifices they made have paid off well.

Stacy Elliott’s Concerns Over His Son, Handling The Spotlight

Some months after Ezekiel got selected in the 2016 NFL draft, his dad, Stacy, was concerned over how he would handle the NFL Stardom. He also stated that Ezekiel was like a little boy who wanted to play football, have fun, and enjoy people. Ezekiel Elliott’s father Stacy was probably worried about the consequences of all the stardom and spotlight.

But Ezekiel is just happy to be alive and play for the Dallas Cowboys in the NFL. Perhaps Ezekiel took his dad’s statements thoughtfully, and he seems to be handling his stardom and the spotlight really well. Plus, his parents must be so proud of him and his flourishing career.

Dawn Elliott responded to a since-deleted tweet in April 2017 that questioned the family’s ability to afford a car when Ezekiel was enrolled at Ohio State University. According to Yahoo Sports’ Sam Cooper, the tweet was about the SEC Exposed account regarding a 2015 parking ticket Elliott received. But his mom tweeted out a straightforward explanation on Twitter.

because he had two working parents who afforded it. you act like that’s a Bentley. every Black athlete isn’t from the ghetto Jimmy. https://t.co/ZzPABfywM9

It looks like the tweet raged Dawn Elliott and made her reply with a straightforward answer. She also said that the person who tweeted acted like it was a Bently. So, she shut the person’s mouth with the truth in a savage way.

According to Dallas News, Ezekiel Elliott bought a new home for his family shortly after the Cowboys drafted him in 2016. He had received a $16.3 million signing bonus from the Cowboys. He purchased the house near the place he grew up in St. Louis, Missouri. Man, rewarding his family home, with his purchasing power must have been a great feeling for the NFL player.

The Elliott family was so much happy to see Ezekiel, doing things on his own. As said earlier, the sacrifices Ezekiel’s parents made paid off big time indeed.

Ezekiel Elliott’s Dad Charged After His African Cat Got Loose

Former Ohio State player’s father, Stacy Elliot, was due in Fairfield County Municipal Court after the escape of a serval cat in Canal Winchester in October 2019. Stacy, aka, Stacy El-Muhammad, was been charged with 12 counts by the State Department of Agriculture.

After the animal threatened several humans and attacked a small dog, sheriff’s deputies were forced to shoot it. The State Department of Agriculture and investigators with the Fairfield County Sheriff’s Office executed a search warrant of Elliott’s home. After talking with Stacy, they determined the cat belonged to him and had no required permit to possess the serval cat.

Ezekiel’s dad would face at least six months in jail and $1,000 in fines if convicted on the misdemeanor counts, which could be multiplied by the number of charges.

Nevertheless, we hope that everything went well for Stacy. And we bet that Ezekiel’s parents must be very proud of hiM seeing what he has achieved.