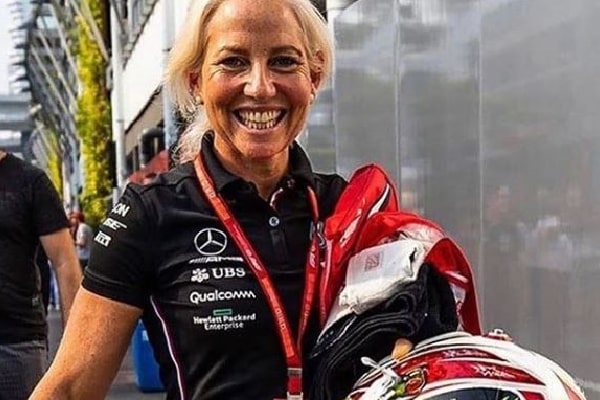 The sports world has become more happening than ever with great sportspersons and athletes. But it doesn’t just end there; there are hundreds and thousands of people behind the stage whose contribution is not directly visible and acknowledged. One of those people is Angela Cullen.

Physiotherapist Angella Cullen, born on August 5, 1974, is a constant face in Lewis Hamilton‘s corner. Cullen, a mother of two, has been with Hamilton, as his physiotherapist and personal trainer, for much of his career, under the Hintsa Performance Company.

This woman is full of wonders; read the whole article to read some mind-blowing facts about her.

Angela Cullen’s love for science and sports, combinedly, ignited her interest in human physique and biomechanics. In a dialogue exchange between her and Hintsa, she mentioned that she always had a love for all kinds of sports, be it: soccer, cricket, volleyball, basketball, swimming, or anything. And during her school days, she was fascinated by maths, sciences, and subjects related to the nature of bodies, such as Physics, physiology, and anatomy.

This interest led her to complete a university degree in health science and physiotherapy. And thus, her career path is highly influenced by those interests.

Previously Trained A Team Of Athletes For Olympics

The British team that she trained bagged gold medals in the 4×100 meter relay. This was a great experience for her since she got to learn more about physiotherapy and human performance.

Well, Angela Cullen is most famous for being the personal trainer of Lewis Hamilton. While Hamilton was on the brink of his 7th championship, he hailed their relationship as “the greatest partnership.”

Angela has been working with Lewis Hamilton since 2016, and Angela seems to be doing everything in the best way possible. They together have claimed a number of titles in the F1 Championships. Hamilton once said,

“People for sure won’t understand it, naturally, because they see it from a distance, but she has been one of the greatest things that has happened to me in my life.”

Angela has not just been his physiotherapist but also an integral part of his daily life. She trains him, motivates him, and takes care of him like nobody else. She is the major reason that keeps Hamilton focused.

ALSO READ: Kiara Mia’s Net Worth – Claims Everything She Touches Turns Into Gold

Angela Cullen and Lewis Hamilton Have The Same Tattoos

In the past few years, the bond between Cullen and Hamilton has become so tight that the duo even shares the same tattoo.

“She’s loyal to Lewis, so loyal in fact, that on her wrist she has loyalty tattooed like Lewis has on his wrist. The inner-circle are loyal to each other.”

So, just by this gesture too, one can see how strong the bond the two people share.

This wonder woman loves cycling as much as she loves studying the nature of bodies. She spent almost a year cycling across South America. She cycled all the way from Ushuaia in Argentina to the top of Colombia.

After she retires, this 46 years old plans to continue her cycle trip from Colombia to Alaska, Russia, Asia, Europe, and Africa.

Angela Cullen is a mother of two wonderful children. While Angela is a physiotherapist her husband works as a cycling coach. She currently resides in Menthon-Saint-Bernard with her family. She has been a wonderful wife and a mother to her children but she remains quite secretive about them. Her husband remains off the social media scene and keeps his personal life under the radar. Angela has managed to handle both her personal and professional life.

Whatever Cullen has been doing appears to be working perfectly with Hamilton. We hope that the duo continues to shine in the coming days and bags different titles before Cullen retires.