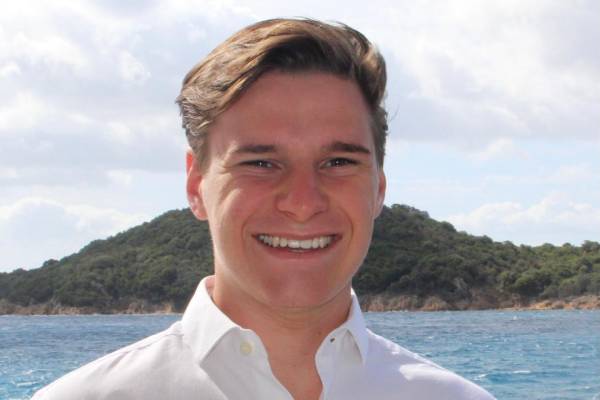 Oliver Daemen will be the youngest person to travel to space. Image Source: Blue Origin Twitter.

Oliver Daemen was a normal 18-year-old who was on the way to join the university in his home country after a few months. However, after securing the spot in Jeff Bezos‘ company, Blue Origin’s maiden flight, he has become an overnight sensation.

So, here are some interesting facts about the Dutchman who managed to win the seat on Bezos’s spaceship.

Is The Son Of Dutch Businessman Joes Daemen

Aforementioned, Oliver Daemen came into the limelight after he was announced as the last person to join Jeff Bezos’ first space flight. While Daemen only became famous in recent days, his dad is a well-known businessman in the Netherlands.

Oliver Daemen’s father, Joes Daemen, is the CEO and founder of Somerset Capital Partners. It is a private equity firm in the Netherlands that has invested in real estate, financial markets, among other fields.

Joes has a Master of Science degree in Agriculture Economics and Marketing. He started as a broker and has now made millions of dollars. Oliver’s dad is undoubtedly counted among the world’s richest men.

So, it is no surprise, the 18-year-old is set to become the youngest person to be in space.

Was The Second Highest Bidder

As stated above, Oliver Daemen’s father is a successful businessman who has amassed a fortune from his career. And Joes was one of the 7K people who participated in the auction to win a seat in the Blue Origin spaceship. The month-long auction concluded on June 12, and the winning bid was reported to be $28 million.

However, though Oliver is the first paying customer to be flying New Shepard, his was not the highest bidding on the auction. The anonymous bidder was apparently unable to fly so, the second-highest bidder was moved up to the first mission.

And while Joes Daemen was the one who paid for the seat, his son, Oliver, is set to embark upon the historical journey.

As an 18-year-old, Oliver Daemen is going to be the youngest human to fly into space. His multimillionaire father was the one who won the bid to the second flight of the New Shepard. But after the first-place bidder pulled out due to scheduling conflict, Oliver managed to become the first paying customer to embark on the journey to space.

Moreover, Oliver will be joined by Blue Origins founder Jeff Bezos, his brother Mark Bezos and aviator, Wally Funk. And just like Daemen, Funk will also set a record. At the age of 82, Wally is set to become the oldest person to fly into space.

Apart from being one of the first privately funded space tours, Blue Origin’s mission will set two more records with the youngest and oldest space travelers on board.

Will Attend The University of Utrecht

Oliver Daemen is one of the most talked-about people in the current scene, and many are fascinated by the Dutchman’s life. And one of the most surprising things about him is that Oliver graduated from high school only in 2020.

The teenager then took a gap year to earn his pilot’s license. However, Oliver is continuing his study and has enrolled at the University of Utrecht. He is starting college this September and is set to study physics and innovation management.

As one of the first civilians to visit space, Oliver Daemen will undoubtedly have a cool story to share with his classmates at the university.

As mentioned above, Oliver is the son of Dutch businessman Joes Daemen and his wife, Eline Daemen. However, he is not the only child of his parents, as he has a sister named Charlotte Daemen.

Oliver Daemen’s sister, Charlotte, is very active on social media. She has shared numerous pictures of her brother as well as her travel diaries. The siblings seem to share a great bond with one another.

Was Fascinated By Space From An Early Age

Becoming the first passenger to fly onboard the Blue Origin’s New Shepard is a dream come true for Oliver Daemen, who has been fascinated by space for years. According to the Dutchman, traveling to space is a lifelong dream for him.

Moreover, Oliver was also captivated by the Moon and the rockets as a four-year-old. He wanted to ride the spaceships, and his dream is coming true.

Furthermore, going through his Instagram, we can see that traveling is not a new thing for the son of a multimillionaire. He has visited several countries around the world, including Belgium, Jamaica, Brazil, and the US.

And while visiting the space is far above his normal trips, there is no doubt that Oliver Daemen is going to enjoy every second of it.