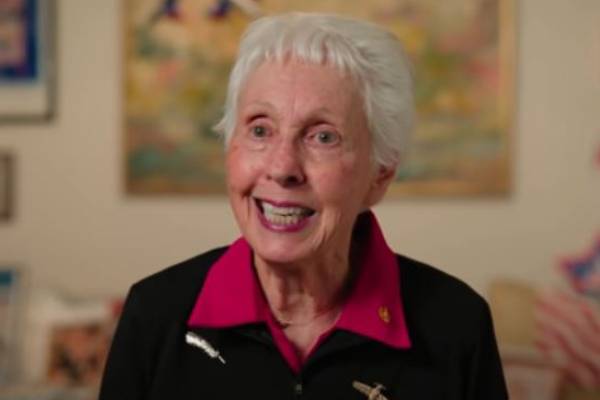 Wally Funk made history as the oldest person to travel to space. Image Source: Social Media.

Wally Funk became the oldest person to visit space after being a part of Blue Origin’s New Shepard’s first flight. She has been an integral part of the American aviation field as well.

Funk has many firsts achievements in her name, and with her new achievement, she has captured the attention of millions. So, get to know Wally Funk and her life story. Also, find out if she broke John Glenn’s record.

Born in Las Vegas, New Mexico, on February 1, 1939, Wally Funk was enamored by space and airplanes from an early age. The daughter of variety store owners was only one when she first saw a plane and developed a passion for its mechanics as she grew up.

Funk’s first flying lesson was at the age of nine, even though she had already tried flying in her family’s barn. Five-year-old Willy donned a Superman costume and leaped off before thankfully landing on a haystack. But her failure to fly didn’t deter her; rather, it fueled her passion for touching the sky.

Aforementioned, Wally was interested in the aviation field from an early age, so it is no surprise that she found success in her career. Funk earned her Commercial, Multi-engine & Single-engine land, Ground & Flight Instructor and Instrument’s ratings from Oklahoma State University.

Funk worked as a Civilian Flight Instructor in the US Army and trained both commissioned and non-commissioned officers. She was also the Chief Pilot Certified Chief Instructor in an aviation company in Hawthrone, California.

After she ended her professional flying career, Wally continued to serve in aviation colleges in various positions. She held lectures and was featured on many television, radio shows, and magazines.

Was Part Of The Woman In Space Program

Since Wally had the dream of flying to space, she volunteered for the Woman in Space Program in February 1961. She was the youngest among the 13 women who graduated from the initial tests. She even scored better than late astronaut John Glenn in some of the tests.

The group of 13 women was dubbed Mercury 13, which was a reference to Mercury 7, a group of 7 men who were selected to fly Project Mercury. The participants, including Wally, were put through painstaking physical and mental exercises. In one of the tests, they were placed in sensory deprivation tanks, and Funk managed to set a record of 10 hours and 35 minutes.

In 1961, Wally Funk was the youngest of 13 in the “Mercury 13” Women in Space programme. Now, aged 82, Wally Funk is finally on her way into orbit with @BlueOrigin. With 8 days to go, we’re wishing her the very best of luck! #wallyfunksraceforspace @SaqiBooks @ScienceNelson pic.twitter.com/ySYx4CpZ6V

Despite excelling in all of the tests, Wally was unable to fulfill her dream of visiting the space. The program was canceled, but Funk continued to keep her hope alive. She applied to NASA 3 times after the organization began accepting women.

However, due to the lack of an engineering degree, Wally was once again disappointed. Even though she was a decorated pilot, Funk’s lack of experience as a test pilot led her to be turned down by NASA.

For years, Wally Funk’s wish to visit space was unfulfilled due to various reasons. However, in 2021, she got the chance to complete her dream after being invited by Jeff Bezos to become a passenger in his aerospace company’s first flight.

Bezos posted a video on July 1, 2021, where he revealed that the veteran aviator would join him in his first visit to space.

Funk, along with Jeff, his brother Mark Bezos, and Dutch teenager, Oliver Daemen blasted off to space on July 20, 2021. The crew spent around 11 minutes on a suborbital flight on Blue Origin’s New Shepard flight.

With the successful flight, the crew set several records. While Daemen became the youngest person to be in space, Wally Funk became the oldest person. She is also the only member of Mercury 13 to travel to space.

As stated above, the Las Vegas native set records after going on her maiden space flight. And yes, Wally Funk broke John Glenn’s record as the oldest person to fly in space. Glenn was 77 on his last flight as a part of the STS-95 crew. Funk, on the other hand, went to space at the age of 82 breaking the decade-old record.

Having already become the first woman to do many things in the American aviation field, it is no surprise that Wally Funk’s flight to space set another record. After the landing, Wally was seen gleefully spreading her arms with a wide smile on her face. The crowd too cheered for her and her accomplishments.

Wally Funk’s career and life story is an inspiration to many young girls around the world. She has overcome many difficulties to fulfill her dreams and is now one of the most popular women in the world.

Let’s hope we get to see Wally enjoying her days with a big smile on her face.