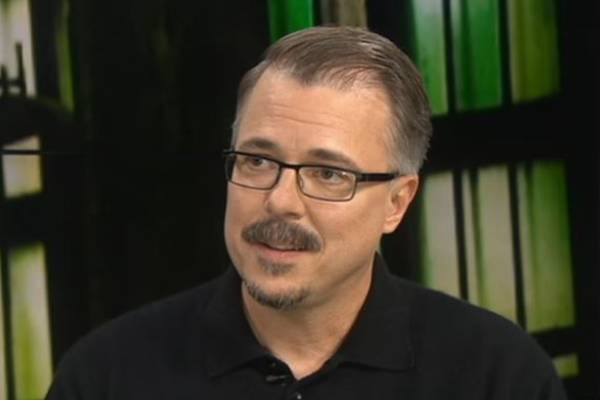 Vince Gilligan and his partner Holly Rice have been together for around three decades. Price is a constant supporter of the creator of Breaking Bad and has been with him even before he found fame. Moreover, she is also a muse for the multi-talented television personality.

The writer, producer, and director of Breaking Bad and Better Call Saul has been in the limelight for many years. But details about his personal life and his partner are scarce. Nevertheless, we have gathered a few facts about Vince Gilligan’s partner, Holly Rice, and their relationship. So stick with us till the end.

Also Read: What Does Alisyn Camerota’s Husband, Tim Lewis Do

Have Been Together Since 1991

Vince Gilligan found fame as a producer of The X-Files in the late 1990s. However, in his personal life, he had already found love long before. Gilligan started dating Holly Price in 1991, and she was with him when he was in his early days in the industry.

Holly and Vince might have been together for more than two decades, but not much is known about their relationships. The pair are very private about their lives, and only a few tidbits about their lives have been revealed yet. One such trivia is that Rice was the one who bought Gilligan’s first pair of designer jeans.

Moreover, Holly Rice’s boyfriend, Vince, seems to be in no hurry to propose to his love. Even though they have been together since the early 90s, the pair have not tied the knot. It seems like Rice and Gilligan are content with their lives without any tags as well as any children.

Nevertheless, seeing their private lives, it won’t be a surprise if Holly and Vince get married someday and mentions it in the passing.

Has Been Referenced In Vince’s Work Multiple Times

Aforementioned, Holly Price’s partner is best known as the head writer and creator of the multiple Emmy-winning shows, Breaking Bad. However, he has also worked on other shows like Better Call Saul, The X-Files, Battle Creek, among others. And apart from Gilligan, one more thing is common among these shows, Vince Gilligan’s girlfriend.

While Vince Gilligan’s partner has never appeared in any of his shows, he never fails to reference her in his works. According to the filmmaker’s longtime friend, Dan Neman, Vince has mentioned her in every script he has written. The most notable example is the character Holly White in the series Breaking Bad. The character was played by several actors throughout the seasons.

Furthermore, Neman revealed that when Gilligan has to mention an address, he uses one of Holly’s old addresses. He also uses part of his partner’s social security and phone number in many places. This shows that Vince has his girlfriend on his mind, even while he is working on his script. And if this does not prove his love for Rice, we don’t know what will.

Like many other Hollywood celebrities, the Better Call Saul creator and his partner also reside in Los Angeles. Living in the “Entertainment Capital of the World” helps Vince further his career and work on several major projects.

However, the glitz and glamour of LA become too much sometimes, and the Gilligan-Rice duo visits Richmond a few times a year. The American writer was born and brought up in Richmond and visits his hometown during his breaks. Also, Holly was a Chesterfield school teacher and administrator before moving to LA with her partner.

Moreover, Vince Gilligan’s girlfriend, Holly Rice, owns a house in the Fan District where the pair stays while visiting. For them, Richmond is still home, and they spend as much time as they can there. And with their penchant for privacy, who knows, they might stay in Virginia for their retirement.

Accompanies Her Partner To Various Events

As stated above, Holly Rice’s boyfriend is not forthcoming about his private life. He has rarely talked about his romantic life, even though Vince references her in his scripts. However, they do make public appearances on occasion. Holly has accompanied her partner on various industry and red carpet events.

Moreover, the duo has maintained a healthy relationship away from the spotlight. But let’s hope we get to hear more about the Rice-Gilligan couple in the coming days.