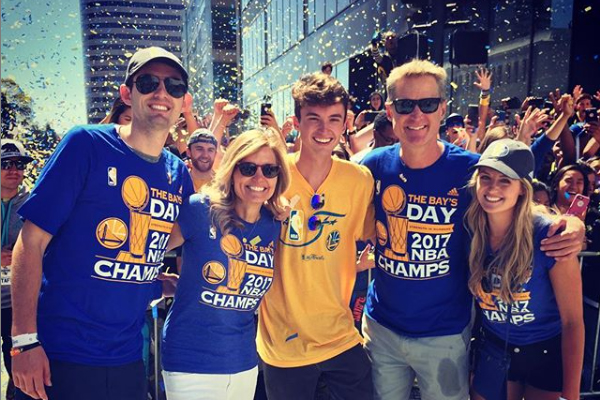 Former Chicago Bulls player, Steve Kerr is one lucky man. He managed to win five titles as a player and three with the Warriors as a head coach. While Steve enjoyed his successful career as a player and a coach, his wife, Margot Kerr was always beside him to witness his victories.

The couple shares a lot of history throughout their decades-long relationship and is still setting remarkable examples for their children as a parent. The couple is excellent at balancing jobs and family time, which could be the key to their successful marriage. We have heard so much of Steve Kerr and his triumphs, but his partner, Margot, has always been beside him silently watching him carry his trophies.

Margot Kerr’s Mother Is A Poet

Margot Kerr is a beautiful person but notoriously secretive at the same time. Famous as Steve Kerr’s wife, Margot has a decent family background.

Although Mrs. Kerr’s details are confined, we do know that her mother, Karen Brennan, is a poet and associate professor at the University of Utah. She teaches in the graduate creative writing program.

Margot Kerr’s mother, Karen Brennan, has written books like Wild Desire, which is the collection of 18 uneven stories. The book won the Associated Writing Programs Award for Short Fiction. Furthermore, her other books include Here On Earth, Monsters, The Garden In Which I Walk, etc.

A Memoir For Margot Kerr’s Sister

Aforementioned, Steve Kerr‘s wife has three siblings, a sister, and two brothers. However, she almost lost her sister, Rachel, in a motorcycle accident.

According to The LA Times, Kerr’s sister, Rachel Brennan, suffered a significant head injury in a motorcycle accident in 1995. The former Amphitheater High School student fell off the back of her friend’s bike near Steamboat Springs, Colorado.

Rachel was rushed to a hospital, but she fell into a coma for three months and was diagnosed with amnesia. While Margot’s sister was recovering, Margot Kerr’s husband, Steve requested that her to be mentioned during his game against Utah Jazz on Thanks Giving.

As of now, Steve Kerr’s sister-in-law, Rachel, has improved a whole lot. Likewise, Kerr’s mother. Karen mentioned that if she were to order a son-in-law from heaven, she would fondly get Steve. Karen further wrote that Steve is a funny, terrific father and is sensitive as well as perceptive. It sounds like a perfect husband and in-law.

The Couple Met On A Blind Date

The couple first met on a blind date fixed by Steve’s teammate, Bruce Fraser, during their sophomore year in 1985. In an interview with SF Gate, Margot told that Bruce might have thought Steve and she would get along as they both are nerdy.

Foreseeable, the couple got along pretty well and walked down the aisle on September 15, 1990. The intimate ceremony took place in Ohio amidst close friends and family.

Throughout their marriage, Steve Kerr’s wife, Margot, had to move always.

Success does not come overnight, and it will check your willingness and strength to achieve the goal. Likewise was with Steve Kerr. The five titles holder did not win his titles easily; he had to struggle a lot during his initial years.

After graduating, Steve Kerr moved around from Phoenix to Cleveland to Orlando. He was struggling to land on a permanent spot on NBA teams. In an interview, Margot revealed that her beau doubted on his career as a professional basketball player.

However, Margot believed in her husband and supported him. She moved along with her husband, and she felt that’s what a family does, support one another. Things changed when Steve landed in Chicago Bulls. Steve won three titles with Chicago Bulls and was moved to Texas when San Antonio Spurs acquired him.

Although not having a permanent place to call home can be frustrating, Steve Kerr’s wife believed and supported him with all her might. Fraser did a great job!

The Golden State Warrior coach, Steve Kerr, and his beloved spouse, Margot Kerr gave birth to three adorable children since their conjugal in 1990. The family of five is an exciting combination of competitive and intelligent members.

Similarly, the youngest in the family, Matthew Kerr, is more of an artistic personality and is preparing for his screenwriting career in Writing for Screen and Television at USC School of Cinematic Arts.

Margot Kerr’s husband is a competitive person in the court and his profession while she is competing in life. The poised woman has established a great example of a perfect family. Besides being in the spotlight 24/7, she has separated her information away and never gained negative media attention.

Let’s hope Steve Kerr’s wife, Margot Kerr continues to flourish in the future, and the Kerr family prospers more in the coming days.